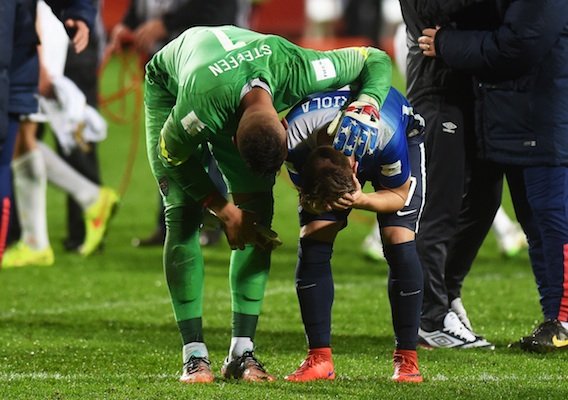 U.S. U-20s Should Be Proud of World Cup Performance

Tab Ramos' under-20 men's national team lost in the World Cup quarterfinals by the slimmest of margins—a shootout loss to Serbia—and will take many positives away from the experience in New Zealand.
BY Brian Sciaretta Posted
June 14, 2015
10:50 AM
THE U.S. MEN'S UNDER-20 NATIONAL TEAM was eliminated from the World Cup Sunday, losing in a shootout to Serbia following 120 minutes of scoreless soccer. Both teams fought hard and played well but the Yanks came up just short in the quarterfinal match. Serbia will now play Mali on Wednesday in the semifinals.

With four players unavailable due to injury or suspension, U.S. coach Tab Ramos had few attacking options available to him. And yet the Americans did not take a back step against a Serbia team that is a legitmate contender for the title.

The shorthanded Yanks were outshot by their opponents but managed to create several chances to find a game-winner and nearly willed themselves to victory. In that regard, it was the U.S. team’s best performance at the World Cup.

The loss stings but there are plenty of positives to take away from the tournament.

Glass is More Than Half Full

Despite being placed in an "easy" group, the Americans performed well in New Zealand and should consider the entire experience a success. The Americans defeated the host nation, a team proved to be a better than expected, and then vanquished a very tough Colombia side that finished in second place in CONMEBOL qualifying.

It's easy to envision many players from this age group going on to have bright futures both with U.S. national teams and at the club level—not only the players who made the World Cup roster; others as well.

Without injuries, suspensions, or club conflicts, this team likely would have made an even stronger showing. Center forward Andrija Novakovich was not released by Reading for the World Cup; Julian Green was not allowed to play in the World Cup due to his previous involvement with Germany at this age group; and Russell Canouse would have been a starter in Germany if not for his injury.

Then you have those players who just missed out on the team. Cristian Roldan is earning significant minutes at Seattle while Zach Pfeffer and Romain Gall also performed well in qualifying. These players are also likely to continue to represent this age group well.

This team is mentally tough

Aside from the timid penalty kicks, all evidence pointed to this group of players being able to take a punch and keep on fighting. Against Serbia, the Yanks started strong, ceded lost control of the match, but then upped their game in the second half. It was encouraging.

Also, the team demonstrated the ability to rebound from a substandard effort. The Yanks didn't play well against Myanmar but responded well by dominating New Zealand. After the loss to the Ukraine, the U.S. team raised its level against Colombia for a hard-fought win. Against, Serbia it played an even stronger game despite a lack of available players.

This team has the sort of mental toughness that should pay dividends down the road.

Steffen is a rising star

The United States is known for producing good goalkeepers but Zack Steffen’s performances in New Zealand will be talked about for a long, long time. He gave the U.S. every opportunity to win games, making a number of crucial plays. And not just the penalty save against Colombia and the shootout saves against Serbia.

Steffen made several big saves and his free kick save in extra-time against Serbia was nothing short of world class. He was confident and made every possible save at this World Cup.

Now he must carry this over as he prepares to begin his first full professional season at SC Freiburg. The sky is the limit for Steffen and he will be in the mix with Cody Cropper for the U.S. U-23 Olympic team.

Its hard to overstate just how well the central defense pair of Matt Miazga and Cameron-Carter Vickers played together.

The duo was one of the best at the World Cup and was easily the best-ever American U-20 central defense pairing. The two complemented each other very well and the chemistry was noticeable. Whether it was controlling aerial crosses, stepping up to intercept passes, or making timely challenges, nothing got by them in New Zealand.

The pair combined for 310 minutes of shutout soccer, including games against two talented sides in Colombia and Serbia.

Arriola Gave It His All

The effort Paul Arriola displayed at the World Cup will endear himself to any American fan who stayed up late to watch all the games. The Club Tijuana attacking midfielder gave more than you ever could possibly think a player could give for the shirt. He covered so much ground to make key plays on both sides of the ball.

When the U.S. pushed forward, Arriola was always involved. Twice he made nice runs down the right side to connect with Tommy Thompson for opportunities in the box. Even as the game wore on in the second extra-time period, Arriola was the player making key offensive runs.

Lost in that, however, was his consistent tracking back to make key defensive plays. Against Colombia, he came up with the goal line clearance late in the game. Against Serbia, he forced turnovers to spring the counterattacks that yielded the best American opportunities.

Emerson Hyndman and Gedion Zelalem were asked to be the co-engines of this team—and they weren't entirely successful.

It was a tricky assignment for Ramos to get right because due to FIFA eligibility issues, Zelalem was not able to play with this team until the camp leading up to World Cup. Typically that's a time when players work on their chemistry but Ramos had to adjust the team’s midfield during that time to accommodate Zelalem. With the addition of the injury to Canouse, a significant portion of the midfield had to be reworked very close to the tournament.

Getting Hyndman and Zelalem to work together was particularly challenging in that their respective skillsets are very similar. Both have small frames, both like to operate centrally to make possession-oriented passes, and both are about the same speed.

Hyndman and Zelalem are clearly both very talented. Perhaps if Ramos had more time with these two players there would have been better chemistry and understanding how each player should operate within the midfield. But that wasn’t the case. Instead, the Hyndman and Zelalem combination seemed redundant.

American soccer fans who want to see this team’s core players together again may get their chance. Here are the players from this U-20 team who I think will be quickly integrated by U-23 coach Andi Herzog and could play a role in Olympic qualifying in October.

Zach Steffen—There is little question that Steffen’s outstanding tournament now has him with a very good chance to join Cody Cropper for Olympic qualifying.

Cameron Carter Vickers—Though just 17, he is physically very strong and he reads the game extremely well. He has one of the highest upsides of any teenage American prospects in the game.

Matt Miazga—The New Jersey native helped his case immensely with a fantastic tournament. Now he has to lock down the starting spot with the Red Bulls and deliver this level of quality performances on a weekly basis.

Desevio Payne—The Dutch-American right back was a revelation in New Zealand. He made virtually no mistakes and the U.S. did not concede a goal during the 300 minutes he played. On the ball, he is very technical. His tactical understanding of the game is also very superior. His future is bright both at the club and international level. On the Olympic team, he would be a fantastic option to push DeAndre Yedlin up into the midfield.

Emerson Hyndman—The Fulham midfielder has developed strong chemistry with many of his American teammates and should be in better condition by October. He missed most of the last three months of the English Championship season due to a collarbone injury.

Gedion Zelalem—As a young player who Jurgen Klinsmann rates highly, Zelalem is likely to make the jump. He showed his quality at times in New Zealand but he will probably be in a much better position to succeed as he gets more time to gel with his teammates.

Paul Arriola—Nobody works as hard as Arriola, a high-energy athlete who will do whatever it takes to make big plays. His effort on both sides of the ball is a true asset and he is a player the team can rally around. He plays like a captain.

Rubio Rubin—After earning nearly 2,000 minutes in his rookie Eredivisie campaign, Rubin is the American most likely to have a breakout season in 2015-16. His game is very polished for his age. At the World Cup, injuries forced Rubin into an uncomfortable position of being a lone forward and as a result he was often stranded.

He is clearly ready to move up to the U-23 where he will have the opportunity to play to his strengths and combine with other forwards like Jordan Morris and Khiry Shelton. The big question is whether Utrecht would be willing to release Rubin for Olympic qualifying. With part of the tournament falling during a FIFA window, there's a chance it could happen.