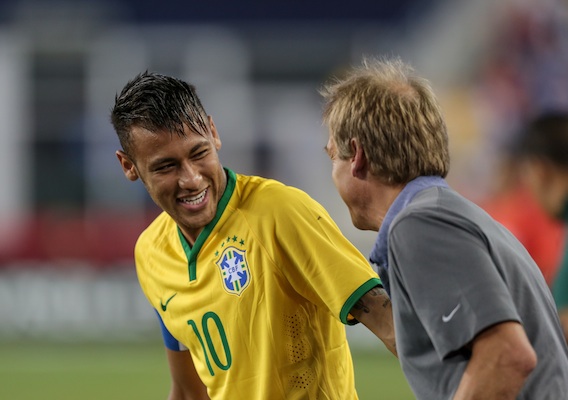 The concerning thing about Tuesday night's 4-1 defeat to Brazil wasn't that the Americans lost, it was how they did so. We've seen this movie over and over again, and it always ends the same way.
BY Brian Sciaretta Posted
September 09, 2015
11:35 AM
ON TUESDAY NIGHT an overmatched and outclassed United States team lost 4-1 to Brazil. While there's no shame in falling to perhaps the most storied and famous team in the history of the game, the way the Americans did so was disappointing, avoidable, and predictable.

Yes, it was a friendly, just as victories over Germany and Holland earlier in the summer were. But the fact is that Jurgen Klinsmann did not have the team in the best position to succeed, and the coach and his players need to scramble for answers that should have been learned long ago. Time is short. The crucial playoff against Mexico is a month away and the squad lacks any semblance of momentum.

That Woeful Back Line

While injuries to Fabian Johnson, DaMarcus Beasley, and Timothy Chandler (his subpar play and history of non-committal for the team is a whole separate problem) gave Klinsmann fewer options than he would have wanted, the backline was always going to struggle. Furthermore, the four defenders who started against Brazil indicate a coach who is not digging nearly deep enough into the player pool for answers.

Center back Michael Orozco has been an average defender in Liga MX and in MLS. He’s had a few solid games for the U.S. team in friendlies but has never been an integral part of an international tournament. With his 30th birthday approaching, he probably won't be. Friendlies are for either learning about the player pool, integrating key young players, experimenting with new ideas, or fine-tuning key players and systems. Starting Orozco accomplishes none of these goals.

Ventura Alvarado is younger than his center back partner, but it is puzzling why Klinsmann continues to fast track him so quickly through the system. After playing well for Club America during its 2014 Liga Mx championship-winning campaign, he was certainly worth a look. But his performances have hardly justified his role as a leading candidate to be a first-choice central defender. Consider this: he is nearly 24 years old and has played just 1609 total minutes of Liga Mx action in his entire career. (U.S. U-20 central defender Matt Miazga just turned 20 and has played 1691 minutes during the New York Red Bulls' 2015 season.) At the moment, Alvarado can't find the field for his club. Alvarado has potential but it's extremely raw.

The central defenders reflect two different types of decision making from Klinsmann. Either he hangs on too long to players who clearly aren’t part of the big picture or he rushes inexperienced players into the team in a fast and forced manner. The combination of the two defenders who have never played together becomes a recipe for an experiment destined to fail.

A Porous and Confused Midfield

Following the win over Peru, Klinsmann scoffed at the idea that he was going to experiment against Brazil. Experiment is exactly what he did. Alejandro Bedoya earned the start in the holding midfield role and afterward he admitted that he never played the position before at the professional level.

While Jermaine Jones and Michael Bradley are two of the most experienced players on the team, their partnership in central midfield has rarely proven to live up to the sum of its parts. Both Bradley and Jones prefer to play in a more free-ranging position and if that is going to be successful, the chemistry has to be very good. Against Brazil, it wasn't good enough. When Danny Williams entered for Bedoya midway through the first half, he seemed confused about his role alongside Jones and behind the more advanced Bradley.

DeAndre Yedlin and Gyasi Zardes were the expected starters on the wing. The Los Angeles Galaxy attacker impressed in a terrific outing against Peru, but struggled against the higher level of competition. Zardes' showing is a reminder that he is still getting used to the wing position and is primarily a forward.

Yedlin can be electric but his inconsistent play and poor turnovers make you wonder about his staying power on the U.S. team. In 2015, he has played one game for his club and he has played 15 games for the national team. If Yedlin, like Alvarado, continues to he play infrequently for his club – with no guarantee yet that it will improve with his loan to Sunderland–you have to ask whether or not it is fair to expect him to be consistently sharp. Klinsmann is right to seek speed. But shouldn't national team players play at least somewhat regularly for their clubs?

The Player Pool Must Expand

This isn't about the upcoming match against Mexico. That game is a month away, and the team is more or less limited to the players that have featured during the past few camps. While injuries forced Klinsmann’s hand in some decisions, injuries are always going to be an issue. Also, there will always be players who are in a difficult period with their clubs and who are out of form. The odds are extremely small that any coach will ever have his best group of players healthy and playing well at one time.

But when injuries hit this team, Klinsmann prefers to play established players out of position rather than try to find options that fit those roles more comfortably. When many of his players aren’t playing for their clubs, he plays them anyway. At this stage in the cycle with the big game against Mexico fast approaching, he might have to stick with these players.

It's fair to ask how it got to this point. Were Gyasi Zardes and Ventura Alvarado the only two new players worthy of being integrated into the team this year after 2014 ended poorly? Could no one else challenge the status quo? Klinsmann is right to talk about competition amongst his roster but there needs to be more competition by way of call-ups and not just among the shrunken player pool.

In a friendly against one of the world’s best teams that doubled as a vital tune-up ahead of the American's biggest game of the year, Klinsmann started two fullbacks who are central defenders, one very inexperienced central defender, another who has been average in Liga Mx and MLS, a holding midfielder who hadn't played the position before, a central midfield pairing that has failed to find its rhythm for the better part of five years, and a recently converted right winger who has played just one club match in 2015. The offensive weapons off the bench were a 2.Bundesliga player who has scored four club goals over the past two years and a college player who has an economics class next week.

What could go wrong?