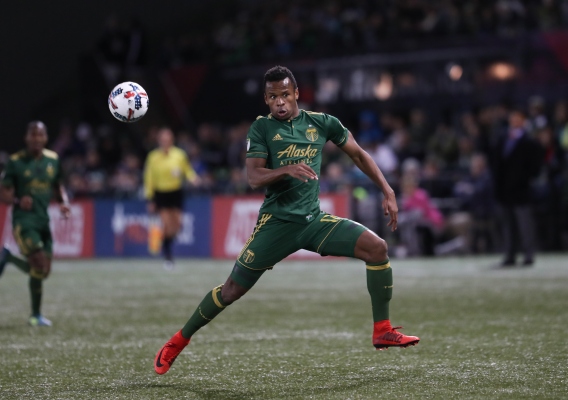 Jeremy Ebobisse has been crucial to Portland Timber's late season push into the playoffs and into MLS Cup. ASN's Brian Sciaretta spoke to the U.S. U-23 hopeful about his growth, Saturday's big game, and his future.
BY Brian Sciaretta Posted
December 04, 2018
10:00 AM
MLS CUP is going to be a big event this year. An enormous crowd of over 70,000 will be on hand at Mercedes Benz Stadium to watch the favored Atlanta United host the Portland Timbers this Saturday. Atlanta has some of the biggest stars in the league, including Miguel Almiron who could set a league record transfer price this offseason, and a head coach who previously managed Barcelona and who is set to take over the Mexican national team later this month.

The fact that Atlanta is at this stage is not a surprise. The fact that Portland is here, is a big surprise. It’s coach, Giovani Savarese, is in his first year in the top domestic flight and its best player, Diego Valeri, is now 32.

Within Portland’s rise, one of the bigger stories has been the growing role of American forward Jeremy Ebobisse who began the year mostly as a reserve player but who has seen his role expand in recent months to becoming the team’s starting center forward.

“Coming into this year, I knew I would have a role to play,” Ebobisse told ASN. “I didn't know what it would be or when it would come. Naturally, the first half of the season was tough but I credit the coaching staff for trying to keep me into it mentally and working with me after training, giving me the opportunity when it came in September. Then from there, because I took that opportunity, I noticed more responsibility was given to me as a member of the team. Slowly but surely, I began to cement my place in the 11.”

“Now it's gone from just trying to fit in to where my teammates expect me to perform well and carry more than just my own weight,” he added. “It's good but there is still a long way to go.”

After a two year career in college at Duke University, Ebobisse was drafted with the fourth overall pick in the 2017 SuperDraft. In his rookie year, he rarely featured and played less than 500 minutes on the season. It really wasn’t until September of this past year when he finally had his chance, which he took complete advantage.

Thus far, the Paris-born but Maryland-raised Ebobisse has three goals and an assist over 869 minutes between league and playoff games (he also scored a goal in his only U.S. Open Cup game this year). But his goals have come at very important times, including at home in a 2-1 win against Seattle in the playoffs and away against Real Salt Lake in a big 4-1 win towards the end of the regular season.

But there is a reason why he has noticeably improved and that he credits to working with the staff after practices on important areas such as his movement to get into dangerous spaces and play with creative playmakers such as Valeri.

“I think my movement has seen an improvement this year, not only in the final third or the box, but in the build-up play as well - where they want me to be as an outlet for the backline,” Ebobisse explained. “But also in the final third, trying to move defenders and try to create space for other people, to create space for myself, and to link up with the guys underneath me. The way we play with a lone striker, a lot of the attacking is going to have to go through me. If I am not in a position to help my teammates, our ability to attack down the middle goes down.”

Savarese has noted the young American’s improvement over the course of the season.

"I think our patience to keep on working with Jeremy throughout the entire season has paid off," Savarese said. "It has made him hungrier, made him understand that every minute counts and that he has to give his best in every second that he plays. I've been very content with his performances in the past games. He has grown tremendously."

MLS Cup could be the biggest opportunity of Ebobisse’s young career but going into Atlanta and coming away with the cup will be especially challenging. But Ebobisse feels prepared for the moment. Thus far in the playoffs, Portland has had to travel into two of the toughest road environments in the United States in Kansas City and Seattle for second leg match-ups. In both circumstances, Portland prevailed.

But Ebobisse knows Atlanta will be its toughest test yet.

“I am a little bit nervous, granted the environment, obviously, is going to be a huge factor for us,” Ebobisse said. “But with that said, at the same time it is kind of contradictory to how we're fearless as well, knowing that we faced a lot of adversity throughout the season and also recently in the playoffs. We went to Seattle and came away from it and then we went to Kansas City after a tough first leg and came away from it as well. Being able to stay in the game and react the way we have, through adversity we've shown who we truly are. Hopefully this weekend won't be any different….We've done it all year. Most recently we've done it in places where we weren't favored to win. We're looking forward to doing it again on a big stage.”

Success in Atlanta this weekend will give Ebobisse a boost of momentum heading into an important upcoming year where he is well aware that the bar will be raised for him.

In 2019, Ebobisse will be challenged to be a consistent performer throughout an entire season for a Portland team that expects to go to the playoffs and advance every year.

Next year he also knows that a huge international opportunity could await with the U.S. U-23 team which will attempt to qualify for its first Olympics since 2008 in the fall. The striker pool for that team is thin and continued success at Portland will likely put Ebobisse into the starting role for that team. His last international opportunity came in 2017 when he was a forward on the U.S. U-20 World Cup team.

Returning to that stage is a priority for him, even if he tries not to think about it much.

“Naturally, you're always aware of that kind of stuff as a player,” Ebobisse said. “How much you choose to think about it is a different question. I am of the belief that if I get on the field for Portland and manage to do well and get some consistency, then there is no reason why I can't translate that to whatever national team I'm being called into for whatever tournament it might be. But it's important to stay in the moment. There is going to be and there has been ups and downs along the way. I need to find a consistent level before I can have these expectations on myself at a national team scale.”

“It's 100% a motivator,” he continued. “I hope my performances with my club get noticed by someone with U.S. Soccer. Right now, this is such a special time with my club and so few people expected us to be in this position. Saturday is going to come quick and I don't have time to be thinking about what if's. This is a special moment and I just want to say in it.”