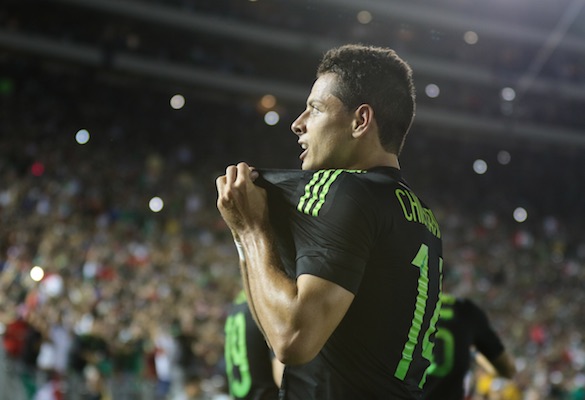 Jurgen Klinsmann picked a bad time to lose his first-ever match to Mexico, as El Tri came to Pasadena and beat the Yanks, 3-2, in a thrilling extra-time contest that will leave U.S. supporters in agony.
BY John Godfrey Posted
October 11, 2015
12:20 AM

THE DAY STARTED POORLY for Jurgen Klinsmann and U.S. Soccer as the under-23 men's national team lost to Honduras, 2-0, and now faces a treacherous path to qualifaction in the 2016 Olympics.

It only got worse when Mexico defeated the United States, 3-2, in the CONCACAF Cup—a one-off match with a significant prize: entry into the 2017 Confederations Cup in Russia.

A raucous, sold out crowd at the Rose Bowl in Pasadena, Calif., witnessed an entertaining match that featured plenty of action and one stark truth: Mexico is better than the United States.

Is that Klinsmann's fault? Will he be axed? Or will U.S. Soccer honcho Sunil Gulati look the other way as his high-profile coach and technical director continues his post-World Cup struggles?

American soccer supporters will be disappointed with the result, but the game itself was scintillating. After a few cautious minutes, it positively erupted.

El Tri took the lead in the 10th minute on a nifty sequence that started with a Raul Jimenez backheel, led to an Oribe Peralta cross, and ended with a Javier Hernandez tap-in past a helpless Brad Guzan.

Five minutes later the U.S. created something out of nothing when captain Michael Bradley delivered a beautiful free kick into the center of the box and Geoff Cameron nodded the ball past Moises Munoz and into the back of the net.

With one-sixth of the game in the books, both sides showed a bit of flair and tremendous desire.

The Yanks nearly pulled ahead in the 32nd minute when Clint Dempsey found Bradley in the center of the pitch. The U.S. captain pushed forward and had Jozy Altidore on his right and Jermaine Jones on his left, but he opted to go for goal and his left-footed strike squibbed wide.

Tempers flared a few minutes later when Andres Guardardo floated a pass to Hernandez, who nodded the ball over to Oribe Peralta. Guzan smothered the ball and the linesman flagged Mexico for being offside, but Guzan took offense at Perralta's aggressive play and shoved the forward to the ground.

A scrum ensued, with lots of players shoving and pointing fingers—much to the delight of the capacity crowd. Klinsmann, meanwhile, stood in his coaching box, shaking his head with disapproval.

The Americans nearly took the lead just before the halftime whistle when Altidore drew a foul, and a yellow card, on Mexico's Hector Moreno on the edge of the El Tri penalty area. Bradley stepped up and took the spot kick and nearly snuck a low shot past Mexico backstopt Munoz, who dove to his right to push the shot away.

The first half ended with the score tied 1-1, but three Mexican players went to the locker room with yellows; Paul Aguilar, Peralta, and Jimenez.

Matt Besler, who lost his spot with the national team after the 2014 World Cup, made two world class blocks just after the intermission. His sprawling saves were reminiscent of Jay DeMerit against Spain the 2009 Confederations Cup—desperate and essential.

Minutes later the Yanks broke out on a promising counterattack. Jones passed to Dempsey who found Altidore, but the Toronto FC striker's right-footed blast went straight to Munoz and was saved easily.

The entire match was a back-and-forth affair. Just before the hour mark Jimenez delivered a clever cross to Hernandez, but the Bayern Leverkeusen striker couldn't get the ball out from under his feet and a great chance went missing.

Both teams pushed forward throughout the second half, but Altidore and Dempsey didn't challenge the Mexico backline with any consistency, and the field began to tilt in Mexico's favor. It's significant that Besler, Cameron, and Guzan were among the top performers on the U.S. squad—they were busy throughout the contest.

The Yanks looked spent as regular time wound down. Mexico was on the front foot over the final 15 minutes of regulation and the Americans were fortunate that the game went to extra time. Besler probably should have been called for a penalty in the final moments when a cross slammed into his outstretched hand, but the referee swallowed his whistle.

To nobody's surprise, Mexico struck first in extra time. A lethargic U.S. attack emboldened Mexico, and after a series of aggressive moves it was Aguilar who delivered the pinpoint cross to Peralta that Guzan could not stop. Seven minutes into the 30-minute period, Mexico led 2-1.

In the 98th minute Klinsmann finally took the ineffective Altidore out in favor of the younger, speedier Bobby Wood. Ten minutes later Wood rewarded the coach with a game-tying goal.

Notably, the U.S. goal was created by two 22-year-old subs, Yedlin and Wood, who sped past their defenders into dangerous positions.

With the game tied and time winding down, the game looked as if it could go either way. Would the U.S. build on its momentum? Would Mexico strike back?

With only minutes to go, an errant Mexico pass deflected high into the air and into the penalty area. A streaking Aguilar put his boot on it from the right flank and drove his volley past Guzan. It was a true golazo, and it gave El Tri an impressive victory in an amazing game.

Mexico will represent CONCACAF in the 2017 Confederations Cup. The United States will stay home.

And Klinsmann—will he still be employed by U.S. Soccer after this defeat? Hard to say. What would you do if you ran the zoo?