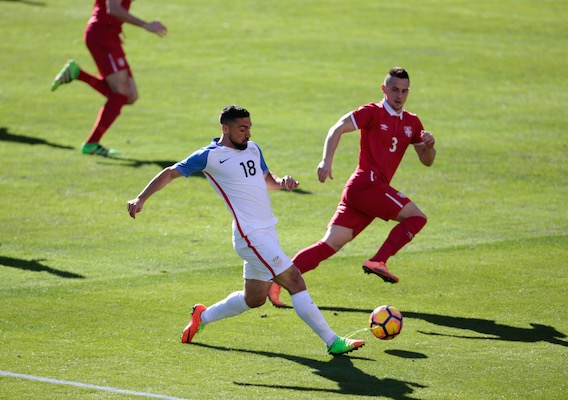 SAN DIEGO—U.S. national team coach Bruce Arena said he wanted to see better passing in the midfield, and he did. He said he wanted his defenders to play better, and they did.

But the American attack could not solve Serbia, the 45th-ranked team in the world, and the first game of Arena's second tenure ended in a disappointing draw at Qualcomm Stadium in San Diego.

The stage was set for American striker Jozy Altidore to steal the spotlight. The 27-year-old New Jersey native earned his 100th cap on Sunday and was the featured striker in the attack, but he received little service from his teammates—and, it must be said, did not put himself into good positions—and was a non-factor in the game. All told, the Americans only managed one shot on goal.

At Saturday's press conference, Arena strongly suggested that the formation he adopts for the Serbia and Jamaica games would be the same one he used in the World Cup qualifiers against Honduras and Panama in March. He opted for a 4-2-3-1 setup, with Graham Zusi at right back and Greg Garza left, bookending Steve Birnbaum and Chad Marshall in the center of defense.

In the midfield, captain Michael Bradley and Jermaine Jones shared defensive midfielder responsibilities while Sacha Kljestan served as the No. 10 flanked by Darlington Nagbe and Alejandro Bedoya. Jozy Altidore, celebrating his 100th appearance for the U.S. national team, started alone up top.

Jones is suspended for the March 24 home game against Honduras so somebody will have to step into that slot next to Bradley.

The Americans took the game to Serbia early, controlling possession for the first 20 minutes thanks to some high-pressure defending and quality one-touch passing. True to his word, Arena had his backline push up into the midfield, and this tactic clearly frustrated the visitors.

In the fifth minute, Altidore drew a foul—a bit cynically, it appeared—setting up a free kick in the middle of the pitch and 25 yards from goal. Kljestan stepped up to take the spot kick and promptly slammed the ball thigh-high into the center of the wall.

Kljestan was busy in the opening minutes of the match. He dispossessed a Serbian midfielder at the nine-minute mark and delivered a nifty pass to Bedoya on the right wing. The Philadelphia Union midfielder’s cross did not find its target, however—a recurring theme—and the chance fell away. Kljestan also made the Yanks’ only real defensive play of the first 20 minutes, heading away a well-placed Serbian cross.

The Americans looked rusty at times, and communication appeard to be an issue. In the 20th minute the U.S. midfield and backline got their wires crossed, and Serbia sustained its first real push in the U.S. half of the field.

Nagbe was extremely active and dangerous on the left wing. He connected with Kljestan and Jones multiple times, and showed his technical flair on repeated occasions. Nagbe nearly found the upper corner in the 29th minute after some nifty buildup play, but the ball sailed over Filip Manojilovic’s goal.

In the 39th minute Jones found Nagbe in the left channel, and the Portland Timbers attacker created some space for himself only to push his shot wide.

As the first half ended, neither team could complain about the score, although Nagbe probably should have connected on either or both of his chances.

Sebastian Lletget came on for Jones to start the second half, perhaps signaling Arena's intentions for the Honduras match in March. Lletget, who earned his first cap on Sunday, looked good early, setting up Altidore with two clever passes within his first five minutes.

The Los Angeles Galaxy midfielder also made a lovely cross in the 58th minute, but Kljestan's floated header missed the mark.

The second half wasn't a work of art, as both teams cycled in numerous substitutes, and both teams struggled to sustain attacks. Beginning around the one-hour mark and continuing for a good 15 minutes, Serbia controlled the contest. Its attacks weren't pretty, but by working wide and dropping the ball into a free-for-all in front of Nick Rimando's goal, it did manage to create a few messy half-chances.

Altidore didn't have a good game, but it's hard to lay the blame at his feet.

Both teams came close in the final moments. In the 89th minute, Serbia's Lazar Jovanovic raced down the left side and had a clear shot on goal, but Rimando sprawled to stop what would have been an embarrasing game-winner.

Less than a minute later, substitute Chris Pontius found the ball at his feet in front of goal and could have been the hero but he pushed his shot wide to the right.

In the end, neither team deserved to win.