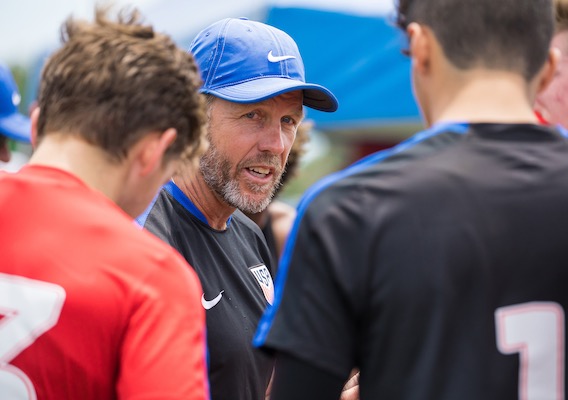 U-17 Coach John Hackworth Has High Hopes for India

The U-17 World Cup begins in early October and U.S. coach John Hackworth is confident that his team is a legitimate contender to lift the trophy. ASN's Brian Sciaretta spoke to the veteran coach.
BY Brian Sciaretta Posted
September 22, 2017
12:00 PM

THE UNDER-17 MEN'S WORLD CUP in India is just weeks away and the United States team is in its final preparations in Florida before it travels to New Delhi for its first game on October 6.

Head coach John Hackworth is optimistic about his team’s chances. Over the past two years, the U.S. has posted some impressive results in this age group, securing wins over top teams including Brazil. Hackworth's side is capable of scoring a ton of goals thanks to players such as Josh Sargent, Tim Weah, and Andrew Carleton leading the way.

Here is the full squad.

Hackworth, 47, is now in his second stint running the U-17 team. The Florida native was a U-17 assistant from 2002-2004 before taking the head coaching job for both the 2005 and 2007 U-17 World Cups. In 2005, his team won its group but fell to the Netherlands in the round of 16. In 2007, the Yanks advanced out of group play but lost to Germany, also in the round of 16. Following that tournament, he served as Bob Bradley’s assistant with the full national team and then coached the Philadelphia Union from 2012-2014. ASN spoke with Hackworth about the team, the tournament, and the progression of youth development in the U.S. The below piece has been lightly edited.

Brian Sciaretta for ASN: Heading into your final camp before the U-17 World Cup in India, how confident are you right now?

John Hackworth: I would say that we feel really confident going to the World Cup in India. We feel like we're well prepared and battle tested. We've already beaten 10 out of our possible 23 opponents in the World Cup—and some of the heavy hitters and favorites, for sure. This is a really good team in a lot of different ways—from talent, to character, to depth. We're not without chinks in our armor and on any given day anything can happen. These are still 16- and 17-year-olds, and we even have a 15-year-old in our pool with George Bello. But we feel good about it. I don't want to boast or brag but the work we've put in the past two years and the results we've had, there are reasons for us to feel optimistic about what we can potentially do.

ASN: The last time many American fans watched your team play, it was at the World Cup qualifying tournament in April. The team played well and nearly won the final but due to a late rally by Mexico your team finished second. What did your players take away from qualifying and how much has the team changed in the last few months?

Hackworth: There's always going to be adjustments because at this age, the player pool changes pretty rapidly. With teenagers you have players who are playing pretty well, some will hit their stride at a certain moment but others will start to struggle. Some of that depends on playing time. Some of that depends on where they are, or injuries. There's a lot that changes between qualifying and the World Cup. The core of players that represented our team at qualifying are the same. But what we learned at qualifying is that we played a team in Mexico that was very good in the second game of the tournament and beat them. We rotated our roster for two of those matches and used our whole second team and we were still successful. In the final, it wasn't a great game by either team, but we were winning that game into injury time. If anything, we are going to use that as motivation because we felt like we should have won the championship there. That's always been a goal of this group. We've won some international tournaments. We've made the final of almost every event we've been in. The level of expectation from the players is very high and we all have a little bit of a sour taste in our mouth from that event. We want to go prove ourselves at the World Cup.

ASN: What is your benchmark for success in India?

Hackworth: I think we would be very disappointed if we didn't reach, at a minimum, the final eight. But, in reality, our approach is always just to take it one step at a time. You have to manage the group stage. You have to get out of your group and that is difficult in a World Cup. We have some challenges with the group of opponents we have. We don't want to look past it. Because we've been successful the past two years the expectation is to go there and ultimately be a team that can compete for the World Cup. It's something all of us have talked about internally since the start of the cycle.

Hackworth: The challenge is great and I think it's more mental than anything. But I will tell you that Josh is a very level-headed person. He is extremely confident in his own abilities and yet he understands and he gets it. His feet are firmly on the ground. He's got good values. He's a humble person. He understands his responsibilities to this team. He also has a lot of support around him. We're not even talking about how many goals he's going to score or that he has to win the Golden Boot.

All we talk about is "Josh, if you do your job, if you play the role we ask you to play, that's all we expect. You don't have to do anything crazy. And it's not about you individually. You're a good player. If you do that, we think you'll get goals, for sure, because that's just how good you are."

ASN: A big thing for the U-17 team beyond results is pushing players into the U-20, the U-23, and eventually the senior team levels. Looking back on previous U-17 teams, we see some that were not successful with many players never going on to have much of an impact at higher levels. Will players on this squad move up the ranks within U.S. Soccer and make noise with the senior team?

Hackworth: I'm very optimistic. My No. 1 priority and my staff's No. 1 priority is player development. And we now have a structure at U.S. Soccer that is so far advanced from the first time I had this role. In the last year alone we had approximately 90-plus players come in and spend at least a week with us because the pool of talent in this specific age group is very deep. We're confident in terms of this class. There's going to be players that advance because the competition just to make this team is high. The motivation for players who don't make a team is there. It's still a maturation process from this point forward. We feel like we provided a learning environment for a very large pool of players. It's a talented group of players too, and that bodes well for the future.

When I look at numbers and stats, it's often not the guys who star at the U-17 level that reach the highest levels later on.

ASN: How has the youth national team structure evolved to improve development? What has changed over the years?

Hackworth: Tab Ramos deserves a lot of credit. A full-time U-19 coach, U-18 coach, a U-16 coach, a U-15 coach—this is the first time we've ever had that. We're working together. On the big picture, we've grown other parts of US Soccer, from the Development Academy and we now have a talent ID department. The scouting department was people working in the Development Academy and doing scouting. That is now separated. We have a high-performance department now. There are so many growth areas within US Soccer and the idea is those things trickle down and produce a collaborative effort with our clubs. And our clubs are now investing more in youth development than ever before.

The hard part, as a nation, is that I hope we can just be patient because you can't measure these things in years. It usually takes five years just to look at things.

ASN: With the end of residency, how is the U-17 team going to change? Obviously you must feel it is time to end residency but what will be the challenges in the upcoming cycles?

Hackworth: That's what our opinion is. We need to trust our partners and trust our clubs to do what we were doing in residency. I think we're there.

The changes can be subtle or massive but it's trending and pointing in the right direction. We are doing a better job in player development. Those things take time but our trust is in now the fact we don't need residency to now develop players. We need to work with clubs, coaches, and directors—and now it becomes about how we identify the players and bring them together in national team camps and provide them international opportunities they can't get at the club level. Then it comes down to selection and, at the end of the day, preparation for qualifying or the World Cup. It will be different but we understand how it works. It's the same as the U-20s.

ASN: How have you grown as a coach since the last time you were the U-17 coach? Do you want to return to the professional ranks at some point or are you happy coaching the youth levels?

Hackworth: I am extremely fortunate for the opportunities and experiences I've had at both the pro level, the senior level, and the youth level. I've grown so much as a coach since the first time I was in this position. I am confident in my abilities. I am also humble to know that I constantly need to learn more. I study different coaches, different clubs, and different tactics. I recently went through the first pro license that US Soccer offered. That was an incredibly good experience for all of us who took it. Residency was so unique because you got to apply your craft every day. Because the player pool is better, it allows you to try new tactics and look at things differently.

You always want to grow as a leader and how you manage your staff and your players. How do you motivate them? In the end of the day, my aim is to coach the rest of my working days. I love coaching seven- or eight-year-olds. I love coaching the senior levels. I see myself, hopefully, being at a wide variety of levels in the future. Certainly I have aspirations to be successful at all of those.