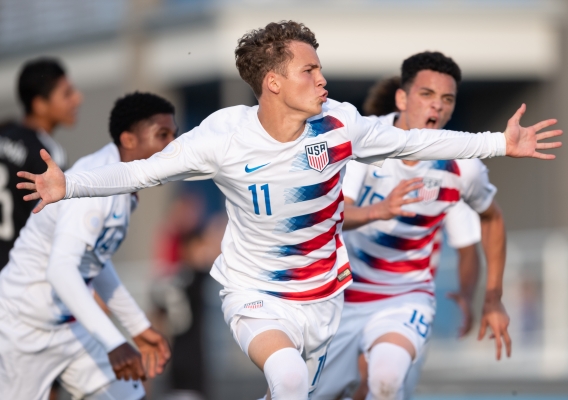 The adjustment from the youth to the professional ranks is often one of the most challenging moments in a player's career. Some players make it, but many fail. ASN's Justin Sousa spoke with U.S. U-17 and DC United attacker Griffin Yow about how he is progressing at this stage.
BY Justin Sousa Posted
July 02, 2019
9:30 AM
THE CAREER OF  a professional athlete not only takes a toll on the player physically, but the level of expectation and pressure that exists within modern sports places a tremendous strain on the individual emotionally and mentally as well.

Some of these athletes are prodigal phenoms yet to reach the age of 18 and completely unaware of just how detrimental these conditions can be in the long-run. For 16-year-old Griffin Yow, this is a problem he has found answers to within his religious practices and support from family and teammates.

“I think it’s always good to have religion there, with God on your side” Yow told ASN. “Having him to look up to is great, and I’ll always give credit for everything to him.”

Growing up in a relatively religious household, Yow had already been exposed to prayer by his parents and older brothers. However, it was not until the winger noticed some of the game’s biggest names incorporating their religious beliefs in celebrations or pregame and postgame routines that he began to do the same. Citing Lionel Messi as one of his inspirations for doing so, Yow has slowly begun to realize the impact religion can have on an athlete’s mindset.

“I’ve looked at some of the guys, some of the pros, who are very religious” Yow stated. “Messi, for example, always points to the sky after he scores, so I think that’s a huge part of the game now.” The teenager also went on to say that a handful of his teammates also played a part in beginning his own religious appreciation, especially those from Latin and Central America.

Yow has already signed a homegrown contract with D.C. United and played a handful of professional games with their USL affiliates Loudoun United. His four goals as a Loudoun United player, as well as the overall quality of his performances for the club, have rightfully garnered attention from United States Men’s National Team and D.C. United superfans.

Yet, the Virginia native refuses to allow the hyperbolic noise that is beginning to surround his young career interfere with his game. Though it can bring about pregame jitters, Yow turns to religion once again as a way of soothing his mind before every match.

“I’ll always [pray] before games because it makes me feel comfortable, it makes me feel better, and I feel like I’m ready for the game” Yow admitted. The D.C. United prodigy utilizes these pregame prayers as a way for him to not only give thanks to God but also his family.

Coming from a soccer family in which his mother and two older brothers played at the collegiate level, the Yow household was thrilled their youngest member would have the opportunity to prove himself with D.C. and Loudoun. The excitement, he reassured, came in moderation as his family look to keep him grounded as well as motivated to succeed throughout the early stages of his transition to the professional game.

“It’s always good to give thanks to them because they’re the ones who got me here” Yow said. “I’m always talking to them about everything I go through during training, during games, and off the field.”

The commitment from his parents to ensure he succeeds derives from the simplicity of driving him to practice every morning. Still without a license, Yow and his mother often wake up around 7 am and prepare themselves for the hour-long trek to RFK Field for training every morning. It is a minor commitment that has stemmed from his parents’ ability to provide the resources Yow needed to get to this point in his career and one he is always grateful his parents are willing to take on to help him reach his goal of becoming a professional soccer player.

Large chunks of his time now, though, are devoted to being on the road for matches or daily training sessions. With distance becoming an occasional obstacle between his relationship with his family, Yow has begun to build an extension of his family within his teammates. Wayne Rooney, the youngster admitted, is a player he often looks towards in times of frustration or confusion.

“If I’m feeling down, or if he notices I don’t like the way things are going, he’ll always go out of his way to say ‘Keep your head up’ or just lend some piece of advice” Yow said about the former England international and Manchester United star.

Initially star struck by the presence of one of his soccer idols in training, Yow now relishes the opportunity to call Rooney a teammate or mentor as well as a friend in the locker room. Having experienced the pressure of breaking onto the professional soccer scene at a young age himself, Rooney clearly expresses an affinity for providing Yow with a mentor-like persona given their warm-hearted interactions after games and in training.

To a lesser extent, Yow also finds these qualities within the likes of Paul Arriola and Chris Durkin as well. Both midfielders have already experienced some of the challenges that come with breaking into the professional game at a young age, with Arriola plying his trade at Tijuana prior to joining D.C. United and Durkin being a constant figure within the recent U.S. Youth National Teams.

“Paul’s one of my closest friends on the team” Yow began. “He’ll always look after me for the fact that he went through the youth national team, was away from home a lot, and then finally broke into the professional side, so we always just like to talk about how things are going. I think having him here as a friend is huge.” The two wide midfielders are consistently seen in pictures together across social media and parading the achievements of one another throughout their feed.

Yow also values the bond he has formed with his fellow D.C. United homegrown in Durkin, stating that the center midfielder has been a tremendous help to him finding his feet for both D.C. and the Under-17 U.S. Youth National Team. The biggest bit of help Yow says Durkin has provided him is to perform with consistency and to avoid sporadic periods of good and bad performances.

“Being able to have six good games in a row and being consistent in practice as well is what [Durkin] usually tells me,” Yow put concisely. On the surface, it is relatively straightforward advice, but it also serves as a reminder that showing quality game-in and game-out is more valuable than performing flashy skills on the wing or scoring a nice goal once every ten games

In an era where the USMNT is currently floundering to make up for a deprivation in talent at the senior level, any sign of quality from young prospects will attract immediate attention in their direction. While it shows the fans are backing their young stars to make a breakthrough at the senior level, that type of hype can quickly cause the anxiety and stress of juggling pressure and expectation as a professional even more difficult.


Who else but @griffin_yow to put the US up 1-0 on Portugal in the 35th minute, capitalizing on 2 errors and bagging his 3rd USYNT goal in 4 caps! pic.twitter.com/Ig3NUeaNUp

“There is a level of hype and expectation but being humble and level-headed is definitely key” Yow said. Though he believes in consistency, Yow is in complete disagreement with the concept that a player should be expected to never have an off-day on the field.

“You shouldn’t go into every game thinking you have to perform or play to the best of your ability” he added. “It’s also about playing calm and having fun like you’re back home with your siblings or friends. That, I think, is the best way to do it.”


Local @griffin_yow collected a goal and 3 assists in the U17 @USYNT’s 8-0 win over Guadeloupe on Thursday!

That approach, across most of his appearances for Loudoun United, is exactly what he seems to transcend into his style of play. Yow is finding himself, both on and off the field, through the various mechanisms he has in place to ensure the pressure of expectation does not harm the fun, explosive approach he has to every match.

Whether it be the security he finds in prayer or the comfort he finds in the presence of family, friends, and mentors, Yow is well equipped to continue moving in a positive direction with his development and career.