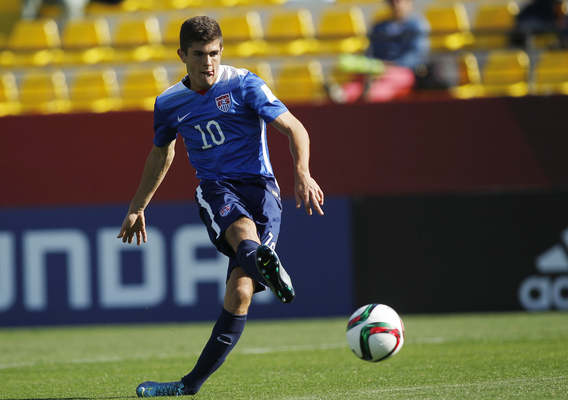 The Good, The Bad, and The Ugly for U-17s at World Cup

The United States Under-17 team has a single point after two matches at the World Cup. Can they get things together, earn a victory against home side Chile, and advance to the knockout round?
BY Brian Sciaretta Posted
October 22, 2015
11:15 AM

Following a second half-meltdown in Tuesday’s 2-2 draw against Croatia, the United States U-17 team is very lucky it still has a chance to advance at the World Cup. With the Americans up 2-0 at halftime, a win seemed all but in their grasp; by the time the final whistle had blown—moments after two late Croatian shots had hit the woodwork—they were highly fortunate to avoid a loss.

Unlike in the opening game against Nigeria, the Americans opened up on Tuesday, aiming for a more attacking brand of soccer. While Croatia may have been marginally better in the build-up of its attack, the U.S. team put its impact players in positions to make a difference.

Here are some of my thoughts on the team through its first two games.

Pulsic is living up to the lofty hype

Regardless of what happens at the rest of this tournament, Borussia Dortmund's Christian Pulisic has proven that he is one of the best American players at this age group in a long time—perhaps, in fact, the best American U-17 player since Landon Donovan himself.

Whether or not Pulisic’s professional career pans out remains to be seen, of course, but the signs are certainly promising. His passing and his runs are extremely effective and he can keep the U.S. team in games almost single-handedly. As a pure No. 10, Pulisic attacks and defends, frequently winning the ball back from the opponent. He’s been fun to watch.

Williams needs to do better

The second half of the Croatian game was alarming. Yes, Croatia made a few key adjustments, but those paled in comparison to the unacceptable mentality the U.S. team brought to the second 45 minutes. The Americans crumbled, while Croatia dominated, to the tune of an 18-1 shot disparity after halftime. The United States was weak, scared, and lacked all confidence.

It was not, in short, reflective of players who should know each other well by now after playing the past two years together.

Croatian Coach Dario Basic was as surprised as anyone else. "If you offered the draw at halftime, I would have taken it," Basic said. "But after how we played the second half, we deserved the victory. In the first time we defended poorly and they scored two goals out of three shoots, but we had our chances. Then we asked for the heart of our players, and they responded with personality and also with talent. Either you believe or not in luck, today it was not on our side."

But while Basic preached inspiration and heart, his counterpart was left lamenting a loss of composure.

"I can't explained what happened in the second half," U.S. Coach Richie Williams said. "In the first we scored twice and had some other chances, but above all we were able to keep control of the ball. I don't think my players were over-confident at 2-0, but they lost their composure. You can't defend a whole match against a team as good as that and who put that much pressure on you like Croatia.

"At the end, not everything is bad: We have one point, and we can still advance."

But there are explanations. It was obvious, for instance, that Josh Perez and Alex Zendejas were being tasked with playing far more defensively than they were in the first half. The coach has some very good attacking players, so he could've kept up the pressure and tried to take Croatia out of the game for good. Instead, he attempted to play out the entire second half with the same approach one would expect from a coach hanging on in a game’s final minutes.

How should the team line up against Chile?

The good news for the U.S. team is that Chile is beatable, and a win would clinch a spot in the knockout stages. A draw might be enough if the uber-talented Nigeria beats Croatia by more than two goals.

Chile's 5-1 defeat to Nigeria exposed a number of weaknesses, but the team still will have a spirited home crowd. The pressure is on the Americans to earn a result in a hostile environment. Can the squad raise its game and play on its own terms, or will it simply react to what Chile does?

Williams sent out a far superior lineup against Croatia than what he deployed for the opener against Nigeria. It almost appeared as if the U.S. team was saving its best team for the second two games.

Danny Barbir and Luca de la Torre need to start again after each had sat out the Nigeria loss. Pulisic and de la Torre can match up very well in the midfield against most teams in this tournament. Barbir, meanwhile, was a huge improvement in central defense over Auston Trusty. One other change that is possible would be moving Tyler Adams from right back into the more fitting defensive midfield role, and then putting Matthew Olosunde into the right back role.

Overall, though, lineup changes are small in comparison to having the team play with the right mentality. Williams needs to ask for heart, and give the players a chance to show off their personality and talent.

If they do, they will advance—and be a threat. If they don’t, they will be—deservedly—heading back home.