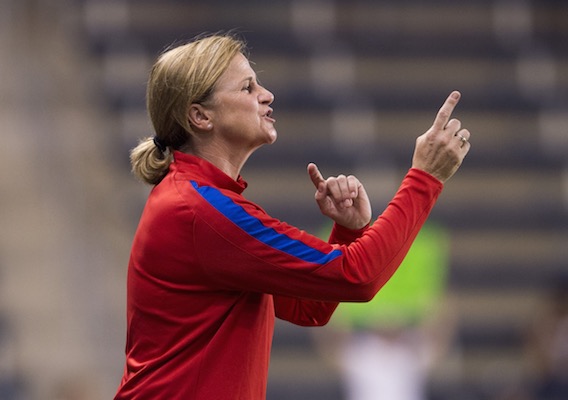 American Soccer Now's John D. Halloran examines the tactical shifts that have led the U.S. women's national team to a remarkable 14-0-1 record in 2016, raising expectations for the club in Rio.
BY John D. Halloran Posted
July 26, 2016
11:00 AM

AFTER SECURING A 4-0 VICTORY over Costa Rica in its final send-off match on Friday night, the United States women’s national team now turns its attention toward the 2016 Rio Olympics.

The American squad heading to Brazil is markedly different from the one that competed in Canada for the 2015 World Cup last June. Over the past year, the roster has undergone a significant makeover, the form of the team is much more consistent, and head coach Jill Ellis has implemented a number of important tactical changes.

A vocal proponent of proactive, attacking soccer, Ellis sought to make the U.S. side a more tactically nuanced team right after being hired in April 2014. However, many of those early efforts—including an attempt to move the squad to a 4-3-3—didn’t pan out. The coach couldn’t find the right combination of central midfielders to make the system work and within a few months she reverted to the more familiar 4-4-2 that predecessors Pia Sundhage and Tom Sermanni had favored.

Under Ellis, the team did win the 2015 Algarve Cup in March but the U.S. offense—utilizing a 4-4-2 setup—still sputtered far too often and relied too heavily on a long-ball style that no longer worked with any consistency. Some players on the squad complained publicly, as did former U.S. stalwart Michelle Akers. The team lost its No. 1 ranking for the first time in seven years, and even the coaches of Iceland and Ireland criticized the Americans’ aesthetically unpleasing style of play.

So when the Americans headed to Canada last summer for the 2015 World Cup, many didn’t consider the U.S. the favorites. Many pundits regularly questioned Ellis’ tactics, and even her abilities as a coach. The Americans’ play in the group stage did little to quell anyone’s doubts.

Then, in the quarterfinals, a yellow-card suspension forced Morgan Brian into the Starting XI and a shift to the team’s formation. Out went the 4-4-2 and in came the more progressive 4-2-3-1. The move opened up the U.S. offense and the Americans went on to win the tournament.

Since then Ellis has continued this evolution, leading the U.S. to a 14-0-1 record in 2016 and rebuilding the roster with a decidedly more youthful look. She has also continued to play with three central midfielders and a lone central forward flanked by two wide players.

Many observers would classify the system as the same 4-2-3-1 that the U.S. used in the World Cup, but Ellis prefers to call the system a 4-3-3 and also recognizes that the formation morphs during different phases of play.

When the U.S. is defending, the team’s No. 6 and No. 8 (Allie Long and Lindsey Horan, respectively, in the Americans’ last two games), play parallel and provide cover for center backs Becky Sauerbrunn and Julie Johnston.

However, when the U.S. has possession, Horan—a converted forward—bombs up the field to join the attack. Joined by left back Meghan Klingenberg, who has an insatiable desire to burst down the touchline into the attacking third, the U.S. quickly creates overloads on the left flank. Opposing defenses are forced to try and mark Horan coming forward out of the midfield and Klingenberg overlapping out of the back—a nearly impossible task.

Meghan Klingenberg and Lindsey Horan pushing into the attacking third

Speaking to American Soccer Now, Horan explained her role prior to the game against Costa Rica. “We like to give more of an attacking role to our No. 8,” she said. “You try to get in those spaces to find the ball higher up the field and have Allie control the defensive space.”

This attacking strategy, however, does leave the U.S. somewhat vulnerable to counterattacks. Long is left as the lone cover for the Americans’ backline, and usually off-center toward the right side of the field. With Horan and Klingenberg off hunting for goals, Sauerbrunn has no one in front of her, or to her left.

Sauerbrunn, one of the most tactically sophisticated center backs in the world, is uniquely qualified to handle such a situation, but the U.S.’ attacking shape still leaves her on an island. When the Americans lose possession the team often has a significant gap on its left flank which top teams could exploit by overloading that side of the field.

However, speaking after the match against Costa Rica, Ellis explained that this risk is part and parcel of trying to play a more proactive style. She also noted that the U.S. has strategies in place to prevent such counterattacks.

“If you want to play aggressive, attacking soccer, at times you’re going to get exposed,” said Ellis. “The confidence I have in our backline to be able to deal with situations where there are breakdowns and [opponents] solve [our] pressure, I think we’ve done that very well. We talk defensively about counter-measures, meaning, when we’re attacking, ‘Is Becky pressed into that player, do we have cover, do we have numbers?’

“Our weak side outside back will slide [in that situation]. We have a shape in there that allows us to get the most out of them. Two of our outside backs are two of our best attacking players, I wouldn’t want to rein them in. Defensively, we defend out of two blocks of four and two—attacking, we play out of a 4-3-3. Now, we’re at the point as a team where we’re pretty seemless in how we flow in and out of that which is a big step we’ve taken.”

Sauerbrunn, for her part, acknowledged how difficult her role can be at times, but also argued the team knows how to handle these situations.

“It’s definitely tough, especially because we’re giving [Meghan and Lindsey] a lot of freedom to go forward,” said the defender. “We have to make sure that Julie’s tucked in, that Julie’s bringing Kelley and she’s tucked in, or whoever’s on that side. We’re always trying to keep a triangle back, so whether it’s Allie Long that stays tucked in, or Julie and I, we always try to—in case it should happen that we lose the ball—be protected on the counterattack.”

Sauerbrunn stepping into the midfield to pressure, Johnston providing cover, O’Hara tucking in for balance

When the U.S. suits up in Brazil, most expect Brian to start in the No. 6 role in place of Long. Ellis praised Long’s effort against Costa Rica, especially in the absence of Brian, who has battled a hamstring injury of late. The coach also said that she may continue to use Long as the team’s No. 6 and instead slot Brian into the No. 8 role.

“In [Brian’s] absence, we’ve been able to cultivate Allie Long and I thought she had another good performance tonight. That gives us some depth in there, some options,” said Ellis. “Having Allie also allows us to play [Brian] in the No. 8. Between the two of them, we’ve got some depth.”

Carli Lloyd, who most often lines up above the other two center midfielders as the No. 10, looked at the tactical question from a less nuanced perspective.

“The coaching staff is obviously putting some things into play—game plans—and we’ve got to follow those and execute.”

The first match of Olympic play for the U.S. is against New Zealand on August 3.