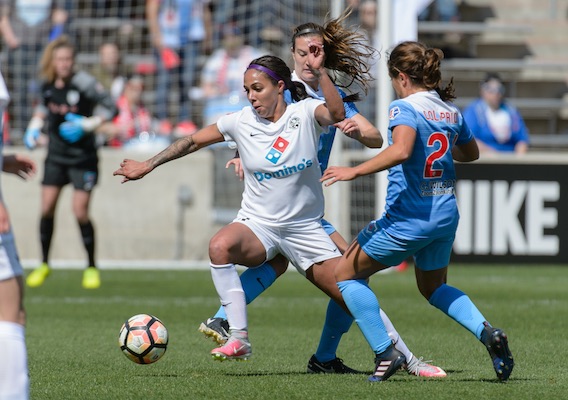 Sydney Leroux Returns to Action, and to Scoresheet

The FC Kansas City forward and U.S. women's national team veteran discussed the emotions she experienced in returning to the game post-childbirth, and the satisfaction of scoring her first goal in years.
BY John D. Halloran Posted
April 24, 2017
8:35 AM

WHEN SYDNEY LEROUX stepped onto the pitch last weekend against the Boston Breakers, it had been 656 days since her last competitive minutes on a soccer field, a stretch dating all the way back to the 2015 World Cup semifinal against Japan.

Following the tournament that year, Leroux underwent surgery for an ankle injury and then, while working her way back to full fitness, announced in January 2016 that she and her husband, Sporting Kansas City forward Dom Dwyer, were expecting a child.

Despite the nearly two-year layoff, Leroux, 26, didn't take long to get back into the swing of things last Sunday, scoring only six minutes into play and leading FC Kansas City to a 2-0 win in its opening game.

"It was definitely a weight off my shoulders," said Leroux, speaking to the media this weekend in Chicago. "You wonder, if you haven't played in a long time, if you're still capable of scoring goals, so it felt really good just to get that out of the way in the first game."

Two days before the game against Boston, she took to social media to share the doubts she dealt with during her long break from the game.

It will be 656 days since I've played in a soccer game. That's 656 days of wondering, can I? Will I? What if? That is a HELL of a lot of wondering. The days were long and hard and brutal and beautiful all at once. To say I'm excited to get back on the field is an understatement. I am so thankful for the people who have stayed in my corner and made me believe that I can and I will. I hope to see some of you on Sunday! - Syd The Kid (who is no longer a kid anymore and is getting old af)

To get past her own uncertainties, Leroux instead focused on her motivations.

"Once I had a baby, I said, 'I'm going to do this for him, and for my family, and for myself.' I think it's important to show other women that they can do it," she explained.

"I have teammates that have done it. If they can do it, I know I can. I can push myself, but it is the hardest thing you can ever do, to come back after [a pregnancy]. I think that it shows women that we're capable."

Last week, Leroux was joined in her return to the scoresheet by fellow U.S. international Amy Rodriguez, who was also returning from a pregnancy, her second.

However, Rodriguez' return proved to be bittersweet, as she suffered an ACL tear in the contest, only seven minutes after notching a goal herself.

Leroux said the loss of Rodriguez has been difficult.

"For me, it was very hard. I know how hard she's worked. I know what it feels like to come back from one [child], never mind two. She's Superwoman. For that to happen, it was just heartbreaking."

The UCLA alumna also explained that managing the work-life balance of being a professional athlete is harder than people might expect, especially because her husband is in the same profession.

"It's funny because my husband does the exact same thing that I do, so you would think that you can find a balance, but you can't because I'm either home and he's playing away or he's playing at home and [I'm] away," admitted Leroux.

"This weekend we're both away. It's tough, but I feel like as parents you do the best you can and make it work and that's what we're doing right now."

The forward is also looking forward to a return to international play. While Leroux conceded that she's still probably a month away from being ready to compete again for the U.S. national team, she thinks a return to the team for the June friendlies against Sweden and Norway is a realistic target.

"I still have a little ways to go, but I feel like every single day I'm getting a little closer."