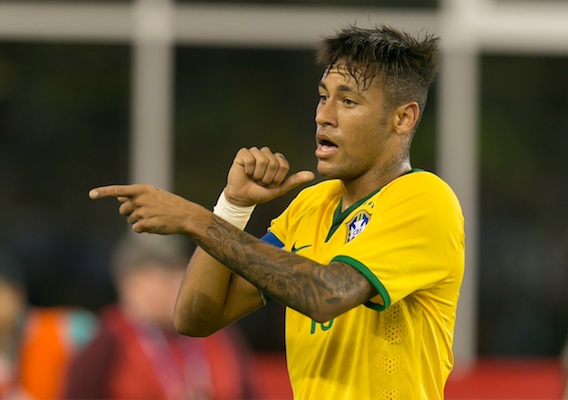 THIS PAST FRIDAY, in what has unfortunately been an increasingly common phenomenon in the world of soccer, there were more highlights off the field than on it. The biggest news: The Swiss Attorney General’s Office formally announced that longtime FIFA president Sepp Blatter was under criminal investigation for his part in the FIFA corruption scandal. Prosecutors subjected Blatter to several hours of interrogation while conducting a search of his offices at the organization’s headquarters in Zurich.

Meanwhile, half a world away in Sao Paulo, a federal judge froze nearly $50 million of FC Barcelona star Neymar’s assets, declaring that Neymar had allegedly evaded as much as $16 million in taxes between 2011 and 2013 in connection with his 2013 transfer from the Brazilian club Santos to FC Barcelona. The allegations are similar to those levied against Lionel Messi in Spain, where a court recently ruled that there was sufficient evidence to permit the criminal prosecution of Messi and his father for tax fraud schemes designed to evade as much as $5.5 million in taxes. Fellow Barcelona star Javier Mascherano was also charged on Monday for avoiding taxes in Spain.

So what do these events have in common? Profit-shifting.

Blatter didn’t deliver a suitcase full of cash to Trinidad and Tobago to secure former CONCACAF and FIFA official Jack Warner’s vote (although there may yet be evidence of that). Instead, Blatter reportedly delivered a contract that assigned the region’s TV rights to the 2010 and 2014 World Cup to the Warner-controlled Caribbean Football Union for a paltry $600,000. Warner then turned around and licensed those rights to media companies for approximately $20 million. Effectively, by undercharging Warner for the rights, Blatter shifted the profits from FIFA to Warner’s organization, a deal that Swiss prosecutors suggest may constitute “criminal mismanagement” because it appears to favor Warner at the expense of the organization to which Blatter owes his utmost duty of loyalty.

Similarly, Neymar didn’t simply fail to file his tax returns or fail to declare all of the income paid to him personally. Instead, he and Barcelona allegedly constructed the payout for his move in such a way that some portion of the money may have been shifted to companies controlled by Neymar or his family, including a Brazilian company controlled by Neymar’s father, so that they would not appear to go to Neymar himself. Moreover, the payments were reportedly structured so that they were for something other than Neymar’s services, possibly to further disguise their true nature. That may explain why the club acknowledged that a payout that was initially reported to be $65 million was actually worth as much as $114 million.

Messi’s tax evasion charges are even more clearly about profit shifting. According to the complaint filed in 2013, Messi’s father Jorge used a number of shell companies to shift royalty and licensing income from Spain to tax haven jurisdictions such as Belize and Uruguay. Because of withholding obligations, which don’t apply to payments within the European Union, the payments were funneled through a number of other countries, including the U.K. and Switzerland, before eventually arriving at their tax-preferred destination. Mascherano is being charged with a similar scheme to shift the profits from his image rights, which allegedly involved funneling the profits through companies located in Portugal and the United States. Rather than engaging in the maneuvers to shift profits to other individuals and entities, the schemes were allegedly designed to shift the profits to more tax-favorable jurisdictions.

So what does any of this have to do with Google (and Apple, and Microsoft, and Facebook, and countless other companies)? These profit-shifting transactions have in recent years become the bread and butter of multinational corporations, primarily to avoid high-tax jurisdictions, but sometimes to hide profits from investors or disguise illicit payments.

The simplest method of shifting profits is through a mechanism known as “transfer pricing.” In a transaction, one party sells something to another party for a price that is arguably below the market price for that item so as to artificially depress the seller’s profits, or, conversely, for a price that is arguably above the market price for the item so as to artificially inflate the buyer’s expenses (and thereby depress its future profits).

In most cases involving multinational corporations, the two parties are located in different countries but are both controlled by a common parent corporation. This enables the parent to shift the profits from one jurisdiction (usually a high-tax country) to another jurisdiction (usually a low-tax jurisdiction). The transferor may suffer a loss or a reduction in income, while the transferee enjoys a gain on the subsequent resale, but all of this is just an accounting shell game since the parent is no better or worse after the transaction as a pre-tax economic matter.

Blatter’s low-ball deal to assign the Carribean World Cup TV rights to Warner is an example of a transfer pricing deal. Instead of doing it as a mere accounting trick, though, his goal presumably was to disguise a bribe or payoff as a legitimate business transaction.

There are a number of more complicated profit-shifting transactions that have been used in the past decade or so, including the colorfully named “Double Irish” or “Dutch Sandwich” transactions that led to the creation of the Organization of Economic Co-operation and Development’s (OECD) Base Erosion and Profit-Shifting project and to crackdowns in both Ireland and the U.K.

This type of profit-shifting arrangement, which is primarily used to shift profits from intellectual property rights because they flow freely across national boundaries, is likely similar to what is being employed by Messi, Mascherano, and possibly Neymar according to tax authorities. The goal is to feint left and move right, leaving the tax authorities in their home jurisdictions holding the bag.

As soccer and its players have become increasingly global and profitable, it is little surprise to learn that the major players, both on and off the field, are using the same playbook as multinational corporations. Soccer reformers may need to be more versed in the laws of international commerce than the laws of the game to catch-up.