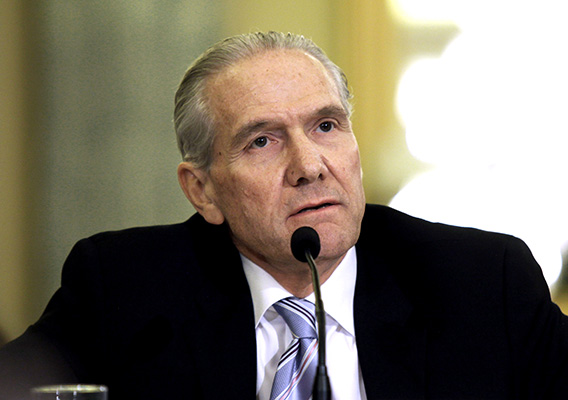 ASN contributor and UCLA Law professor Steven Bank assessed Wednesday’s hearing from a legal point of view and discusses why he believes Sunil Gulati was well advised to stay away.
BY Steven Bank Posted
July 16, 2015
9:50 AM

THE SENATE COMMERCE subcommittee hearings on “Examining the Governance and Integrity of International Soccer” were more colorful, longer, and better reported than most governmental hearings. (Investigative reporter Andrew Jennings may want to take his show on the road after this.) But did the hearings mean anything?

Here are a few thoughts:

1. These hearings are typically theatrical

Most hearings do not lead to legislation or even much in the way of new information to educate politicians about an issue that might come before them in the future. Rather, they are little more than grand theater. They are called because someone on the committee or subcommittee wants to appear to be out in front on an issue.

The Senate hearings had elements of many of these aspects of a typical hearing. For instance, there were a number of popular issues, including the gender pay disparity and the human rights abuses in Qatar, that politicians on both sides of the aisle could safely take a stand against without actually doing the hard work of grappling with a solution.

The timing of these Senate hearings also suggests that they were designed to maximize publicity.  The recently concluded Women’s World Cup Final was the most watched U.S. soccer game in history, the CONCACAF Gold Cup is currently being held in cities throughout the country, and the FIFA indictments were front page news throughout the country the last two months. So the senators likely expected that the hearings would garner publicity and the overflow of media coverage proved them right.

In fact, the length of the hearings and the questions from multiple Senators (when many hearings are dominated by the one politician who actually wanted the hearing) were probably a function of the full media table. Think of it as the beltway version of a ticker tape parade for the U.S. women’s national soccer team.

Notwithstanding the grand theater quality of the hearings, is there anything Congress could do, besides holding more hearings and calling for more investigative reports, if they actually wanted to bring down FIFA?

On the one hand, the Justice Department has already demonstrated the power of the U.S. government to shake up FIFA and CONCACAF. On the other, one myth about FIFA corruption is that CONCACAF is the epicenter of corruption in global soccer because a large number of the indicted officials came from the region.

The fact is that it was targeted for the same reason that people look for their lost keys under the lamppost. CONCACAF is based in Miami and its former general secretary, Chuck Blazer, was the linchpin for the investigation. So U.S. officials had jurisdiction and a cooperating witness who knew the most about corruption in this part of the world.

Of course, this still led to some indictments of FIFA leaders not from the region and that may lead to other indictments, but the U.S. likely does not have the jurisdiction or information to go after the football federations in places like Africa and Asia where corruption is also surely present.

Nevertheless, the U.S. certainly has the market power to bring down FIFA if it wanted to do so.  After all, if the U.S. really wanted to go after FIFA, it could classify FIFA as a criminal organization and make it illegal for any U.S. companies or individuals to do business with it.  Starved of the money that comes from the U.S. market, it is likely that FIFA would either crumble or its member associations would capitulate and force real reforms.

3. Gulati was likely advised to stay away

The most notable absence from the list of those testifying before the subcommittee was the head of U.S. Soccer, Sunil Gulati. Despite being invited to appear, he declined in the absence of a subpoena, which would not have been likely in this type of hearing.

Many commentators lamented his absence, especially while watching Dan Flynn, U.S. Soccer Federation CEO and Secretary-General, squirm while answering pointed questions from the senators. Nevertheless, Gulati chose not to appear on the advice of counsel. And that advice was sound.

Moreover, the nature of the indictment and Gulati’s position in FIFA makes it possible that he will be ensnared even if he did not directly commit any illegal act. If the Justice Department were able to establish that FIFA was a RICO conspiracy, all members of the FIFA executive committee could potentially be liable as co-conspirators under the theory that they agreed to pursue what was classified as a criminal endeavor.

This is true regardless of whether they individually took any action that would be considered criminal or even whether they knew about all of the criminal acts ultimately undertaken.