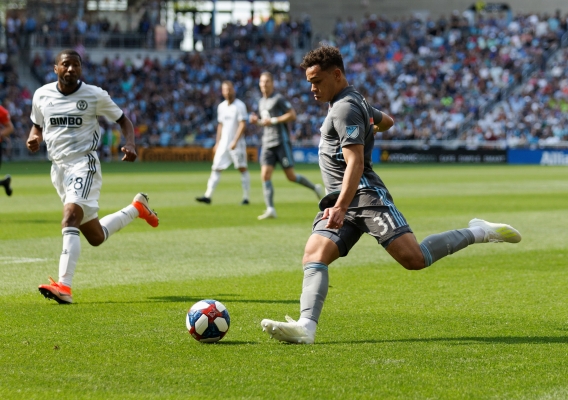 Second round draft pick Dotson emerging as a ROY & U.S. U-23 candidate

Minnesota United's Hassani Dotson has been one of the most surprising young American players in MLS this season. Now the likely Rookie of the Year candidate might find himself on the U.S. U-23 team sooner than later.
BY Brian Sciaretta Posted
August 21, 2019
6:00 AM
WITHOUT QUESTION, the 2019 season has been a success for Minnesota United on many different fronts. For one, it moved into its fantastic new stadium in Allianz Field. Even more importantly, the team has improved dramatically on the field and now sits in second place in the Wester Conference while also set to play in the U.S. Open Cup final.

There are many reasons for this improvement but the addition of designated players like Darwin Quintero and proven veterans like Ike Opara have been key. Also important has been the steady development of younger players who have progressed nicely this season under manager Adrian Heath.

Hassani Dotson, 22, is one of the most surprising and positive stories for Minnesota United. A second round draft-pick out of Oregon State, Dotson has grown into an important role for Minnesota where his versatility has been key – playing right back, left back, and central midfield over 16 appearances. Over the past month, he’s role on the team has only grown.


It took me 37' to remember that Ozzie Alonso isn't starting and Hassani Dotson is. The #MNUFC rookie has been that effective alongside Ján Greguš.

He really should get a look for #USMNT Olympic qualification. #MINvORL

“I think I've exceeded my expectations but with each challenge comes more and I want to just keep getting better each day,” Dotson told ASN in Minnesota. “For me, the goal was to just get drafted, then work hard and hopefully sign. Ever since then, all the coaching staff, the players, the training staff - they have all been supportive of us young guys. So I think it was an easier transition than I thought. It's been going well but it's a lot more difficult physically and mentally than the college game. The mood around the team is very positive. The goal is to make the playoffs and then anything can happen.”

In a sense, Dotson is a throwback to an earlier era of American soccer where college soccer and the draft were more relevant. The modern era relies mostly on signing academy players to professional contracts as teenagers via the homegrown role.


Hassani Dotson having one heck of a rookie season. Another impressive goal pic.twitter.com/Z9NUihCg8L

Dotson understands the current landscape but still believes that college is the appropriate path for some who are not ready to turn pro at a younger age but who still might mature later at a high level.

“Obviously it is good to be in a professional setting as soon as possible but at the same time, you're going through a lot more things and you're still trying to mature,” Dotson explained. “I would compare the high level college programs similar to USL but it's more forgiving. You're still given time to learn and try new things. Whereas if you sign earlier at 18, yes you are young but there is a lot more expected of you early on. Some people can handle the pressure, some people can't. My little brother is pretty good and that is what I've been talking to him about - either direction is fine but you just have to work hard at whatever direction you take.”

“For me, I obviously wanted to get drafted in the first round but I obviously knew that I wasn't at a big name college going into the combine,” he added. “So not a lot of people knew about me. Also, I understood that most of the first round is based on need for a position. I was a little sad about being in the second round, but it doesn't mean you are guaranteed a contract based on round.”

Dotson has earned a lot of accolades for his season so far and is even getting mentioned as a strong candidate for the Rookie of the Year.

“The kid just got a feel for the game,” Minnesota manager Adrian Heath said. “No matter where you play him, he gets a feel for the game. You can’t give that to people. They’ve either got it, or they haven’t and he’s got a feel for the game….He’s a really good finisher. Maybe one of the best finishers in training that we have. I want him to have a go because he’s a very clean, positive striker on the ball… And I think he’ll be one of them guys who could probably play like he’s done [in our game vs. Philadelphia], and in three or four different spots as well.”


@MattDoyle76 making the case for Hassani Dotson as Rookie of the Year frontrunner.https://t.co/wBabgrdzUU

A lot of this talk stems around his consistency for a good team but also the quality of the goals he has scored this year – all three have been impressive and were scored from outside the box. He is quick to downplay the talk about rookie of the year but insists he has always been confident striking the ball from distance.

“I had a couple of really nice goals in college as well,” Dotson said. “But I am pretty excited. If you told me before the year that I was going to score three goals, I would have taken them even if they all came after my hand. I am pretty confident in the way I strike the ball and when it goes in, it is always a great feeling… I am more of a consistent player. Those types of awards [like Rookie of the Year] don't normally come my way. I know many of the guys in the combine well. If I don't win, at least I know it is going to another good guy.”


Not a bad way to score you first professional goal, Hassani Dotson. pic.twitter.com/mTjQQPD3EO


A native of Seattle, Dotson played soccer from an early age but his interest in the game was fostered by the 2006 World Cup which turned him into a massive supporter of Chelsea. He recalls waking up with his father at 4am to watch European games on the old Fox Soccer Channel. He also frequently attended Seattle Sounders games before it came into MLS. Then when it came into the league and had players such as Ozzie Alonso and Freddy Montero, it pushed him even further.

Dotson has had a big year so far but there is a chance that it could move to a higher level soon. In addition to the upcoming playoffs with Minnesota, the U.S. U-23 team is going to continue its preparations soon for Olympic qualifying and by virtue of his season, Dotson seems as if he would be a likely candidate.

One of the factors that helps him is his versatility and the Olympics is limited to just an 18-player roster. That would make his versatility ideal for Jason Kreis’ team. While central midfield is his preferred position, Dotson has proven to be an effective fullback – which would allow him to provide a lot of cover on a small roster.

The talk of an international call-up is not one that Dotson wants to think about too much about but when pressed, he can’t hide his excitement.

“I would get butterflies, I am smiling just thinking about,” Dotson said about a U-20 call-up. “I'd love to play for the U-23 team. I know a bunch guys who are much younger than me who are playing very well. It's always been a dream of me to play for the national team - regardless of age - because I've never even been invited to a camp before.”