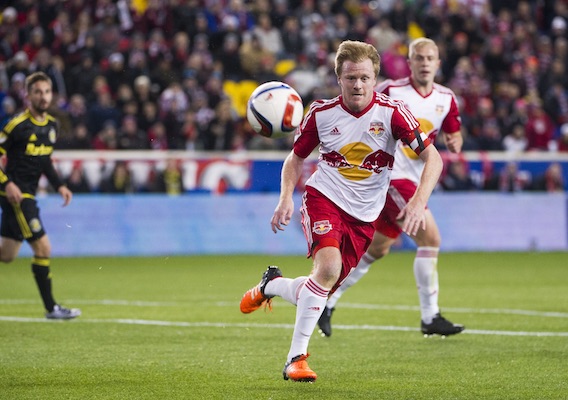 Red Bulls Find Hope Despite Another Year Without Cup

HARRISON, N.J.—When the New York Red Bulls walked off the field Sunday night after falling to the Columbus Crew, 2-1, on aggregate, disappointment was in the air: After a season in which the club claimed the Supporters’ Shield for the second time in three years, it would now enter a third decade of MLS Cup futility.

When the franchise debuted as the MetroStars in 1996, many were hoping it would grab hold of the New York market and be one of the league’s most visible—and viable—teams. Only recently, however, has that actually become the case. The fan base is loyal, the crowds are lively, and the team found a way to win (and win a lot) this season despite firing favorite son Mike Petke and losing iconic striker Thierry Henry.

That said, the Red Bulls came up short again in the playoffs when it had maybe the best team in its history. Having led the league in scoring in the regular season, the Red Bulls scored just once over 180 minutes in its series against Columbus.

So was this just the latest setback for a snake-bit organization, or was this the first step toward building a perennial MLS contender?

“Clearly, Columbus used the experience from last year to benefit them this year,” head coach Jesse Marsch said, referencing the Crew’s first-round loss to the Revolution. “We are in the middle of our own process. I think we were a good enough team this year to have a real legitimate shot to win MLS Cup, and I think we proved that throughout the season and throughout the playoffs.

“The reality is that we are in the first year of our process. We're very hopeful to keep this group together as much as possible and continue the process next year. We want everything that we went through this year to make us stronger for next year. It's hard to talk about that right now. Talking about next year is not something we want to do.

"Right now, we want to thank them all for this year.”

But keeping that group together will likely prove a challenge. Midfielder Mike Grella exceeded all expectations on a one-year deal after contemplating retirement last winter. Central defender Matt Miazga has one more year left on his contract, but with his growing international pedigree he will almost certainly be receiving offers from foreign clubs. Damien Perrinelle’s injury will carry over into the beginning of next season, too, leaving defensive depth an issue.

“This team will never be together as it exists now, and it's hard to know that, because I love this team,” Marsch said. “I've asked these guys, at such a high level, to think about the team first. Now when the offseason comes, it's time for the players to now think about their own personal situations. So you know, there's a lot of delicate situations with different players, and we have to figure out how to keep the nucleus of this team together, retool it, and then get ready to give these guys a little bit of break and then get ready to ramp it all up again for next year.”

Captain Dax McCarty, who has been with the team from the Hans Backe era to the Petke era to Marsch’s, is certainly aware of how quickly things change in this league. While there have been questions about McCarty's future, on Monday Red Bulls Sporting Director Ali Curtis announced the team would exercise its option on McCarty's contract for 2016.

“I think it's important,” McCarty said of keeping the team together. “We proved that we're a good team in MLS and had success. Winning the Supporters’ Shield certainly says something, but the way that we play and the system that we play definitely took a little time to get used to. This is MLS. Things change all the time. This locker room is going to be different next year.”

The good news for the Red Bulls is that a number of teams in the weaker Eastern Conference face more pressing questions, perhaps cross-river rivals NYCFC more than anyone. The balance of power will remain in the Western Conference, where most of the high-spending teams will remain, but the telling question will be how much the Red Bulls organization is willing to spend to keep up with them.

With the departures of Henry and Tim Cahill, New York shed a ton of payroll. Until the midseason acquisitions of Gonzalo Veron and Shaun Wright-Phillips, in fact, New York had the smallest payroll in MLS.

The fact that the Red Bulls nonetheless continued to win will probably lead to higher salary demands; the only way New York can avoid a big budget increase is with stellar production from young homegrown players, draft picks, or more underutilized “diamonds in the rough” like Grella who can punch above their weight. Relying entirely on that type of system, though, is risky and uncertain.

“I think there's a new direction,” Marsch said of the team’s approach. "Our goal is to put ourselves in these kinds of games and situations every year, to grow every year, to invest in our youth and youth academy, and create something that has such a big identity that everyone in the community wants to attach themselves to it. The first year, in that sense, has been an overwhelming success. If we can make this kind of progress year in and year out, we'll create something that I think can be really special.”

Indeed, there should be plenty of opportunities next year for the Red Bulls to shine. Regardless of what happens in the offseason, New York is a good bet to be back in the playoffs next season; no players of Henry’s caliber will need to be replaced. Marsch will return, and his decision to play his best players in the U.S. Open Cup should as well. The CONCACAF Champions League, by the way, is just around the corner.

So yes, disappointment was certainly in the air on Sunday. But there was a healthy dose of optimism too.

“It's difficult to assess right now because there are a lot of emotions,” goalkeeper Luis Robles said. "Last year, we're really one goal away from getting to the final, and we don't have any silverware, and this year we're one goal from the final and we got silverware, so I feel like we're heading in the right direction.”