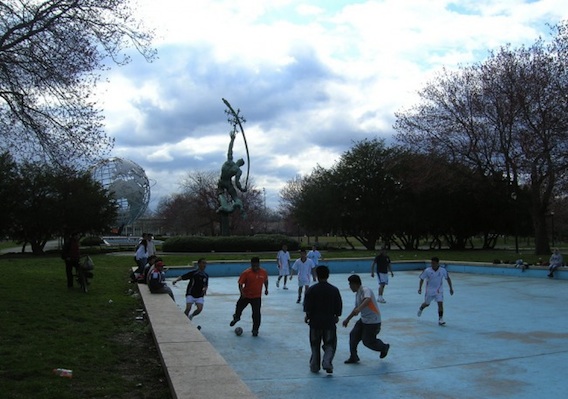 Is Flushing Meadows Park in Queens a downtrodden patch of real estate that is desperate for MLS investment, or is it pristine patch of land that should be left alone? Ben Jata explored the park, and the topic.
BY Ben Jata Posted
August 07, 2014
1:19 PM
IT'S NO SECRET: New York City FC and Major League Soccer wanted to build a stadium in Flushing Meadows Park in Queens, but for a variety of reasons the plans fell through. Former New York City mayor Michael Bloomberg was all in, saying he felt the site would be "a wonderful place" for a stadium." But certain community activists argued that "a stadium in Flushing Meadows Park would severely damage what remains the crown jewel of Queens." Is the area a dilapidated eyesore that could benefit from a soccer stadium and the infrastructure that would come with it? Or is it a pristine, historic region that needs to be left alone? I’ve lived in Queens the past two years and I've been to Flushing Meadows Park a few times, but after reading all these comments I wanted to see for myself: Would FMP and the people who use it benefit from an overhaul, or should it be left as is? Determined to assess the site for myself, I rode my bike from my apartment in Woodside/Jackson Heights over to the park to get some perspective as to why this once heavily sought after stadium location for Major League Soccer's 20th team, NYCFC, wasn’t approved. REDUCED FROM its actual size of 1,200-plus acres when accounting for roads and other excluded areas within the park’s perimeter, FMP is the fourth-largest park in New York City at 897 acres (No. 5 in the image below), 54 acres larger than iconic—and beautifully maintained—Central Park in midtown Manhattan. FMP houses multiple well-known landmarks, including the Billie Jean King National Tennis Center and Citi Field.

The park was created from a former dumping ground and was eventually cleared to make room for the 1939-1940 World's Fair. Long story short: the park has gone to shit. It does not look like the image above anymore. Leftover buildings and monuments from the 1964 World's Fair have decayed over time and are now nothing more than gargantuan eyesores that can be seen from miles away, occupying some of the largest unused—and most expensive—real estate in the New York area. Other than the two professional sports stadiums, three-to-four newer turf fields, and a renovated Queens theater, Flushing Meadows Park is nothing more than dirt, trees, asphalt, and some of the most neglected soccer fields you've ever seen in your life. The saddest thing about this park isn't the extreme lack of care. It's the fact that throughout most of the year, the park is visited by thousands of residents on a day-to-day basis—people looking to enjoy some quality outdoor activity with family and friends. The fact that they have to play soccer in conditions like the ones shown in the pictures below is both degrading and disgraceful to the city of New York. A stadium/partnership with NYCFC and MLS could turn this park from a run-down dump into one of the most desirable attractions in the city. A venture of this sort would create jobs, roughly 2,000 during construction and 1,100 permanent, according to NY State Senator Jose Peralta. It would likely help revitalize the area and generate revenue, as local owners often see business climb 30 percent when the Mets play. Most of all, it would give nearby residents something to be proud of—something that is actually worth visiting and enjoying.

The numbered fields above surround a large water-filled object known as the Pool of Industry. Originally created for the 1964 World's Fair, it once housed a fountain that shot 10,000 tons of water as high as 150 feet in the air. Today the 25,000 square foot object offers nothing more than a home for a few fish and couple geese every now and then. It's an incredible amount of wasted space. Field No. 5, below, is one of the nicer fields in the park...

The space below, located between fields 5 and 6, was being put to use by locals.

BELIEVE IT OR NOT this wasn't even the worst of it. I went on to explore every nook and cranny I could of the dumping ground turned World’s Fair site turned poorly managed state park. And everywhere I went people were playing soccer. They were playing in areas where trees and bushes acted as central defenders and defensive midfielders. There were using goals made out of trash cans and construction markers. They were playing on hills and in the street. At one point I saw six grown men playing volleyball with a soccer ball on a makeshift net, one end attached to a lamppost and the other to a metal rod sticking up from the ground, as they killed some time waiting for a soccer "field" to free up. It was a mind-blowing experience. The amount of jerseys I've never seen before in my life was astounding. The balls varied in size and most of them were beat up. Some people were playing in jeans and tennis shoes. Others were decked out in soccer gear from head-to-toe. Mothers and children were manning the goals. Everyone was involved. As night fell I found myself outisde a place called Terrace on the Park. Built originally as a heliport for the 1964 World's Fair by the Port Authority of New York and New Jersey, the building is now being used for private banquets, weddings, and proms.

The building was in somewhat decent condition overall. The entrance was welcoming. There was soft music playing in the background. The windows and gold accents didn't have a smudge on them. From far away it looked like another deserted building, but close up it was rather refreshing. Odd, but somewhat refreshing. After that I cruised through one final area of the park, a parking lot located no more than 50 feet away. Newborns, children, teenagers, young men and women, mothers and fathers of Hispanic descent flooded the lot for one common reason. You guessed it, soccer. Located throughout the lot were five makeshift soccer courts. I can't really say "soccer fields" because there was no grass. It was again one of the worst playing conditions I've ever seen used in a competitive environment. The goals consisted of PVC pipes stuck together (no nets). The balls were beat up and flat. Men, women, and children often played in the same game. They were dodging puddles, running under trees, and hopping through medians. But they were having fun. More than two million residents call Queens home. It's the most ethnically diverse county in the nation. If soccer is in fact the most popular sport in Queens, which it is, you'd think the City of New York Department of Parks & Recreation would want to put more time and money into improving the area for its residents. Does that mean allowing Major League Soccer to build there, with the renovations and improvements to existing fields that would go along with it? Does it mean simply improving the quality and upkeep of the rundown fields currently there? Hard to say. For now, however, Flushing Meadows Park is nothing more than a glorified wasteland with a few amenities scattered here and there. Ben Jata is an American Soccer Now contributor and an Anaylst at Opta Sports. Share your thoughts on this article below and follow him on Twitter.