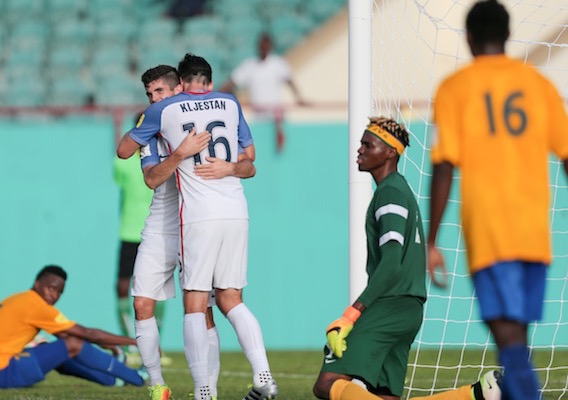 The Borussia Dortmund teenager and the New York Red Bulls playmaker didn't get into the game until the 66th minute but they combined beautifully and helped the Yanks lock up the win.
BY Brian Sciaretta Posted
September 02, 2016
3:55 PM

THE UNITED STATES men's national team coasted to an easy 6-0 road win over St. Vincent and the Grenadines in World Cup qualifying. The two biggest standouts by far were Sacha Kljestan and Christian Pulisic who both came on in the 66th minute and turned the game into a rout.

The win, of course, is to be taken with a grain of salt given the amateur level of the opponent. The primary objective of this game was to put it away early and avoid injuries. In that regard, it was mission accomplished. On an individual level, no one really hurt their status although some players played better than others.

The win put the U.S. team essentially in the 2017 Hexagonal. On Tuesday, the U.S. will advance with a win or draw against Trinidad & Tobago along with a loss as long as it does not cough up a 12-goal differential advantage.

Brad Guzan: A brief moment of uncertainty lead to a dangerous chance for St. Vincent and the Grenadines but otherwise there really wasn't much for him to do. Rating: 5

DeAndre Yedlin: The right back used his speed well both offensively and defensively although he he wasn't all that dangerous in the end. His yellow card will have him suspended for the group stage finale. Rating: 5.5

Geoff Cameron: The Stoke City veteran was a solid presence on the backline and cleaned up whatever St. Vincent had to offer—which wasn't much. Rating: 6

Matt Besler: In what was an emotional day, Besler celebrated the birth of his daughter in the morning and scored the team's second goal in the first half when he bounced on a botched clearance. Defensively he did his job. Rating: 7

Kellyn Acosta: Playing out of position at left back, Acosta managed to be active. His final ball was lacking a bit but he seemed to have a good read on the game. Defensively he held his ground. Rating: 5.5

Graham Zusi: He was beaten a few times but offensively his passing helped the U.S. find its way through St. Vincent's overrun defense. Rating: 6.5

Kyle Beckerman: While solid at the last World Cup, age has taken its toll for Beckerman in recent years whenever the U.S. team has to go against top-tier competition. Against most of CONCACAF, however, he is still a steady and reliable hand. This was the case tonight as his passing was accurate and his was a disruptive force in the middle. Rating: 6.5

Alejandro Bedoya: The new Philadelphia Union midfielder was not as involved offensively in a central role but his usual high-level work rate was apparent as he tracked back defensively in the heat. Rating: 5.5

Fabian Johnson: In a rarity for the U.S. men's national team, Johnson had the opportunity to start in his normal midfield role. He assisted on Bobby Wood's opening goal but was not as active as he could have been. The heat seemed to take its toll. Rating: 6

Jozy Altidore: After missing the Copa America with an injury, Altidore wore the captain's armband in his return and scored from the spot shortly before halftime. While that was his only goal on the day he was active in the attack and in hold-up play. Rating: 6.5

Bobby Wood: The Hawiian set the tone early with a nice goal to put the U.S. on the board. Later in the half he made a very nice run into the box where he was fould to earn a penalty—converted by Altidore. In the second half he slowed down but he was instrumental in the first half. Rating: 6.5

Christian Pulisic: The 17-year-old was a game changer after coming on in the 66th minute. He scored two goals and registered an assist. He was dynamic, energetic, and fun to watch. Rating: 8

Sacha Kljestan: Like Pulisic, he came into the game in the 66th minute and helped put the game out of reach with two assists and a goal. His movement and read of the game was very good and he combined very well with Pulisic. Rating: 8

Jordan Morris: The Seattle rookie came into the game in the 72nd minute but did not have much of an impact as the U.S. coasted. Rating: 5.5

Jurgen Klinsmann: Unlike some other road games against minnows, Klinsmann's team was prepared and put the game out of reach early. Against a weak opponent, there is not really that much a coach can learn about his team. Instead, he got the best possible outcome—a stress-free three points and zero injuries. Rating: 6.5