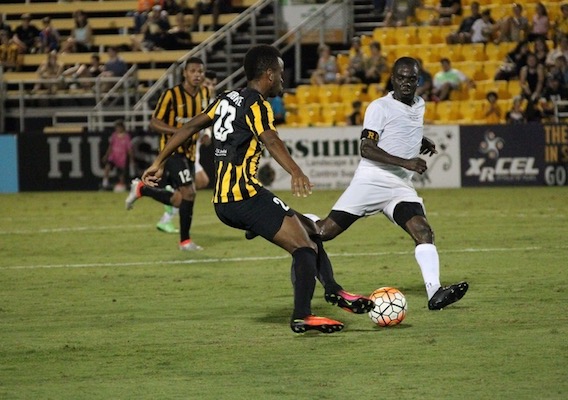 On Friday the 19-year-old forward scored three times for the United States under-20 national team in a 5-3 loss to the Netherlands in the Four Nations Tournament in Manchester, England. The former Duke University striker was the leading scorer at the NTC tournament in June. All told, he has tallied eight times and registered three assists this calendar year, making him the top threat on Tab Ramos' team.

The U.S. U-20 team is not short of talent: Gedion Zalelem, Cameron Carter-Vickers, Weston McKennie, Luca de la Torre, and perhaps even Christian Pulisic are part of the player pool. But Ebobisse could be critical to the team’s success as the starting central forward with the responsibility of finishing off scoring chances.

The Four Nations tournament is the biggest test the team will face so far in the cycle, with the Yanks playing against some of the world’s most powerful programs. Despite dropping the opener to Germany on Wednesday 1-0 and the second against the Netherlands, Ebobisse is bullish on the team’s chances.

“The confidence level of the team is really high dating back to the first camp we had of 2016 in Florida,” Ebobisse told American Soccer Now. “We incorporated a lot of new faces and sort of weeded out others as well. We started to build our chemistry and identity there. The NTC sort of capped off what was an upward trend in performances and confidence. It's not always going to be pretty, it's not always going to be easy. But if we can face adversity early in the cycle, we can get used to it and prevail. We're heading in the right direction.

“We have the talent to go very far,” he added. “It's a question of our mentality and can we play a full 90 minute game? But given the upward trend of our youth teams, we are ready to step up to the plate and take that standard to a higher level.”

The Four Nations tournament is the first time Ramos has had this many of his core group together. Carter-Vickers and Zelalem both played up an age group for the 2015 World Cup, which advanced to the quarterfinals before bowing out to champions Serbia in a shootout. The pair, who play with Tottenham and Arsenal, respectively, bring experience and leadership to the U-20 side.

Not with the team is Christian Pulsic who might never play with this team due to his involvement with Borussia Dortmund’s first team as well as the full U.S. national team. Still Ebobisse and others are hoping Pulisic does find his way into the squad at some point.

“For Carter-Vickers and Gedion to bring their World Cup experience in 2015, they'll be able to show us the ropes,” Ebobisse said. “I know a lot of us are just getting involved for the first times with the U-20s. They're doing very well for their clubs and playing against some of the best players in the world at their age. They know what's expected and they've dealt with the situations which we are now facing. With their leadership, we have the team to make waves in the World Cup.

"If we can even add Christian Pulisic, on a personal note as a forward, that is music to my ears to get that kind of service.”

Aside from the U-20 team, Ebobisse is at an important stage in his career. After receiving the blessing from his coaches, he left Duke University in January to take the semester off and go on trials with clubs in Europe as well as explore options domestically.

His first major trial was at Hoffenheim and while he believes he played well, there was disagreement as the reserve team technical director and coach wanted to keep him but the first-team coach, according to Ebobisse, wanted to promote existing academy players. In the end, he did not sign for the club.

After his performances at the NTC with the U-20 team, Ebobisse went on trial with Frecnch side Le Havre, at the time helmed by former U.S. national team coach Bob Bradley. Ebobisse again believed he played well but the club had recently signed three other forwards and with Bradley playing a 4-5-1 formation, there was little room for him. Bob Bradley, however, did advise Ebobisse that he was better than most of forwards in his position but that he needed to be playing first-team football against men to develop heading into the U-20 World Cup. Finally, Ebobisse trialed at Sonderjyske in Denmark but that trial was brief and Ebobisse was not interested.

In the end, MLS was pursuing Ebobisse all along and the interest was mutual despite the European trials. Over the summer, Ebobisse signed with the league and was loaned to the Charleston Battery of the USL for the rest of the season. He will be available in the 2016 draft. Eventually he would like to sign in Europe but only if it is for a top European league.

Right now, he wants to succeed in MLS and hopes it takes him directly to a top league as it did for players like Clint Dempsey, Stuart Holden, Carlos Bocanegra, and Brian McBride. Part of his eagerness in joining MLS next year is due to the success that other young forwards have had recently.

“The Danish team was not in my plans at all and La Havre would have made me think,” Ebobisse said.

While Ebobisse arrived late in the season for Charleston, one of the better teams in the USL, he has gained from the experience insisting that playing meaningful minutes is an improvement over simply training with an MLS team for the remainder of the year.

Charleston coach Mike Anhaeuser is also optimistic on Ebobisse’s chances next year both in MLS and with the U-20s.

“Working with Jeremy has been very rewarding,” Anhaeuser said. “Jeremy has many qualities in a young striker that can make him a top-notch forward. He has a huge upside as he already has the physical ability to handle the game, and his touch and ability to hold the ball and bring in other players around him is very good. Lastly, and most important, Jeremy has shown the ability to score goals. He has done it in training and also in the game versus Montreal when he showed his ability with a left-footed goal bending to the far corner after beating his defender in the box.

"I think Jeremy is equipped very well for the U-20 World Cup. If he keeps growing and working in training and games he should be a big asset to an MLS team in the future and hopefully the U.S. U-20 team.”

With the numbers Ebobisse is putting up for the U-20 team, he is setting himself up to have an even bigger 2017 where he could feature at the U-20 World Cup and be among the top overall draft picks—maybe even with Atlanta, which is currently affiliated with the Charleston Battery.

No matter which team lands him, Ebobisse has established himself as a U.S. prospect.

“I have a really good opportunity in MLS to follow in the footsteps of Cyle Larin and Jordan Morris,” he said. “They have shown young forwards can succeed in MLS.”