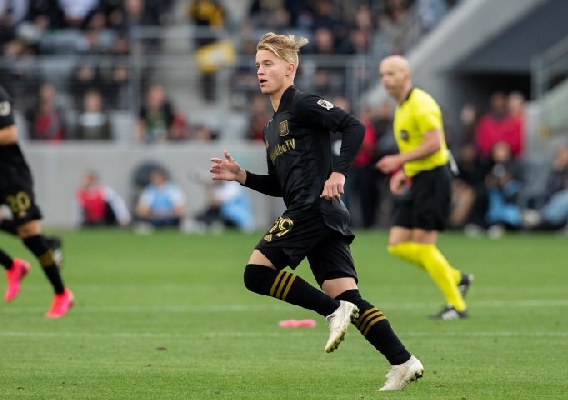 Once play resumes, Duke aiming for LAFC and U.S. U-20 breakthrough

WHENEVER THE MLS season resumes, LAFC will once again be expected to be one of the league's contenders. On a roster loaded with veteran stars, Bryce Duke is a U.S. youth international who is trying to make inroads with team. ASN's Jake Castillo spoke with the Arizona native about his ambitions with LAFC, the U.S. U-20 team, and more.
BY Jake Castillo Posted
May 27, 2020
6:10 AM

FEW PLAYERS’ LIVES have changed as drastically as Arizona native, Bryce Duke’s has over the past five months. In January, he signed his first professional contract with LAFC, arguably the biggest and perhaps, best team in Major League Soccer. In February, he made his professional debut against one of Mexico’s most storied teams, Club Leon, and in March, he was called into the United States U-20 national team camp (which, unfortunately, ended up getting canceled due to the nationwide shutdown).

The performances Duke has put on since signing with LAFC are a far cry from those during his first soccer season at three years old:

“When I was three, I hated soccer," Duke recalled of his first steps in the game as a young child. "I always wanted the ball, so when one of my teammates had it, I would either go and try to steal it from them, or I would sit down in the middle of the field and start pouting.”

Clearly Duke’s distaste for the sport did not last long. However, his desire to get on the ball and make things happen is still there. So, it should come as no surprise that Bryce has established himself as one of the most technically gifted and creative midfielders in the ‘01 player pool. Feeling equally comfortable playing as a number 8 as he does as a number 10, Duke is willing to slot in wherever his team needs him. However, he does concede that the number 10 role is probably the spot on the pitch where he is at his best. It was in this role where Bryce spent most of his time while at the Barça Residency Academy in Casa Grande, Arizona.

Duke joined the prestigious residency program in 2019, after spending two years at the Real Salt Lake academy. The impetus for this move came from all of the opportunities Barca could offer Duke. It was here, in the Barca system, where Duke truly began to flourish as a player. “The first thing they told me when I got there was that they knew what type of player I was, and that they wanted me to just have fun and enjoy myself. They encouraged me to play the way I wanted to play.” Which is exactly what Duke did, and unsurprisingly, his play quickly began to draw interest from professional clubs.

While obviously thrilled with these potential opportunities, this interest forced Bryce to make some very hard decisions. In the Duke household, education is paramount, so forgoing a college education was never going to be an easy choice for Bryce. However, after a conference call between, LAFC General Manager, John Thorington, Bryce, and his parents, it became clear that Bryce was ready to push himself to the next level.

“When they offered me the contract, I was super excited. After a long talk with my family, I made my decision about 45 minutes before training at Barca. After practice, I thanked the coaches for everything they had done for me and told them that I had decided to sign my first professional contract. They all couldn’t have been happier for me. The next night my mom picked me up in Casa Grande, we went to the nearest UPS store, printed out the contract, signed it, faxed it over, and that was it. I was part of the squad.”

Fortunately, his teammates (Jordan Harvey and Mark Anthony Kaye, in particular) have helped him navigate these challenges by sharing tips and tricks of the trade. Perhaps the most interesting piece of advice he’s received, however, came from 2019’s MLS MVP, Carlos Vela. During pre-season, Vela took Duke to the side and told him to “Relax. Don’t waste all of your energy. Pick your times. Pick your moments. Make it easier for you. You don’t always need to run into open space. Sometimes you just need to take a few steps to the right and you’ll be in an even better space.”

It is apparent that Bryce has taken this advice to heart and proven to be a quick learner, as he established himself as a regular contributor off the bench for LAFC before the COVID-19 shutdown. His first appearance came on the biggest stage possible, in Guanajuato, Mexico, against Club Leon during the first round of the CONCACAF Champions League.

“It was insane. The atmosphere was ridiculous. They got their chants. Everyone is jumping around. Smoke bombs. Everything. It was intimidating sitting on the bench, but once I stepped on the field, everything kind of disappeared. It was just a game of soccer. I just tried to have fun.”

Getting minutes in big games like this is just the first of many goals Duke has for the season. Assuming play can resume at some point this year, Duke wants to “get as many minutes as I possibly can, break into the starting line-up, goals, assists, and then, as a team, winning a championship.”

Given LAFC’s star-powered roster, achieving these goals will surely be difficult…but that’s just the way Duke wants it. “I didn’t come to LAFC to have anything handed to me. It’s all going to come with time and hard work and just proving to everyone that I deserve minutes.”

Duke’s ambitions do not end with MLS accolades though. He also hopes to continue to receive call ups to the US U-20 team and ultimately earn himself a spot on the team’s roster for the FIFA U20 World Cup.

However, given the nationwide shutdown and the uncertainty surrounding the future of sports for the rest of the year, Duke is just trying to “go with the flow.”

thankful for the opportunity, time to get to work???????? pic.twitter.com/aBGlzTbphD

This should not be confused with taking it easy though. Even when Duke is relaxing, he is improving himself; Be it by reading financial literacy books or reaching out and picking the brain of fellow youth national team player, Richie Ledezma.

But that’s just who Bryce is. “I try to take all of the information people give me and put it into my game to make myself a better player.”  Given the state of the world right now, Bryce does not know if, or when, MLS action will return, but one thing is for sure, and that is, that when it does, he will be ready.