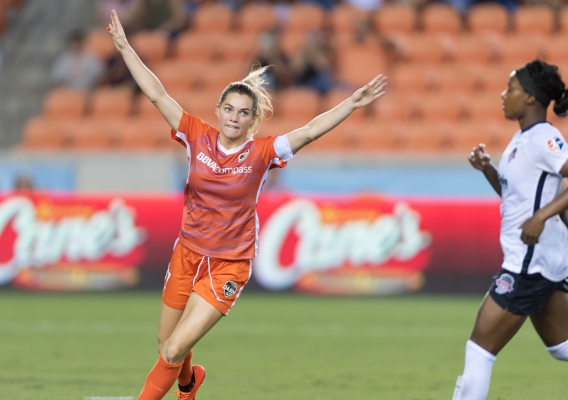 “My goal this year is to be the leading scorer in the league,” Ohai told American Soccer Now. “I want to get back with the national team, but I can’t control that, or who they pick. What I can control is scoring goals and [getting] assists. That’s my focus. As a forward, I have to produce. That’s [my] No. 1 job.”

Ohai’s second goal—and one she calls her “personal mission”—is to lead the Dash to their first playoff appearance in franchise history.

“It’s frustrating to me that we haven’t made the playoffs yet,” she said. “I take responsibility for that in some ways because I’ve been here the whole time. That’s something that this year is our No. 1 focus. We have to improve there. There’s just no other excuse.”

Over her five years in Houston, Ohai has seen highs and lows with the club. As the first expansion team in league history—and, at the time, only the second to enter with a Major League Soccer connection—many had high expectations from the start.

Coming out of the gate, Houston hired an elite college coach and made Ohai—who had won a world title with the U.S. U-20’s and a national title with the University of North Carolina—the No. 2 pick in the 2014 NWSL draft. But over the years, and even with several high-profile internationals at the club, the Dash never seemed to figure things out. In five seasons, they’ve gone through four head coaches and never finished higher than fifth in the league standings.

Ohai calls her experience with so many coaches “a roller-coaster,” but thinks this is the year things finally change. In the off-season, the team brought in James Clarkson, who came in from the Dynamo side of the organization.

“It’s obviously difficult to continuously be changing staff and trying to figure out different tactics and the way they coach and personalities,” she explained. “It has been hard. That’s something though that I’m really happy with James. I just think it kind of fits finally.”

“James is from the club, the Dynamo side, but he’s from Houston,” she added. “He knows our training facilities, he knows the organization, so it’s not like we’re getting some new person who is new to Houston, who has no idea. It’s just so much easier that he’s already been here, he knows the way things work. That has made the transition a lot easier I think.”

Ohai says that practices this preseason under Clarkson have been “awesome” and that the players are “loving” his coaching style. And in addition to the energy coming from their new manager, the Dash should also benefit this season from an immense amount of talent available during the summer months when most teams will be losing their key players to the World Cup.

“I think that our non-internationals [are] some of the best in the league,” Ohai explained. “[On] a lot of teams, the range is bigger. They have a lot of really great players, but a lot of them will be gone at the World Cup.

“We have some pretty incredible girls that are not on national teams and I think that’s what’s going to help us so much this year.”

In addition to Ohai, Houston should have several Americans with international experience available this summer, including Amber Brooks, Kristie Mewis, Sofia Huerta, Jane Campbell, Haley Hanson, and Christine Nairn—all of whom have earned caps with the senior U.S. team, but are unlikely to make the World Cup squad. During the tournament, Ohai says the Dash need to “get as many points as we possibly can.”

The forward is also coming into this season fully healthy. After finishing tied for the league lead in goals in 2016—and then setting a U.S. record for the fastest goal ever scored in an international debut that fall—Ohai tore her ACL midway through 2017. Her recovery lasted into 2018 when she missed the first few games and was still working her way into form throughout the year.

But this spring, the Utah native says her knee “feels awesome” and she’s ready to lead the team to bigger and better things.

Even with the injury and long recovery, Ohai is the only player to see action for Houston in all five of their seasons and enters 2019 approaching 100 appearances for the club. Over that span, she’s seen the club grow quite a bit.

“It’s been pretty wild to see from the beginning,” she explained. “Obviously, at that time, the league was new and we were doing our best, but working through so many challenges. Just from a standpoint of the club, the organization—it has improved so much.”

“The Dash have improved as an organization and really tried to make the players’ experience as best as they possibly can,” she added. “Just from little things. I remember my rookie year pretty much every girl lived [with] a host family, every girl was trying to figure out cars and getting to practice and logistics and all that’s gone. Everyone is in apartments, everyone has cars, and just from that standpoint, I think we have improved so much.