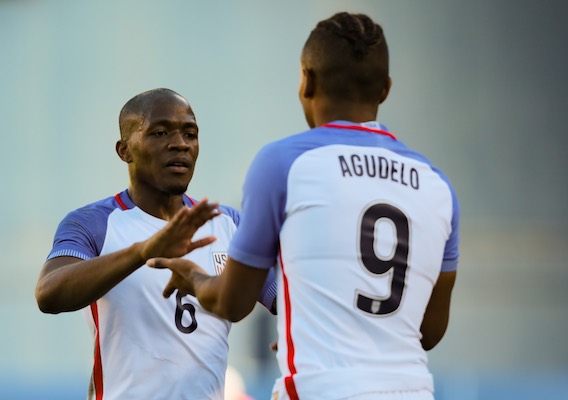 Nagbe and Substitutes Shine in Draw with Serbia

Portland Timbers attacker Darlington Nagbe outperformed his fellow starters on Sunday, and a handful of subs stood up and made their presence felt in Bruce Arena's first 2017 match as U.S. head coach.
BY Brian Sciaretta Posted
January 29, 2017
1:55 PM

BRUCE ARENA'S second go-around as head coach of the United States men's national team began with a lackluster scoreless draw over a subpar Serbian team. It was somewhat of a disappointing way to start 2017 but the good news is that some players, many of them substitutes, looked ready for more minutes.

The real winner of the game, however, was Darlington Nagbe. He was involved with just about every dangerous chance and looked to be a real keeper on the team moving forward.

Most players ended up with mediocre ratings but a few stood out—both good and bad. Here's how I saw it.

Nick Rimando: It’s not easy having virtually nothing to do and then make a big save late in the game to preserve a scoreless draw. Rimando did that and it was to his credit. He was a bit uneasy with a few of his crosses but overall was not asked to do much. Rating: 6

Graham Zusi: The Zusi experiment at right back was mixed. He was not beaten defensively although he was not tested all that much. His best offensive moment came minutes into the second half when he took a pass from Sebastian Lletget and fed Sacha Kljestan for a dangerous chance. Other than that, it wasn’t bad but it was not great. Rating: 5.5

Steve Birnbaum: The D.C. United central defender had a similar outing to his central defense partner, Chad Marshall. Both were solid defensively in the air although distribution was mixed when the U.S. tried to go to a high line. Rating: 6

Chad Marshall: The Seattle Sounders mainstay was good in the air but a little slow sometimes with his challenges. He made a nice stop in the box in the 25th but gave up a clumsy foul just minutes later. Rating: 5.5

Greg Garza: Pace was an issue for Garza right off the bat as he struggled to push into the attack and was beaten occasionally. The new Atlanta United left back was lucky to not give up a penalty in the 22nd minute. His substitute, Jorge Villafana, had a better game. Rating: 4

Michael Bradley: The captain was asked to play a deep-lying midfield position and sit in front of the central defense. It was a different task than he has been accustomed to with the U.S. and overall it was a decent if not unspectacular outing. The U.S. controlled most of the possession and Bradley did do a good job trying to change the point of attack. On the few times he did get advanced in the attack, he did not add much. Rating: 5.5

Jermaine Jones: The new Los Angeles Galaxy midfielder showed a nice engine playing the first half. He covered a lot of ground although aside from his outstanding pass to spring Nagbe in the 39th minute, he did not leave much of a mark on the game. Rating: 5.5

Alejandro Bedoya: The Philadelphia Union midfielder was mostly invisible for very long stretches. Normally a tireless worker, he should have been able to take the game to the opponent far more than he did. Rating: 4.5

Sacha Kljestan: The New York Red Bull captain had some nice moments in the game although could have been better. Early in the second half he sprung Altidore into the box with a nice ball in which Altidore was too slow. Minutes later he had a nice combination with Nagbe on the right side. Still, there was long periods of invisibility too. Rating: 6

Darlington Nagbe: After a messy 2016 under Klinsmann, Nagbe was the best U.S. player on the field Sunday. He could have finished a few chances but still he was involved in just about every dangerous opportunity. He’s a very skillful player and one of the few American starters who saw his stock rise today. Rating: 7

Jozy Altidore: It was a memorable game for Altidore only because it was his 100th cap. Otherwise, he did little to help the Yanks. He was not nearly as dangerous as he could or should have been. Yes, he was not set up for success as much as he should have been because the single-striker formation has never been his friend. Still, his runs and movement were far from where they should be. Rating: 4

Sebastian Lletget: Replaced Jones at the half. Looked sharp early in the No. 8 role, winning balls and helping with the team’s possession. While mostly good, he had a bad giveaway at the end that resulted in Serbia’s best counterattack of the game. Fortunately for Lletget, Rimando saved him from being the goat. Rating: 6

Chris Pontius: It took him a while to get into the flow in his international debut but he created one dangerous chance late in the game for Agudelo. Pontius also missed a shot just wide at the end which would have won the game. Rating: 6

Jorge Villafana: Making his international debut at left back, Villafana showed some nice signs of life when the U.S. was weak at the fullback positions. He was able to push forward more than Garza was and definitely earned another look. Rating: 6

Jordan Morris: The Sounders rookie came on for Altidore in the 74th minute but probably should have come on far sooner. In what was a slow United States team, Morris was one of the few players on the roster who could be a threat in the open field. The U.S. had the better of the chances the final 15 minutes and Morris helped open up the game. Rating: 6.5

Benny Feilhaber: The Sporting Kansas City playmaker only played the final 13 minutes but he definitely looked like a player who had a chip on his shoulder. He was energetic and lively. Rating: 6

Juan Agudelo: Like many of the substitutes, he was an improvement to the game. He should have had a winner at the end but took one touch too many and squandered his chance. Rating: 5.5

Bruce Arena: It's tough and sometimes unfair to grade coaches in friendlies given that they should be offered the opportunity to experiment. The real result for a coach in a friendly is what he learns, not whether or not he wins. Still, this was not a typical friendly given Arena’s familiarity with the player pool and the crucial qualifiers around the bend. In this game, there were some puzzling decisions from Arena—most notably the lack of speed in the starting lineup and the decision to go with Altidore in a lone-striker formation.

That being said, many of the substitutes in the game showed much better than the starters and there were some clear lessons to be learned. It certainly wasn’t a great game but if Arena learned how to best use his player pool the rest of the Hexagonal, his real grade will be much higher. Rating: 5

That's what Brian thinks—now it's your turn. Go create your own U.S. player ratings and share them on Twitter.