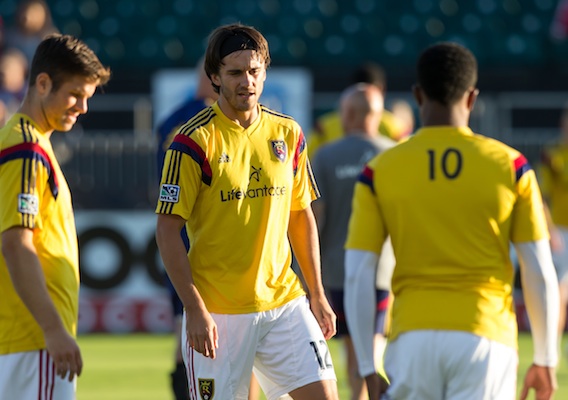 A role player during his four years in Major League Soccer, Cole Grossman is now a key contributor for Bob Bradley's Stabaek squad—which is off to a strong start in the Norwegian top flight.
BY Brian Sciaretta Posted
May 26, 2015
9:35 AM

TWO DAYS AFTER HIS FINAL 2014 match with Real Salt Lake, an out-of-contract Cole Grossman flew to Norway to try out for Bob Bradley and Stabaek. The two Americans had never met but Grossman, 26, made a strong impression and was offered a contract.

So far, so good. Although the Norwegian season is still young, Stabaek is in second place and the central midfielder has played a key role with the club.

“Bob is a really demanding coach and that is something I have enjoyed,” the St. Louis native told American Soccer Now from Oslo. “He is tough on guys. I’ve always responded best to that. It’s hard sometimes for everyone, particularly in the preseason, to be coached really hard. But he has an incredible ability to manage the team on the macro level with tactics, team shape, and formation.

But he also really, really coaches each position—which is so unique. He’s coaching right backs on certain kinds of things and he’s coaching our No. 10 on different kind of things. For me personally, he’s taught me so much both in the big picture and the small picture in just a few months.”

To say Stabaek has surpassed expectations would be an understatement. The club’s recent history includes financial problems which saw it get relegated, lose most of its players, get evicted from its new domed stadium, and return to its run-down old stadium.

Following promotion in 2013, the club hired Bradley to bring the club back to its winning ways. Despite having a very young and inexperienced roster, Bradley helped the club avoid relegation in 2014 and led the team to the the Norwegian Cup semifinal. This year there was heavy player turnover yet again but just before the start of the season Bradley brought in a trio of quality attacking players.

Stabaek currently has six wins, a draw, and a loss in its last eight matches. The club went on a remarkable 589-minute scoreless streak earlier this season which helped propel it into second place. Stabaek earned a road draw with defending champions Molde last weekend and lost to perennial power Rosenborg on Monday—a thrilling 3-2 affair.

Grossman has started every one of Stabaek’s games and only failed to go a full 90 once. He, like many around the club, are pleasantly surprised with the strong start.

“Expectations from the media here weren’t very high,” Grossman explained. “We were picked to finish pretty low after we lost a lot of players and there was a lot of turnover but we brought in players maybe the media didn’t really know about. We’ve just thinking about getting better and focusing on our season in short periods of time.

"I think the first couple of wins were a surprise but the last few have not been. For me, at least, I’m confident. First, we have a lot of really good players. Second, Bob is just a top, top coach. The combination makes for a good team. That’s been the backbone of our success.”

Grossman was never much of an impact player in MLS and in fact struggled to lock down a starting role during his four seasons in the league. After a four-year career at Duke University, the Columbus Crew selected him with the 28th overall pick in 2011 draft. After two seasons in Columbus, where he made 12 MLS appearances, Grossman moved to Real Salt Lake and made 21 appearances  before not being offered a new contract last fall.

So far this season at Stabaek, he has played 885 minutes and within weeks he will likely surpass the 1,219 minutes he played in MLS over four seasons. His two goals this season, including a stunning 89th-minute winner over Viking on April 19, already matches the two he scored in MLS.

Grossman believes having a clearly defined role and understandable tactics has helped him find success in Norway.

OK, but which league is better?

“It's something that I’ve thought about a ton,” Grossman said. “You’re always comparing the leagues, the styles, and the levels of play. I would say first, that the DP kind of player doesn’t exist in this league. You don’t have Dempsey, Keane, Kaka—those kind of players aren’t playing in Norway. Just on that alone, MLS is a better league.

"But there are actually parts of the Norwegian league that are better than MLS. Tactically, this league is superior to MLS. I realized early on that the American game is behind tactically.

“These teams are more organized and better tactically than the average MLS team,” he continued. “I’ve learned a lot about the game and about different kind of things within the game—formation and style. But there are similarities too. Norway is a physical league with athleticism similar to MLS.”

Grossman is optimistic about his club's prospects but is careful not to get overconfident.

"If we keep improving at the rate we have, I think we can win the title," he said. "There is such a long way to go, we’re trying not think like that right now.”

And while he would like to see how far he can take his game within the European environment, Grossman acknowledges that he may return to Major League Soccer someday.

"It’s been really enjoyable for me to be part of the game here.”