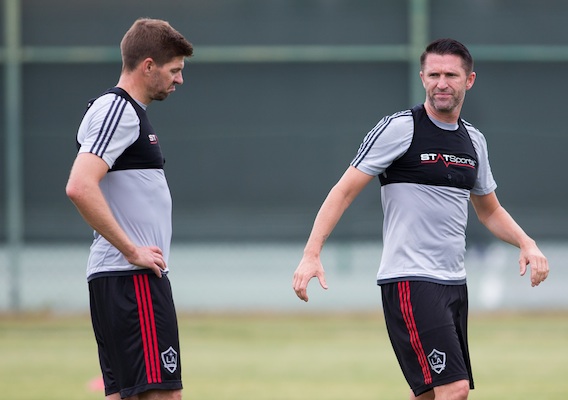 Major League Soccer doesn't like to be known as that league that signs fading European superstars but the brand recognition of Steven Gerrard, Frank Lampard, and Andrea Pirlo helps the league grow.
BY Leander Schaerlaeckens Posted
July 15, 2015
11:10 AM

WHETHER THEY ARE ON T-SHIRTS or actual replica jerseys, the words “David” and “Villa” or “Lampard” are ubiquitous outside Yankee Stadium on the days New York City FC has a home game. At one recent contest, there were even a fair few Italy Andrea Pirlo jerseys, even though he had yet to sign and there was no merchandise bearing his name on sale.

You can call that anecdotal evidence, and you can poo-poo the ongoing—and building—trend of Major League Soccer attracting aging stars to play out the tail-end of their careers, but the inescapable and undeniable truth is that those men with their greying locks and slowing legs still move the needle, and your wallets.

Last weekend, Frank Lampard was supposed to finally—finally, after a year-long wait and all the shenanigans between NYCFC and mother club Manchester City FC last winter—make his debut for his new American club, but pulled out late with a knock. Across the continent, Steven Gerrard did so for the Los Angeles Galaxy in a cash-grabby friendly against Club America, playing his first 45 minutes for a club not named Liverpool.

The former, of course, has spent a long and glorious career with Chelsea; the latter did the same with the Reds. They are, without exaggeration, among the finest players England has produced. As such, they have built vast followings and a repository of fame that won’t run out for decades.

In a week or so, Pirlo joins up with NYCFC as well. He, too, is a bona fide household name—albeit slightly less famous than the others in these parts, perhaps because he never left Italy for Spain or England—and something of a cult figure for his beard and suave affectations.

If none of those three are David Beckham’s equal in their commercial appeal or outright fame, they do combine to constitute the biggest wave of soccer celebrity to wash over MLS since Beckham joined in 2007—and perhaps ever.

Naturally, their price tag is ever so steep.

According to reports, Pirlo will earn some $8 million annually; Lampard and Gerrard about $6 million. The league salary cap this season is $3.49 million—although three Designated Players only count toward it at $436,250 apiece. These signings smack of the league’s strategy of the Beckham era. Back then, Beckham was followed in fairly short order by Juan Pablo Angel, Cuauhtemoc Blanco, Denilson, Guillermo Barros Schelotto, Claudio Lopez, Freddy Ljungberg, Rafa Marquez, and Thierry Henry.

Some worked out well, some not, and some sank without a trace. None of them were on the right side of their prime.

It feels now like we’re reliving that heady time. Yet while teams are free to do as they please, their timing of these moves is curious in that it coincides with a concerted effort by the league to begin shedding the “retirement league” image and pivot to its preferred “destination league” nomenclature. It has done yeoman’s work in bringing U.S. national teamers home, often at well-above-market rates, and has some committed real resources into academies and opportunities for American or homegrown talent.

As of this season, MLS is broadcasting in 86 countries and territories—tremendous distribution for any league. And on Tuesday, the league announced a new distribution deal that would beam MLS games to Australia and Southeast Asia as well, in addition to existing deals for Brazil, China, the United Kingdom, the Middle East, North Africa, and continental Europe. You could argue that this probably doesn’t happen—or happen nearly as quickly—without becoming a sort of senior league, a last-hurrah circuit.

This is the central contradiction in all of this: MLS and its clubs don’t like being identified with the strategy that’s buttressing growth. It doesn’t make for good PR, on account of the ageist stigma in sport. But it’s a sound plan.

Because being a retirement league makes good business sense. Having the talent and the spine of the national team is all good and well, but without name recognition, any product becomes a tough sell. Importing that name recognition lock, stock, and barrel, even while paying a prime for diminishing assets, is the shortest path to market relevance. Attracting famous players and building swanky stadiums are the two things MLS is willing to really splash out on. Looking at it from a business perspective, that’s sound reasoning. Big names fill the expensive stadiums and sell merchandise, and then drive revenue from television contracts. All those things, in turn, help to generate sponsorship.

Which is all to say that when signing a bunch of old dudes who were really good once, but now aren’t quite so good anymore, yet are still plenty well known for once being really good, makes the league viable and accelerates its rise, everybody is a winner. For the reintroduction of this policy—whether consciously or through the actions of a few teams committed to the old model —hasn’t come at the expense of development or bringing in The Right Kind of Player.

Take the Los Angeles Galaxy and NYCFC, the chief perpetrators of the Fading Stars Model. In addition to attracting David Beckham and Robbie Keane—and now Gerrard—the Galaxy have a stronger record in developing youth products than just about any other team in MLS. It has brought up a handful of promising professionals, like Gyasi Zardes and Jose Villareal. It drafted well and developed national teamers like Omar Gonzalez and AJ DeLaGarza. And it has brought in strong young players from abroad, players who stuck around and made the league better, like Juninho. On Tuesday, of course, the Galaxy reportedly also signed 26-year-old Mexico star Giovani Dos Santos, confirming that you can be a retirement league that also attracts good younger players.

NYCFC not only signed Villa, Lampard, and Pirlo, but also lured home a young national teamer in Mix Diskerud and is trying to sign core players for the future from abroad as well. Its elaborate youth academy roll-out, meanwhile—11 affiliate youth clubs, an affiliate league and an academy of its own—suggests its ambition on that score as well.

Signing the kinds of billboardable names that the Designated Player rule was originally intended for hasn’t stopped teams from building from within, or signing less famous but more suitable players. It hasn’t hampered the pursuit of more organic or sustainable strategies. Toronto FC got burned by the Danny Koevermans deal and then saw Jermain Defoe lose interest and turn into a mega-bucks problem. But it then altered course and hit the jackpot with Michael Bradley and Sebastian Giovinco. And as soon as Jozy Altidore has an extended run of good health, he’ll doubtless join them in that category. And all the while, the club built perhaps the finest soccer training facility in North America and invested heavily in a youth academy.

Tempting as it is to compare Major League Soccer to other leagues and speculate when it will be its equal—something the league itself is certainly guilty of as well—it is only in its 20th season. To want to ditch a ploy that has made it recognizable and yet also respectable this soon is probably to throw the baby out with the bathwater.

While team finances are notoriously opaque, it’s probably not untrue when the league says a lot of teams are still losing money—even if such an utterance was self-servingly timed before a collective bargaining agreement negotiation.

And here, at this juncture, it’s probably worth remembering that not so terribly long ago, the English Premier League, now so many people’s model league, was all too happy to be signing aging stars from the Italian league, then the elite competition. In the late 1990s and early 2000s, English clubs eagerly snapped up the likes of Ruud Gullit, Gianfranco Zola, Fabrizio Ravanelli, Paolo Di Canio, Roberto Di Matteo, and Gianluca Vialli. Only thereafter did the EPL begin attracting younger stars.

Those players’ part in making the Premier League what it is now, injecting it with flair and legitimacy, can’t be underestimated. Nor can that chapter in the rise of the world’s richest league be glossed over.

Whether MLS is destined to truly become one of the best leagues is hard to predict—at present, it seems unlikely. But until it does, its zeal to attract players more famous than the teams that sign them will serve it well, even it isn’t quite comfortable with the unflattering label it comes with.