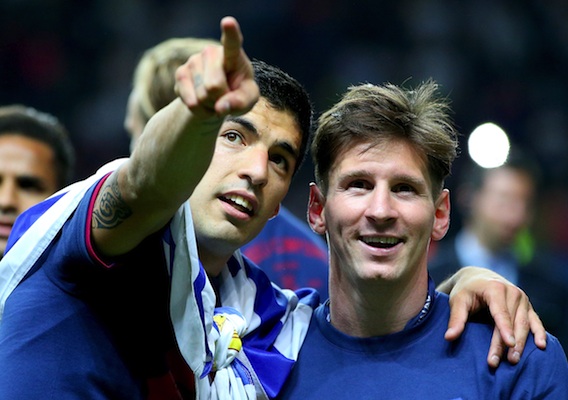 THE BEST WAY to cheapen your product is to associate it with something inferior. And friendlies against barnstorming European teams, whether they be pre- or post-season to the European calendar, dilute Major League Soccer’s credibility and integrity.

Yet the practice of playing friendlies against non-MLS teams in the middle of the season remains commonplace. In July, the Los Angeles Galaxy and the San Jose Earthquakes will take on Club America under the auspices of the International Champions Cup, a tournament invented to lend some gravitas to exhibition games. The Galaxy will also play Barcelona and the ‘Quakes face Manchester United. The New York Red Bulls are to line up against Chelsea and Benfica. That same month, in friendlies not tied to the ICC, Orlando City will host West Bromwich Albion and Toronto FC is slated to play Sunderland.

Keep in mind that the schedule is packed as it is, with several teams having to delve into their depth because they are losing players to the Gold Cup—which is especially true for Los Angeles and Toronto FC.

Now consider that Manchester City came stateside after its Premier League season in late May to play Toronto FC and the Houston Dynamo—although the latter game was canceled because of weather. The Columbus Crew played a friendly with Valencia the same day.

“We got out of it healthy and we kept everybody to the amount of minutes we wanted to keep them to,” TFC head coach Greg Vanney said after the game, boiling down to the essence between a bunch of platitudes about having made an impression in the 1-0 loss. He had kept one star player, Sebastian Giovinco, to 30 minutes and another, Michael Bradley to a half.

Opposing manager-for-now Manuel Pellegrini had some inanities to return on how MLS isn’t so bad after all and how it had been a close game. But then he, too, said something telling about the Reds, who had fielded a slew of inexperienced players. “Maybe they were thinking more about the game they had to play on the weekend,” he said. Indeed, a contest against the ‘Quakes awaited three days later.

If Vanney had indeed prioritized his league game—and rightly so—Crew head coach Gregg Berhalter had come to much the same thinking in his own 1-0 loss to Valencia. For Columbus ran out its scrubs as well. Little wonder. His side had three MLS games scheduled for the next 10 days.

The coaches said the right things about the games, or the things they were supposed to say anyway, but in reality thet treated them like the nuisance they were. Because other than raising a little extra revenue, there is no good or even defensible reason for having mid-season friendlies involving MLS teams.

It’s distracting. It’s needless toil in the hottest months of a season that’s enough of a slog as it is, shuttling teams between disparate climates on endless cross-country flights. And it’s pointless. Friendlies, unless you’re some megaclub that can command major appearance fees, are meant to prepare a team for a season or some tournament. So it’s antithetical to have one mid-season.

What’s more, it sends a terrible message to the fans. It says, whether intentionally or just implicitly, that MLS doesn’t matter all that much. That it’s worth interrupting league campaigns for a kickabout with some famous Europeans who will deliver a quarter-assed effort, at best. It implies that there’s more glory to be won in an unofficial game, outside of any sanctioned competition, so long as the team in the other jersey sells many replicas thereof.

If these games might entertain the local fans – refreshed by an unusual and reputable opponent—and perhaps bring in a few new ones, they nevertheless have very little upside. They aren’t necessary to draw spectators—not anymore, anyway. MLS teams have grown fan bases to very healthy levels, and attendances have climbed steadily.

From a sporting perspective, they make for a no-win situation. If the foreign opponent wins, it’s "MLS still sucks." If the MLS team wins, it’s "Well, Team X is in its pre/post-season. Doesn't count." And those one-off games are hardly liable to make an MLS team better, or to even prepare it for some upcoming showdown with the New England Revolution.

In its 20th season, Major League Soccer still seems to identify and measure itself by the parameters set out by other leagues. But none of those leagues—whether in soccer or any other sorts—would deface the façade of their storefront with graffiti, just because a well-known artist happens to be available to do some spraying. And if they did—there do exist a rare few exceptions—they wouldn’t do it so routinely or casually.

MLS wants to be one of the world’s top leagues. Top leagues don’t ask or allow their teams to break up their seasons for exhibitions against teams from other places. They stand on their own, speaking for themselves.

Pandering to a perception of inferiority, trying to uproot some deep-seated insecurity by playing the clubs from the leagues you’d one day like to be like, just smacks of a desperation for validation.