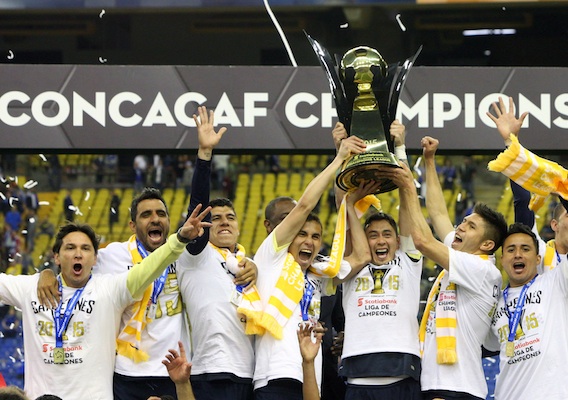 MLS Has Itself to Blame for Champions League Record

American Soccer Now contributing editor Brian Sciaretta believes Major League Soccer can, and should, do a better job of helping its teams succeed in the CONCACAF Champions League.
BY Brian Sciaretta Posted
April 30, 2015
7:45 PM
THE DISAPPOINTMENT of Montreal’s second half last night in the CONCACAF Champions League Final was to be expected and, of course, it is time to examine why MLS has fallen short yet again in winning the continental title.

Let’s be clear, the fact that Montreal made it this far is remarkable. Of all the teams in Major League Soccer, Montreal would probably be the last you would expect to make it to the final. Entering into the series against Club America, the Impact had won just seven out of its last 47 games—including a winless start to the 2015 season.

Yet somehow the Quebec-based team found a way to defeat a Mexican team over two legs in the process in the quarterfinals. Club America, however, was a bridge too far even after Montreal managed a stunning draw at the Azteca.

Clearly, MLS can compete with Liga MX teams on a game-by-game basis, but what is it going to take for an MLS franchise to defeat the best that Liga MX has to offer? It is a question that many are considering at the moment.

Money and Rules: Finances play a key role, certainly, and MLS teams simply do not have the money that Liga MX squads do. That’s obvious. The new collective bargaining agreement brought with it a slight bump in payroll but top-tier Liga MX can and do spend more money on talent than MLS teams.

Club America can afford to pay for not just high-quality starters, but also solid backups—and even third stringers who can make positive contributions. That's why it is one of the biggest non-European clubs in the world. Even if MLS was to eliminate the salary cap, few, if any, MLS clubs would be able to match Club America from a payroll perspective. According to Transfermarkt, 13 out of the team’s 23 first-team players are valued at €1 million or more.

That’s not to say Club America is unbeatable or that it is even smart for MLS to eliminate the salary cap. Raising the salary cap would help but not as much as everyone expects. The likely result would be simply paying more for the same players.

I think MLS rules and restrictions hurt the ability of its teams more than the salary cap. That is perhaps the biggest disappointment of the last CBA deal. Allowing for more free agency (which wouldn’t blow budgets if a salary cap is in place) and maybe even abolishing a draft to allow teams to sign college players of their choosing are just a few changes that would help. This way teams could get players that fit their needs better and players could also have a say where they end up playing.

Overall, the lack of freedom in player movement leads to inferior teams because the decision making is so limited. Teams are not put together as thoughtfully as they could be. Instead, front offices across the league must make the best of very difficult circumstances.

Timing: The timing of the CONCACAF Champions League does not do MLS teams any favors. With the quarterfinals taking place during Major League Soccer's preseason, MLS teams are at a major disadvantage. The situation for the semifinals is only a little better with that round taking place in the opening weeks of the season.

In 2014 the quarterfinal rounds were scheduled a bit later in the year but it is still difficult for MLS teams to compete with Liga MX teams that eight or so weeks into their season.

Better Youth Development: If an MLS team is ever going to win a CONCACAF Champions League title, it will need to be a team that has developed a large number of quality young players. As noted, MLS teams are going to have a huge payroll disadvantage for the foreseeable future. A quality homegrown players, however, are cheap—even the homegrown players that are successful on the field. The more production teams can get out of young players signed through their own academies means the team can spend that money on better talent.

Prioritization: One of the reasons why Montreal found success in the Champions League is because it wanted to have success. The team made the tournament a priority. Montreal advanced to the quarterfinals because it finished higher than the Red Bulls in group play and the Red Bulls treated the tournament like an afterthought. Thierry Henry, Tim Cahill, and other key players were rested.

Then, when Montreal played in the knockout stages, the club took added precautions of traveling to Mexico in advance of its game at Azteca to ensure it was acclimated to the altitude.

MLS teams need to prioritize this tournament and most importantly, the league should help cooperate throughout the entire tournament and not just the way it does in the finals. MLS should alter its schedule so that its teams have a full week to prepare for Champions League games. This would allow teams to be prepared and not have to worry whether or not to sacrifice league games in order to compete in the Champions League.

MLS Commissioner Don Garber is outspoken about his desire for an MLS Champions League winner, but the league needs to do whatever it can to encourage the success of its teams in its only meaningful international competition.

Sadly, MLS fans deserve a bit of the blame too. The attendance among the MLS teams during the Champions League group stages was abysmal. It made it very easy for MLS teams to treat the tournament as an afterthought. The high level of attention to this tournament usually doesn’t happen until the latter stages—if an MLS team is fortunate enough to survive that long. If there was this amount of enthusiasm at the start, you would probably see MLS teams more determined to do whatever it took to succeed.

Liga MX has more talent overall than MLS but there is a big overlap and it is certainly within the capabilities of MLS to perform well in the continental championship. Sadly, MLS seems determined to strangle itself with rules and regulations that are geared toward creating league parity.

The salary cap isn't going anywhere—not for at least five years—and I am OK with that. That is not the major culprit. Instead, opening the system up for greater player movement would encourage creativity among front office staff at clubs to build better teams.

Combine that with a strong dose of leaguewide priortization of the CONCACAF Champions League from a scheduling perspective and suddenly MLS teams would stand a much better chance against Liga MX competition.

The point is, if MLS wanted to do better in this tournament, it could. But will it make the necessary adjustments?