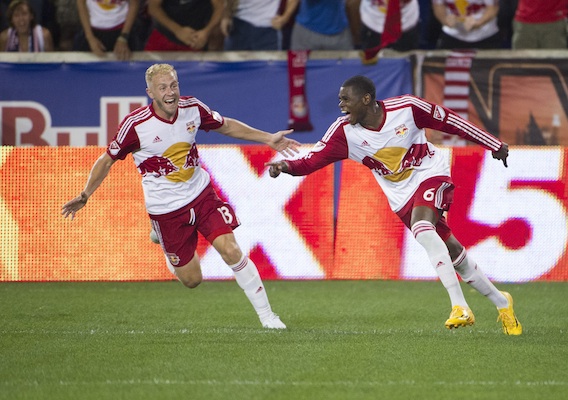 Mike Grella Is Making His Impact Felt with Red Bulls

The journeyman forward was contemplating retirement but decided to give professional soccer one last shot. Suffice it to say that Grella is thrilled to be contributing to a surging New York Red Bulls squad.
BY Brian Sciaretta Posted
August 18, 2015
12:25 PM

The expansion team in the Bronx boasted big-money backers, a star-studded roster featuring David Villa and Frank Lampard and Mix Diskerud, and an MLS Cup-winning coach with aggressive ambitions.

Across the Hudson, meanwhile, Red Bulls management had fired the team’s popular head coach, Mike Petke, watched its best-ever player, Thierry Henry, retire, and committed to a penny-pinching approach that led to the signing of journeyman forward Mike Grella.

Yes indeed. And five months into the season that decision is looking better and better.

The 28-year-old from Glen Cove, N.Y., suffered through plenty of criticism during the early weeks of the season but now he has become a symbol of the Red Bull’s success. On Saturday he delivered a beautiful assist on Bradley Wright-Phillips goal in a 3-0 win over Toronto. The week before he made a splash when he nutmegged New York City FC’s Frank Lampard on a play that sealed a 2-0 win.

“I think I am doing all right,” Grella told American Soccer Now. “But I think working with Ali Curtis and Jesse Marsch has been a huge help to me as a person and as a player. It’s given me stability. I said all year that I just wanted to help this team in any way I could and make the club a better place. I thought the Red Bulls would be a great fit and that I would be able to help the club out. I thought the club would be able to help me.

“And it has worked out very well so far.”

Grella’s rise is to think about how it almost never came to fruition. After finishing his collegiate career at Duke in 2008, where he was a first-team All-American in his senior year, Grella moved to England and signed with Leeds United but subsequently bounced around Europe with teams like Swindon, Carlisle United, Brenford, Bury, and Scunthorpe United. After a brief stint with Viborg in Denmark, he returned to the United States to play with the Carolina Railhawks in 2014.

After his stint with the Railhawks, Grella faced a crossroads. Soccer had always been the biggest thing in his life but he now had a wife and a child on the way. Out of contract, his options were few. He had a few smaller European teams interested but the money was too little. Frustrated, he returned to his native Long Island and prepared for a career away from soccer.

“I had moved on,” Grella said. “I told my wife I was ready to do different things. I had a jobs lined up in insurance and real estate. I was looking into things like that and it was a pretty scary moment for me. It was pretty much the end of my career.

“It was really depressing because I thought it would have been a huge waste of talent.”

“I remember at my lowest point I said that if I could resurrect myself from this, it would be some story,” he added. “One minute you’re getting to play in a huge rivalry and part of such great group of guys and at the other moment you’re out of a job and I couldn’t find anything. I sort of had a misunderstanding as to who I thought I was as a person and as a player. To put that all out there and make things right, I owe a big thanks to my family and to God, and to hard work and perseverance.”

He also credits his younger brother, Frank Grella, who played college soccer at Stony Brook University and now works as a personal trainer. The younger Grella knew what it took to keep his brother motivated and not willing to give up on his soccer career.

“It was definitely a difficult time to see him not playing,” Frank Grella said. “He was struggling and trying to get back into the game. It was sad to see because he has always had so much potential. He was always one of the best. But he never gave up. He always had a dream.”

“Any kind of help I could give him, I was going to do,” he added. “I’d help play goalkeeper if he needed, or help him with his touch—anything to help him be quicker, stronger, better, faster. I’d push him when he was tired and always reminding him he was good enough and that he’ll get through it. Mike is definitely a confidence-based player. So if you give him confidence, he will play better than anyone I know.”

After training with his brother, Grella found motivation to give his career another shot. He began preseason with New York City FC but then received interest from the Red Bulls who signed him after he impressed on a trial.

The beginning of the season was rough and at first it didn’t appear as if Grella was going have a lasting impact with the team and fans and local media berated his play. Jesse Marsch, however, saw that Grella could serve an important role on the team.

On June 24, Grella scored New York’s only goal in a 1-0 victory over Real Salt Lake. The win snapped a four-game losing streak and began the team’s recent strong run that has propelled it into the top tier of the Eastern Conference. After that game, Marsch credited Grella’s impressive mentality and his importance to the team.

“There's been criticism about Mike, right?” Marsch asked rhetorically. “Publicly, in the media, and I just said to him that first of all, within the team, he's established himself and the guys believe in him and having him on the field, everybody knows he's been a big piece for us.  And then, when you're in this business, especially in this day in age, people are going to say a lot of things. I learned that from day one being with this organization.

“But it's important to believe in yourself, have confidence in who you are and what you're about, and in tough moments don't let things phase you, don't be sidetracked by anything and be strong. I think he took that the right way and ran with it and the confidence that he's had over the last month has grown and grown and grown.”

Grella has no regrets about starting his career in the rough-and-tumble lower leagues in England. That said, he now believes that MLS has developed to a point where promising young players should consider a career in the North American top flight before heading overseas.

“The main difference I can find is that you can find space in MLS and that both teams try to play good football and play with the ball on the ground,” Grella said. “They try to implement different systems. I felt England was always a battle and the ball was always in the air.”

Grella’s career, it would seem, is no longer up in the air. Now a steady contributor on one of the best teams in the league, the veteran forward has shifted his focus away from the insurance industry and is eyeing some big prizes.

“I still have huge dreams and huge goals like I did when I was a kid,” Grella said. “I want to play as high as I can—whether that’s the national team or whether that is winning MLS Cup, I just have huge, huge dreams.

“If I ever lost those dreams and played just to make a living or played just to be an average player, I think that would be the day I hung them up. At 28, I am getting up there but I am still in my prime. I still think anything can happen and I have a belief that the sky is the limit.”