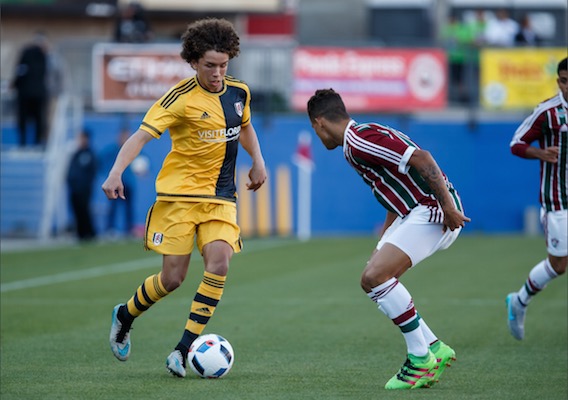 The dual-national who plays for Fulham's youth team got the call from U.S. U-19 coach Brad Friedel and responded with a strong performance. ASN's Brian Sciaretta spoke with the promising right back.
BY Brian Sciaretta Posted
May 12, 2016
7:15 PM

COLLECTING SILVERWARE in your international debut might seem like something straight out of a Hollywood film, and that's exactly what happened to Marlon Fossey last month when he helped the United States U-19 team win the Slovakia Cup.

And it just so happens that this 17-year-old right back hails from Hollywood.

From the United States youth national teams to the senior squad, the background of players has become increasingly diverse over the past decade. Fossey is emblematic of that phenomenon. Born in Tinseltown, Fossey moved back to his mother’s hometown on the island of Jersey at the age of four. It was there, on the tiny British Crown dependency off the Normandy coast, where he blossomed as a soccer player before being spotted by Fulham at the age of 11.

His first tournament on the international stage was an unqualified success as the United States claimed the Slovakia Cup with wins over Georgia and Ukraine in the group stages along with a 2-1 win over Russia in the final.

“Obviously it was my first time playing international football and overall, it was a very good experience,” Fossey told American Socccer Now. “It was more physical than my academy football. The people there were very welcoming. I got a long with pretty much everyone there. It was a good team, as you could tell from our victories and the win.”

His call-up was not completely unexpected as U.S. Soccer had been tracking Fossey’s progress at Fulham for quite some time. The addition of the new U.S. U-19 team provided a perfect opportunity for head coach Brad Friedel to bring in the young Fossey. Long-time U.S. youth international Luca de la Torre is Fossey’s teammate at Fulham and was also called into camp. As a result, Fossey had an easy time assimilating into the team off the field.

On the field, the transition was also very smooth thanks to Friedel whose coaching style fit Fossey’s game. As a younger player, Fossey featured at forward and on the wing. It wasn’t until relatively recently that he converted to right back, and it took him awhile to adjust to his defensive responsibilities since he had a strong inclination to get forward.

Friedel, however, encouraged Fossey to get forward and he proved to be a dangerous offensive weapon. He picked up an assist in the 2-1 loss to Slovakia in the group stages.

“I really liked Brad Friedel as a coach,” Fossey said. “One of his main points was to get players to express themselves—giving players the freedom to do what we do best on the pitch. There are some coaches out there that want things done in a certain way. But he highlighted he wants us to show our individual skill, which helped me a lot confidence-wise.”

It has been an exciting time in both Fossey’s life and soccer career. In addition to the Slovakia Cup, Fossey was also part of Fullham’s Dallas Cup team, which advanced to the finals of the Super Group, including a win over the U.S. U-20 team, before falling in the final to Everton 2-1.

Held in April, the Dallas Cup had added meaning for Fossey since it marked the first time he had returned to the United States since leaving Hollywood 13 years ago. His American ties are clearly mixed, however, as he has no contact and knows very little about his father. His mother was working in the mental health profession in California before returning to her native Jersey.

Should England come calling in soccer, it would be a difficult choice but the United States has made a strong first impression.

“I do feel American, to be fair,” Fossey said. “It will be a hard decision when I have to choose. I guess it will come down to where I feel most valued. I don’t want to be on a team that doesn’t really use me that much. When I was with the USA, they valued me. I felt wanted there. It was a good first experience with the USA.”

His teammates agree. West Brom central defender Danny Barbir was the U.S. U-19 team’s leader on the backline (and wore the armband against Slovakia) and is a strong contender to be on the U.S. U-20 World Cup team. Playing alongside Fossey in the win over Russia, he came away impressed.

“At first he was a little shy, which you expect from a guy coming into his first camp,” Barbir said. “But I was surprised how good he actually was. He’s really strong attacking-wise. He uses his pace and he has good creativity linking up with the wingers and midfielders.  Defensively he was strong as well and positioning-wise, he was on point. I didn’t really have to tell him much because he knows his position really well.”

The first half of 2016 has been important for Fossey but the second half of the year could also be transformative. Recently he moved up within Fulham’s organization from the U-18 to the U-21 team, which has required a physical adjustment.

Fortunately for Fossey, his athleticism is a strong point. In addition to soccer, Fossey spent years also competing in gymnastics at a high level. This has helped with his strength which is on full display in his popular goal celebrations at Fulham. After scoring dramatic goals he sometimes can do a string of 10 straight backflips in quick succession.

Starting next season, he has his sights set on the Fulham’s first team which will play in the second-tier English Championship. If he makes it, he will join the long list of Americans who have suited up for the Cottagers, including Clint Dempsey and Brian McBride along with current first-team players Tim Ream and Emerson Hyndman.

“To be honest, I think I’m pretty close,” Fossey said. “I watch them quite a bit. I think what I need to work on most [to get there] is the physical side. We’re technically trained very well at Fulham.”

Of course, the 2017 U-20 World Cup in South Korea is now on his radar and he lists it as a top priority of his. Making the team will be difficult and the current U-20 right back, Matthew Olosunde, plays for Manchester United’s youth teams.

But if he continues to progress as quickly as he has over the past year, Fossey is confident and eager to make that team.

“Most definitely, that is one of my goals,” Fossey said. “I love playing on big stages and the U-20 World Cup, there will be big crowds and big publicity there. I am definitely striving to get into that squad for sure.”