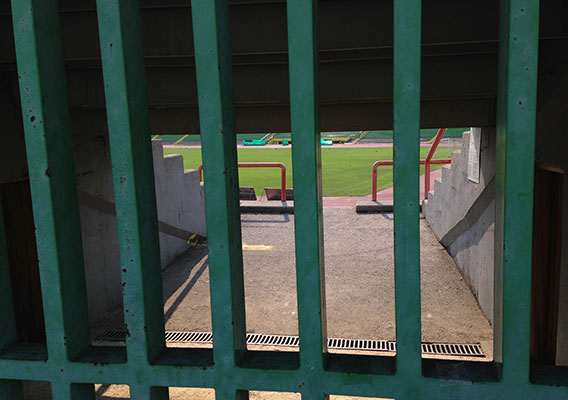 Our man in Sarajevo, Graham Ruthven, confronted language issues, raw sewage, a case of mistaken identity, and sights never intended for visitors' eyes. And it all happened before his first interview.
ASN Slideshow

BY Graham Ruthven Posted
August 12, 2013
9:34 PM
OK, I'LL ADMIT IT. I took a taxi to the wrong stadium for Monday’s U.S. men’s soccer training session. My explanation: I got in the cab, mispronouncing the name of the stadium where Jurgen Klinsmann’s team were training—Grbavica Stadium. After several elongated syllables and labored hand gestures and other futile attempts at communication, the driver replied, “Ah! America! Football?” I nodded.How could that be wrong? It was very wrong. I realized just how wrong when wading through the stream of raw sewage that meandered down the entrance tunnel to the Asim Ferhatovic Hase Stadium, where the United States will face Bosnia on Wednesday (2:30 p.m. Eastern; ESPN2, UniMas). (For a glimpse of Graham's star-crossed tour of Sarajevo, see the slideshow above right.) Upon arriving at the (wrong) stadium, a distinctly intimidating and altogether unfriendly place, I began looking for an entrance, or at least some sort of opening in the concrete fortification that marked the ground’s perimeter. I opened one door, and a suit store stared back at me. Yep, a suit store in a soccer stadium. First time for everything. A woman chased after me, wagging ties in my face. Once I explained to her I was not in the market for neckwear, she told me to venture deeper into a dark and dingy tunnel. That’s how I would get into the seemingly deserted, and derelict, stadium. Once the tunnel doubled back on itself I found myself deep in the bowels of the building. There was a mixed zone, locker rooms, and even a doping room. (I assume that’s where they test for doping instead of where they actually conduct doping.) I gazed through the sturdy-looking gates that guarded the playing surface, gauging the height I could jump on the other side without breaking a leg. I'll admit it: after seeing what Bosnia football stadiums look like I didn’t particularly want to see the inside of their prisons. There was nobody around. Not a soul. I was in the wrong place. After sprinting at least two miles toward the center of the city, I managed to hail a cab. To avoid any confusion this time I showed the driver the spelling of the correct stadium on my phone. Even then it wasn’t simple. Upon attempting to find the entrance to this stadium, the correct stadium, I clambered up a staircase adorning the side of the grandstand. I expected to find a turnstile or something that indicated that a football stadium was on the other side of the wall. Instead I found a family’s lounge. They were all sitting watching TV and smoking pipes, staring at me. I hotfooted it out of there. Finally, after over an hour of taking in sights that sightseers were never meant to see, I found the U.S. training session, and players to interview. On the way home from the training session my cab took me to the wrong hotel. Apparently there are two hotels with the same name in Sarajevo. Next time, I think I’ll walk. Here's hoping that Tuesday is a bit less eventful.