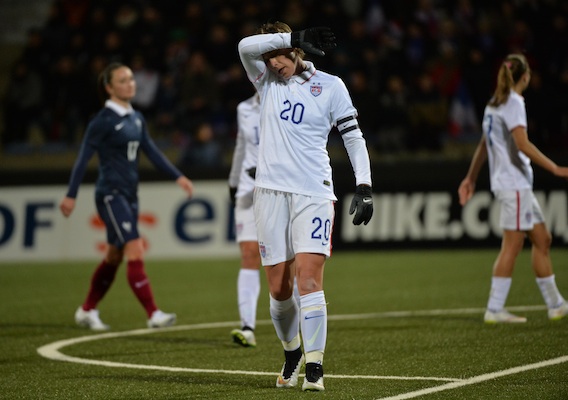 France outplayed the United States women's national team from start to finish and secured a convincing 2-0 victory that will force Jill Ellis to take a hard look at her personnel choices and tactics.
BY John D. Halloran Posted
February 09, 2015
9:55 AM
IF THE UNITED STATES women’s national team and head coach Jill Ellis thought they had faced a lot of scrutiny about the team’s recent struggles, things certainly won’t get any easier after Sunday's 2-0 loss to France in Lorient. France's comprehensive victory—its first in 17 tries against the Americans—came on the back of two second-half goals and shed serious doubts on whether the U.S. women are good enough to win this summer’s World Cup. Here are five things we learned from the match.

1. Outside back remains unsettled

Against France Ellis started Meghan Klingenberg at right back and Lori Chalupny on the left. Klingenberg was one of the U.S.’s strongest performers in World Cup qualifying, but as many pointed out, she faced fairly weak competition. Chalupny, for her part, returned to the U.S. set-up in December, after a five-year hiatus due to concussion symptoms. Neither played well against France.

Klingenberg struggled to handle several crosses and was badly beaten on two occasions. In the 16th minute, a French cross went over her head, only to be fired over the bar by the attacker lurking at the far post. Then, in the 50th minute, Klingenberg was again beaten in the air—this time for the game’s opening goal, scored by Eugenie Le Sommer. Throughout the match Klingenberg also struggled in possession and failed to make an impact on the U.S. attack out of the back.

Kling has had a rough game so far

For Chalupny the France game was a tale of two halves. In the first half she was outstanding, combining tough and physical defending with savvy, veteran positioning. In the second half, however, Chalupny's gaffes led directly to both goals.

Has Chalupny been containing Thomis so far? Yes. Can she keep it up for the second half? That's less likely, she's getting tired. Put KO in.

On the first goal Elodie Thomis beat Chalupny on the endline with a cross that Le Sommer headed into the back of the net. On the second strike, Jessica Houara bested Chalupny and then delivered a cross that drifted over Ashlyn Harris' head and into the goal. Chalupny has started the last four games for the Americans but has been withdrawn early in each of them—never playing beyond the 56th minute. Clearly she is still working her way back to full fitness, but with her second-half performance and Klingenberg’s struggles all match, it may be time to give Kelley O’Hara another look.

O’Hara, the team’s starting left back in the 2012 London Olympics, underwent ankle surgery in the fall of 2013 and has never been given a shot at winning back her spot. While Klingenberg and Chalupny are both quality defenders, and more natural at the position than O’Hara, O’Hara is the best athlete of the bunch and seemingly offers the U.S. a better option against speedy flank attackers.

One big change for the U.S. women on Sunday: the return to a 4-4-2. Fans have clamored for this formational shift ever since Ellis introduced a 4-3-3 last April. For some unknown reason, Carli Lloyd was deployed out of position on the left, away from her normal spot in the center of the U.S. midfield. Lauren Holiday and Morgan Brian struggled to get anything going in the center of the pitch for the U.S. and Holiday, in particular, had an uncharacteristically poor match.

Lauren Holiday hasn't been her best..

Over and over again, Holiday conceded possession as the U.S. midfield was overrun. Lloyd was ineffective on the left while Brian and Tobin Heath—who played on the right—were invisible for long stretches. Heath repeatedly resorted to aimlessly launching the ball up the field and contributed little to the U.S. attack. On one of the U.S.’ best sequences, Christen Press made a run strong and squared the ball to Heath in the area. With a chance for an open shot on goal, Heath whiffed so badly that she fell down.

3. The attack was listless

Neither of the two starting forwards, Christen Press and Alex Morgan, created much. Morgan looked dangerous in spurts, but on three separate occasions her first touch took her away from goal and diminished her scoring chances. After two long injury layoffs, she also, understandably, looked half a step slower than usual. Her best sequence came just before the halftime whistle when she rounded the French goalkeeper, Sarah Bouhaddi, but a French defender recovered in time to block what would have been the first goal of the contest.

Morgan with two great chances but the finishing just isn't there for her right now.

Press, for her part, also looked bright in stretches, but like Morgan she couldn’t find her finishing touch. Press had a great opportunity in the 11th minute but hesitated from close range and then her angle disappeared. On several other occasions Press did well to create opportunities for her teammates but they failed to convert. Second-half substitute Abby Wambach drew a penalty in the 64th minute, but it was a ridiculous call that was an iffy foul to begin with, to say nothing of the fact that the contact clearly occurred outside the box. Justice prevailed as Bouhaddi dove to her right to save Wambach's timid penalty.

Terrible call, but universe evens things out with a terrible PK.

4. Ashlyn Harris Did Her Part

With Hope Solo suspended, Ahslyn Harris started in goal ahead of veteran Nicole Barnhart and upstart Alyssa Naeher. And Harris played well. She came off her line to protect her back line and made two outstanding saves in the first half to keep the U.S. in the game. Both were fingertip pushes over the crossbar on outstanding high shots. In the second half, there was nothing Harris could have done on either goal—despite some chatter suggesting she was caught out on France's second goal.

Harris’ performance on Sunday had to be encouraging for both Ellis and U.S. fans, especially considering that Solo’s World Cup status is still in doubt.

Last week U.S. Soccer announced a series of proposed changes for its development program, with Ellis saying somewhat presciently, “If we sit where we are, we'll get run over.” Given Sunday's match and the team's recent performances in Brazil, it's safe to say that the U.S. is no longer the dominant power in women's soccer. There are a number excuses available to Ellis, the team, and its fans—if they want to use them.