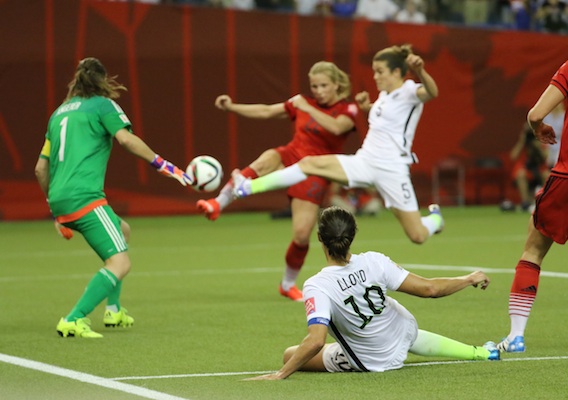 Lloyd and O'Hara Score in U.S. Win Over Germany

After a hard-fought first half ended without a goal, a resilient U.S. women's national team scored twice in the second interval to defeat Germany, 2-0, and reach the 2015 World Cup Final.
BY John D. Halloran Posted
June 30, 2015
11:00 PM

THE UNITED STATES women’s national team is headed to the World Cup final on Sunday night in Vancouver (7pm ET, Fox). The opponent is yet to be determined, but a gritty U.S. team earned its way to the championship match.

Courtesy of second-half goals from Carli Lloyd and Kelley O’Hara, the U.S. beat back a feisty German side, 2-0, in a seesaw battle on Tuesday night in Montreal. The win propels the Americans to their fourth final in seven World Cups. Here are three thoughts from the win.

At a stage in the tournament when teams are often scared of making mistakes and play with caution, neither side held back on Tuesday. The Germans opened the match with overwhelming pressure and it took the Americans a few minutes to settle down and work their way into the match.

But once the Yanks calmed themselves, they began to create chances in bunches. The problem was they couldn’t seem to finish any of them.

In the seventh minute, defender Julie Johnston made a near-post run and headed a Megan Rapinoe corner kick low and on-frame, but German goalkeeper Nadine Angerer was able to parry the ball away.

Then, in the 14th minute, Tobin Heath played a beautiful through-ball between two German defenders to a streaking Alex Morgan. In on goal alone, Morgan shot the ball directly at Angerer, who had to do nothing but stand there to make the save.

Just before halftime, in the 43rd minute, it was Morgan again. Becky Sauerbrunn found the striker open inside the box and Morgan beat her defender with a nifty touch to go in on Angerer again. However, Morgan so badly mishit her shot that it went over the touchline for a throw-in rather than over the endline for a goalkick.

Snakebit, the Americans headed into the locker room in a scoreless tie with the No. 1-ranked Germans.

In the second half, a series of dramatic calls from the referee dictated the action.

First, in the 59th minute, Johnston—who has been excellent all tournament—failed to clear away a bouncing ball in the box and German attacker Alexandra Popp snuck around her for a chance on goal. Johnston attempted to put Popp off balance by giving her a tug on the shoulder and got caught doing so. She was whistled for the foul, which resulted in a German penalty. (Johnston received a yellow card and was not sent off for denying a goal-scoring opportunity.)

Oh my goodness that is an absolutely stone cold red card

Germany's Celia Sasic stepped up to take the penalty for the Germans, but missed, the first time a German woman had missed a penalty kick in 18 tries in World Cup history.

Only eight minutes after the missed penalty, as so often happens in soccer, the missed opportunity came back to haunt the Germans. Morgan received a ball outside the box and drove at her German defender. She was taken down (the foul may have occurred outside the box) and another penalty was given.

Lloyd stepped up for the U.S. and hammered the penalty home, giving the Americans the lead and the momentum. Then, in the 84th minute, Lloyd was instrumental again, this time sealing the game for the U.S. She took a pass from Meghan Klingenberg, beat her defender to the endline and laid a waist-high pass across the face of the goal. A streaking Kelley O’Hara, who had entered the game as a 74th-minute substitute for Heath, karate-kicked it mid-air for the goal and the win.

U.S. head coach Jill Ellis has endured plenty of criticism since taking over the team 16 months ago. Her tactics and personnel decisions have been widely mocked, but on Tuesday, she got it all right.

Finally moving to a 4-2-3-1 to take advantage of the midfield combination of Lauren Holiday, Lloyd, and Morgan Brian all at the same time (a position ASN advocated last December), the U.S. played its best soccer in recent memory. The team’s midfield combinations were crisp and the ball moved quickly and freely from touchline to touchline.

Brian was an absolute maestro for the U.S. in the center of the pitch while Holiday and Lloyd did their part and Megan Rapinoe and Heath patrolled the wings. Morgan—her missed chances aside—did look good in other aspects of her game and created a number of opportunities for herself and her teammates.

But one has to wonder: Why did Ellis wait until this game to go with the idea?

One theory floating around is that she was sandbagging all these months and just waiting for the right moment.

@kevinmccauley If Jill Ellis has been sandbagging all the damn time, she should be manager for lyfe.

But that seems unlikely, as even the U.S. players admitted—assuming they weren’t lying—the other day they hadn’t spent time in practice working on such a formation. And, absent Shannon Boxx (and considering Ellis has never used Lori Chalupny as a defensive midfielder), there is no replacement on the roster for Holiday, Lloyd, or Brian in that midfield triangle should any of them get injured or otherwise need a substitute. Such a moment almost happened against Germany, as Brian took a nasty head-to-head collision in the first half.

If Ellis had been sandbagging, it seems likely the U.S. would have another viable center midfielder on the roster.

The decision seems most likely the product of Ellis realizing she needed the extra player in the midfield. And perhaps the coach realized, especially after Brian’s excellent performance in the quarterfinals, that she could no longer keep the 22-year-old off the field. The gutsiest part of the decision was that she ostensibly benched Abby Wambach to make it happen.

The U.S. will now play either Japan or England in the final, with those two teams playing tomorrow in the other semifinal.

The Americans will almost certainly stay in the 4-2-3-1 and continue to benefit from an exemplary defense, which has now brought the team's scoreless streak to 513 minutes. To date, the backline of Klingenberg, Sauerbrunn, Johnston, and Ali Krieger (with Hope Solo in net), has a 0.17 goals against average in their 12 career starts together and has been a key factor in the U.S.’ progression in the tournament.

The biggest worry for the U.S. headed into the final is the absence of an in-form striker. Despite bringing five forwards to Canada, Morgan has not fully recovered her form after three major injuries over the past 18 months; Wambach has aged past her best; Sydney Leroux is in a funk; Amy Rodriguez can’t finish; and Christen Press has become the forgotten woman on the U.S. roster.

However, it must be said that the U.S. has continued to grind out victories throughout this entire tournament and only needs to do so one more time to become world champions.