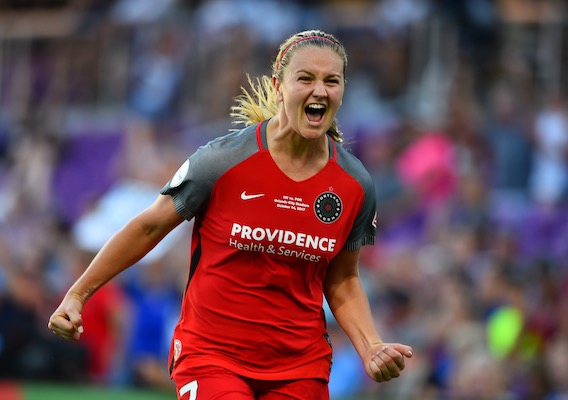 The 23-year-old national team regular scored five minutes after the break and the Portland Thorns held onto the lead, defeating the North Carolina Courage in the NWSL finale.
BY John D. Halloran Posted
October 15, 2017
2:00 AM

Only an hour earlier, in the 50th minute of the NWSL Final, Horan had scored the only goal of the contest, leading her team to its second title in five years. Portland would hold onto the lead, eking out a 1-0 win over the North Carolina Courage and Horan would go on to win Most Valuable Player honors for her efforts.

However, as Parsons and Horan addressed the media following the game, the midfielder could only think about the two of her teammates who will be moving on to Europe now that the season is over.

“It’s very emotional,” said Horan. “When he started talking about [Amandine] and Nadia—it’s really hard for me to see them go. They’re such an important part of this team and they’re my close friends now, so it is really sad for me to see that. I’m emotional. I’m so proud of them and everything they give this team.”

From the start, the league final proved to be a physical affair, with first the Thorns and later the Courage delivering up multiple spicy tackles. Even as hard challenges came thick and fast, the center official seemed content to let the teams play, especially early. It turned the contest into a choppy affair, one that seemed destined for a hardscrabble goal, or set piece opportunity.

“It was a battle, it was brutal,” noted Horan. “We’re a team that likes to play and get on the ball and North Carolina didn’t allow us to do that. Their game plan really worked out. We held in there. Our defense was incredible. I credit our backline so much.

“The work we put into this game—everyone was out there to win and give 100% and we ended up getting a goal off a set piece. [Emily] Sonnett played me a great ball in and we came out with a win.”

Sonnett helped anchor Portland’s defense in the game and has been friends with Horan since the two were just kids coming up in U.S. Soccer’s youth setup. As such, it seemed particularly fitting that the two connected for the winning goal.

“I’ve known Lindsey since I was 14. She’s worked extremely hard,” said Sonnett. She later added, “I just joke that she’s been practicing those volleys since 1994.”

Parsons, for his part, was just happy Sonnett’s delivery fell to his star midfielder.

“Lindsey is the best and biggest in the enormous games,” he said.

“I’m thankful the ball dropped to her and knew it was only going to end up in one place.”

Last season, after winning the NWSL Shield as the league’s best regular season team, the Thorns suffered a devastating loss in the semifinals. The defeat came at the hands of the Western New York Flash, who this past off-season moved to Cary and became the North Carolina Courage.

In that contest a year ago, the Flash scored the final goal in the 121st minute of extra time to win 4-3. Horan said that loss helped lay the seeds of this year’s championship run.

“I didn’t get over [last year’s] loss for a very long time,” explained the midfielder. “We’ve worked so hard this whole season to get this win. Our team’s been through a lot and it was not easy whatsoever.

“We had losses, we had games where we did not play the Portland style of play. To come out and really become a team at the end in these last few games was truly remarkable. How our team came together and played today and battled—I’m so proud of them.”

The win, according to Horan, was the first time she’d ever “won anything.”

Yet Parsons thinks it’s just the beginning for his 23-year-old midfielder.

“This is the start, there is no midfielder in this league that can do what she can do.”