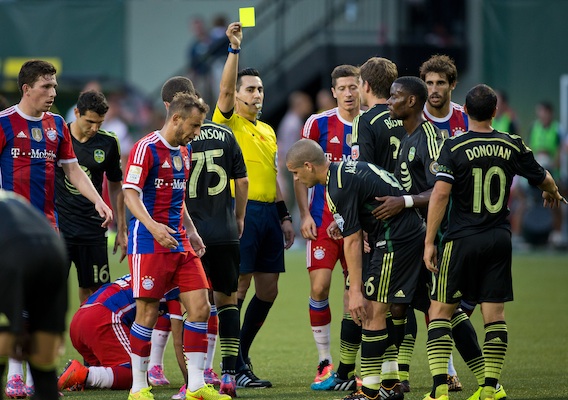 Let’s Change the Format of the MLS All-Star Game

MLS is past the point where it needs to lure some European power, or even Tottenham Hotspur, to make its annual summer showcase relevant. Here are a few thoughts for you to consider.
BY Leander Schaerlaeckens Posted
July 28, 2015
9:00 AM

IN A FEW DAYS, a 20th Major League Soccer All-Star Game will be upon us and we’ll go through the pageantry and pretending anew. Just outside of Denver, an unruly band of elected and appointed MLS players will face Tottenham Hotspur, the latest European club wrangled into facing the All-Star team—which, by the way, makes it more of an All-Star Team Exhibition Against Some Other Team than it does an actual all-star game.

There will be festivities and there will be fuss. Some will even seek to find any kind of significance in the whole thing. Never mind that Spurs are in its preseason and that there’s absolutely nothing at stake for the MLSers, who will collect their bonus and plaudits regardless of how they perform. A few will see it as some kind of referendum on the state of the league—but never on the state of the opponent.

An all-star game is a weird kind of construct, designed to self-glorify and, essentially, deify a company’s own product—it’s basically an extended TV commercial. But as a sporting endeavor, it remains a hard sell on people who feel that the point of competition is real competition—not one-off exhibitions staged entirely for commercial reasons.

That this game isn’t entirely serious was underscored by league commissioner Don Garber’s decision to bestow his so-called commissioner’s picks—a tool seemingly designed to correct any perceived oversights by the public voters or prevailing coach that might hurt the bottom line— upon Steven Gerrard and Frank Lampard. They are the fresh veteran imports from England, brought over to cater to the Anglophile set. Neither man had played a minute in the league at that point—Lampard still hasn’t. They are stars to be sure. But MLS stars? No. Not yet, anyway. (Although, in fairness, Gerrard’s competitive Los Angeles Galaxy debut, which yielded a goal and an assist in just one half, stands as a stark rebuttal to that point.)

But leaving that aside, if the entire point of this exercise is to show off the league in the most flattering light possible, why invite another team from another country? There was a time, a short while ago, where this policy was a necessity. Early MLS All-Star Games had looked like flat kick-abouts between a few old stars and a lot of nobodies. The game needed an injection of star power, which was found in the form of a famous opponent.

Such a contest, however, creates a no-win situation for MLS. To skeptics, of which there are many, it only serves to reinforce negative stereotypes. If the league’s team, thrown together a day or two before the game, loses to a proper club, the perception is cemented for many that MLS still has immense ground to gain. If the All-Stars win, then, well, it was merely against an opponent having a preseason ramble on some backwater American heath, quarter-assing its effort.

Which leaves one to wonder why, aside from the manufactured buzz, which the league hasn’t really needed in recent years, would you bother with this game at all?

Conformism, probably. To fit in with what other American major leagues do, a habit MLS is still all too keen to persevere with. But if you insist on having a game, why not field two actual MLS teams? And make an actual MLS All-Star Game, wherein the players are all stars of MLS?

There’s enough star power in the league now to spread it across two teams—thanks, ironically, to the recent influx of the likes of Lampard and Gerrard. That could actually be a more powerful promotional vehicle than to play the role of the Washington Generals again to some hired guns acting as the Harlem Globetrotters.

But perhaps the way to really add tension to this game—if that is even anyone’s intent—is to incentivize it, somehow. Major League Baseball’s decision to bestow home-field advantage for the World Series to the representative from whatever league wins the All-Star Game is loathed by many. The idea behind it, however, is sound. By introducing real consequences to the game, it becomes a better product, even though managers still cycle through all the players who have apparently earned minutes.

While that exact setup can’t happen in MLS, since home-advantage is already allocated by the Supporters Shield standings, there are other possibilities.

Playoff implications seem to be the quickest road to relevance. This season, 12 teams will enter the playoffs for the first time—up from 10 the last three years. Perhaps with an actual All-Star Game, the winning conference could steal the lowest-seeded play-off spot from the other side. In other words, if the West won, its seventh-seeded team would claim the sixth seed in the East and play on the other side of the bracket.

Or the winning conference could gain a wild card, allowing a seventh team to enter into its own side of the bracket, or indeed the other, facing off with the sixth-seeded team in a play-in game.

This kind of structure would reward the winning conference of the All-Star Game by giving another one of its teams a shot at lifting the MLS Cup. For the players, such an incentive would immediately make the game urgent, because winning it would improve their chances of reaching the postseason with their club teams.

The league could promote the actual importance of the game. And the fans would finally get a contest with real tension.

The MLS All-Star Game, in other words, could be a real game.