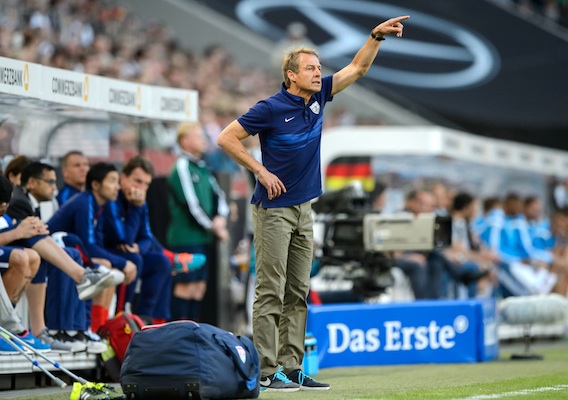 ASN's Brian Sciaretta takes a close look at Jurgen Klinsmann's Gold Cup roster and explores why certain players were chosen, why others were not, and what you can expect after the group stage.
BY Brian Sciaretta Posted
June 24, 2015
10:15 AM

All four MLS veterans were named to Jurgen Klinsmann's 23-man Gold Cup roster that will try to defend its continental title and secure passage to the 2017 Confederations Cup.

Klinsmann has experimented with personnel across the 12 friendlies held since the 2014 World Cup, but at the end of the day he chose a team that will look very familiar to American fans. All told, 17 players on this squad also traveled to Brazil last summer.

Which is odd when you consider some cutting remarks Klinsmann made about his 2014 World Cup team.

“Shifting fast and closing down gaps and doing all those things you need to do in order to avoid 20 or 25 shots on goal from Belgium,” Klinsmann said in a roundtable with reporters in March. “You look at it and you say, ‘They gave everything they had. Look at that. Their work rate, it was all in.’ But the reality was we opened the game up to Belgium. That was the reality. The midfield didn’t do its job to filter a lot of balls. It was their job to go one on one against guys we told them to.”

“I watched this game over and over,” Klinsmann added. “Holy moly, there’ a big learning curve ahead of us.”

So is the 2015 Gold Cup roster so strikingly similar to the 2014 World Cup team because the next generation of American players failed to make a strong enough case to supplant the old guard? Or is it simply that Klinsmann places a high values on his familiarity with the core group?

Fortunately for the Yanks they won't face any team as talented as Belgium. This is CONCACAF, remember, and the U.S. won both the Hex and the Gold Cup easily in 2013. But what about preparing the next generation for next year's Copa America Centenario, or the 2016 Olympics, or the Confederations Cup? When does Klinsmann help the next generation deal with that “big learning curve”?

Yes, there are some promising new names on this roster (Ventura Alvarado, Gyasi Zardes) and others might have been left off because they are in uncertain situations with their clubs (Bobby Wood). But as you look up and down this roster it certainly seems like Klinsmann is looking backward rather than forward.

Bob Bradley relied heavily on his 2010 World Cup team at the 2011 Gold Cup, and that team looked stale compared with the team that won its group in South Africa. So stale, in fact, that Bradley was fired after the U.S. lost to Mexico in the 2011 Gold Cup final.

This Gold Cup will likely mark the competitive debut for a number of U.S. national team players who have only featured in friendlies up until now. Alfredo Morales, William Yarbrough, Ventura Alvarado, and Gyasi Zardes will now have a chance to step into a bigger spotlight.

While Morales has been in and out of the system for several years, there is a big opening at the defensive midfield position. Kyle Beckerman and Jermaine Jones are both on the wrong side of 30 and Morales now has the opportunity to seize that position from the aging veterans.

Zardes has looked better and better for the Los Angeles Galaxy in recent weeks and his goal against the Netherlands was a lovely strike. Will he give the team another legitimate scoring option? Juan Agudelo didn't make the Gold Cup squad but he is on the 35-man provisional roster, and Rubio Rubin is on the rise. Zardes  will likely get a chance to shine and it will be fascinating to see what he does with it.

The goalkeeping position is a bit unsettled for the U.S., with Tim Howard taking a break from international play (the Everton backstop has said he plans to return in the fall) and Brad Guzan's starting role at Aston Villa no longer set in stone. Will William Yarbrough get an appearance in this tournament? And if he does, can the 26-year-old make inroads against his significantly older teammates?

Similarly for Alvarado, there is a very good chance that he will play significant minutes in the group stages alongside John Brooks—his backline mate in U.S. wins over the Netherlands and Germany. With a strong tournament, he could establish himself as a first-team regular.

There is a side benefit as well with Alvarado, Yarbrough, and Morales. All three are dual-nationals and an appearance at the Gold Cup would cap-tie them to the United States national team.

When you look at the roster, the most striking area of concern is the fullback position. In fact, Timothy Chandler is the only player on the team right now who plays regularly for his club as a fullback. Brad Evans, Fabian Johnson, and Tim Ream are all familiar with the position but all play a majority of their minutes at other positions.

Again, this is sufficient for the group stages at the Gold Cup but it is not a long-term solution. Yes, a few players might not be available for this tournament for a variety of reasons but the fact that the national team manager is forced to rely on a bunch of players who only play fullback as a secondary position should be concerning.

Snubs, and Changes to Come

It's hard to know who was snubbed until the knockout stages arrive. After the group stages, the teams that qualify for the quarterfinals are allowed to make up to six roster changes. In the past, many national team coaches have taken advantage of this rule.

It's entirely possible that Klinsmann cut deals with MLS clubs to prevent them from being overly taxed. For example, does Klinsmann take both Brad Davis and DaMarcus Beasley from Houston (who are missing players to other countries as well) or just use one for each segment of the tournament? Similarly with Sporting Kansas City, Klinsmann may have agreed to use Graham Zusi for the group stages and then free him up for the knockout rounds so he could utilize Matt Besler. In 2013, Besler was added after the group stages, as were Omar Gonzalez and Eddie Johnson—both first-team regulars at the time.

New England is already without the injured Jermaine Jones, so perhaps Klinsmann further deplete the Revolution by selecting Juan Agudelo and Lee Nguyen until the quarterfinals.

Here are the players most likely to be added ahead of the quarterfinals.

1. Matt Besler—Central defense will be key to defeating some of the best teams in this region and Besler is an experienced central defender with Gold Cup, World Cup qualifying, and World Cup experience.

2. Juan Agudelo—Though still inconsistent, the 22-year-old forward is still a significant talent—and he is a decade younger than Dempsey and Wondolowski.

3. DaMarcus Beasley—It's highly unlikely that Klinsmann called Beasley “out of the blue” (as Beasley recently put it) and convinved the Fort Wayne, Ind., native to unretire only to not use him in this tournament. It would be very, very surprising if Beasley was not added to the roster after the group stage.

4. Brek Shea—While he might be dealing with a few injuries at the moment (as Paul Tenorio at the Orlando Sentinel reported), Shea seems like a likely addition given that Klinsmann has worked especially hard at playing Shea at left back in 2015. He remains a threatening option at left wing too.

5. Perry Kitchen—He is having a good season with D.C. United and looked solid against Mexico in March.

6. Jordan Morris—The Stanford undergrad has the speed to run at defenders and he could use the Gold Cup as a springboard into October's Olympic qualifying tournament.

What do you think of this unit? Share your take below.