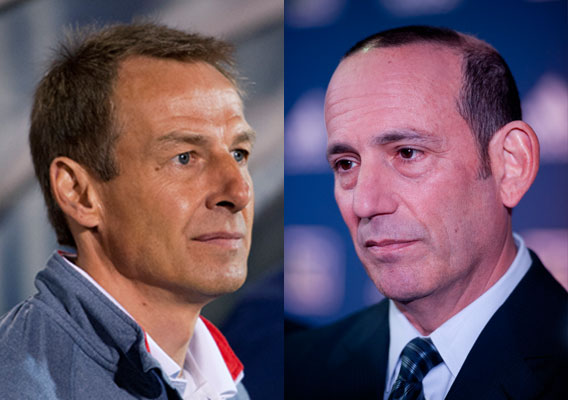 Klinsmann-Garber Spat Highlights Failings of Both

Jurgen Klinsmann publicly criticized MLS. Then Don Garber called a press conference to complain about it. And now ASN columnist Brooke Tunstall says both grown men should be sent to their rooms.
BY Brooke Tunstall Posted
October 16, 2014
10:34 AM
“I made it clear with Clint’s move back and (Bradley’s) move back that it’s going to be very difficult for them to keep that same level that they experienced at the places where they were. It’s just reality. It’s just being honest.”
—U.S. national team coach Jurgen Klinsmann “Jurgen’s comments are very, very detrimental to our league. They’re detrimental to the sport of soccer in America and everything we’re trying do north of the border. And not only are they detrimental, I think they’re wrong.”
—MLS Commissioner Don Garber


THE THING THAT ANGERS ME most about this whole hot-air kerfuffle between U.S. national team coach Jurgen Klinsmann and MLS commissioner Don Garber is that it distracts from so many actual issues that are in both of their interests to address. So yeah, Klinsmann probably could have been more diplomatic when he said returning to MLS from Roma and Tottenham may have negatively impacted the form of Michael Bradley and Clint Dempsey. But motivating his players is part of a national team coach’s job and Klinsmann isn’t the first coach to challenge a player’s club choice publicly in an attempt to light a fire.

And sure, defending MLS is Garber’s job. But while Klinsmann could have been more diplomatic, Garber should not have been so thin-skinned about it. After all, Klinsmann has a history of saying things that aren’t fully thought out or that his actions don’t back up. As such, his comments should be easy to brush off. Klinsmann, after all, is the guy who said he wanted his U.S. national team to be bold and attack in the World Cup...then proceeded to bunker for most of the tournament. This is a guy who emphasizes the importance of club form then puts Julian Green, who had exactly one first-team appearance at the time, on his World Cup roster while a Champions League player like Sacha Kljestan gets ignored. This is a guy who criticizes college soccer then calls up a college player to the senior team and sends his son to play college ball. Politicians have more conviction to their comments. So Garber should have taken the high ground and just ignored them and let them drift into the Ethernet abyss alongside Klinsmann’s emphasis on utilizing Mexican-American players or his claim before the Belgium match that the U.S. should plan on staying through the semifinals of the 2014 World Cup. Klinsmann’s comments about the impact of MLS on Bradley and Dempsey would have been easy to ignore—especially when they coincide with Jermaine Jones’ continued presence on the national team despite his advancing age and the fact that he joined the New England Revolution this season.

Instead Garber came across as insecure and whiny in a way seldom seen from an MLS leader since the best-forgotten days of Doug Logan constantly lamenting the lack of coverage of his league—then bristling when the coverage wasn’t glowingly positive. MLS is better than that and Garber should be too. Worst of all, this silly spat distracts from the real issues both Klinsmann and Garber have to deal with—many of which require the pair to work in concert to forge solutions that are best for both the growth of MLS and the improvement of the U.S. national team. For instance, MLS has a collective bargaining agreement to hammer out with a players association that is in no mood to compromise after all the significant financial gains the league has made since the last CBA was signed. The league also has the Chivas USA mess to sort out; the stadium issues in Washington, Boston, and Miami; and a slew of off-field developments like the inception of reserve teams in USL Pro that will force the league to figure out how it loosens its rules to reward teams that scout, sign, and develop young talent. This last issue is of huge import to the U.S. national team because it could lead to more and better developed young players. This is an issue where Klinsmann and Garber should be working together to hammer out a solution. You’ve also got a player acquisition system for young players, Generation Adidas, that the U.S. Soccer Federation's youth technical director, Tab Ramos, has said is inadequate. That should be addressed. The USSF and MLS also need to be working in concert to improve scouting and create centers of excellence to find and develop players who don’t live near an MLS market or even a U.S. Soccer Developmental Academy team. They should be working together to better fund the MLS academies so the best available youth coaches in each MLS market are the ones in charge of developing the future pros. (It's definitely not happening now.)

Klinsmann has his work cut out for him. The reality is that right now he talks a better game than he coaches. As pundits like Alexi Lalas of ESPN have pointed out, he’s basically done nothing as national team coach that Bruce Arena and Bob Bradley didn’t do before him: win CONCACAF, win the Gold Cup, take a big scalp or two in friendlies or smaller tournaments, and get to the second round of the World Cup. (Arena actually made the quarterfinals in 2002.) I get that Klinsmann wants to shake the MLS tree. It’s a tree ripe for it and, quite frankly, it should be part of the national team coach’s job to be a sort of soccer critic-at-large in the country he coaches, including the domestic league. But his tree-shaking would be a little better received if he actually did something to warrant his lucrative contract extension and dismissive tone. Talk is cheap but so far in his tenure Klinsmann has done more with his mouth than he has with his tactics and player acumen. Until that changes, his words are going to ring hollow. I HAVE TWO YOUNG SONS. They’re great kids and they are usually very well-behaved. But every once in a while they’re complete brats to each other or their parents and they need to be separated and sent to their rooms to cool down. Usually when they emerge from their rooms they’re ready to play nice with each other again and they’ve returned to being the great kids they usually are. Unfortunately for Garber and Klinsmann, there was no one to send the two of them to their rooms and let them cool down and this allowed a molehill to become a media mountain. Garber was right—MLS and the USSF are inextricably linked, just like my sons are. But that’s why it’s incumbent upon him to let the hot air from Klinsmann dissipate, find the fair criticism in some of his comments, and work together to deal with the issues of importance that both sides need addressed for American soccer—not MLS or the USSF—to grow to a new level. Brooke Tunstall is an American Soccer Now contributing editor and ASN 100 panelist. You can follow him on Twitter.