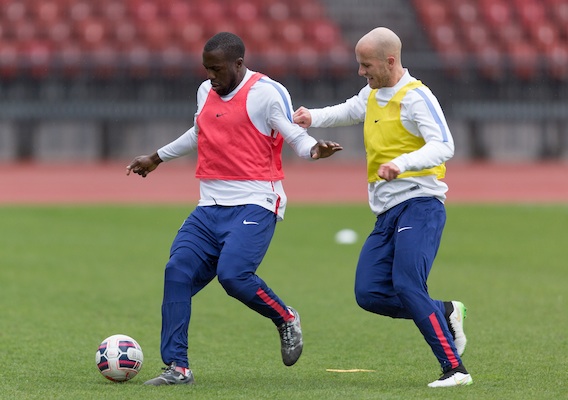 The coach, the captain, and the starting striker spoke with ASN from Zurich ahead of Tuesday's match against 12th-ranked Switzerland. The consensus? The U.S. has to do better in crucial moments.
BY Andrew Gastelum Posted
March 30, 2015
2:30 PM

Naturally, the U.S. national team has enjoyed its stay in quaint and charming Zurich over the past four days, but blowing an 84th-minute lead doesn’t settle well when you’re in the business of following up an impressive World Cup performance in Brazil with even bigger goals in sight, Klinsmann said.

“It’s a learning experience to grow as a team, as a soccer nation and we had very similar experiences,” Klinsmann said at his official press conference Monday. “Our goal down the road is to get further [in the World Cup], to improve, to grow further, and play the best teams possible all the time to measure ourselves and that’s what it will be tomorrow night against the [12th] ranked team.”

If anything, the days between the 3-2 loss in Aarhus, Denmark and tomorrow night’s friendly against Switzerland have given the U.S. time to let its disappointment stew, iron out holes in its defensive tactics, and focus on the next opponent.

“We’re hoping to go through the whole 90 minutes and not lose a game in the last couple minutes like we did against Denmark,” Klinsmann said. “I think we had a very good week here in Zurich where we were able to focus on elements where we want to do better tomorrow night tactically… If we learn against Denmark not only getting through the 84th minute but getting 90 minutes through to be a goal up and have the lead, that’s what we look to do tomorrow night.”

In the downtime between games, Klinsmann was on hand to witness Switzerland’s 3-0 dismantling of Estonia in Euro 2016 qualifying on Friday. That game left him impressed with the quality of his Swiss hosts. However, the coach said he doesn’t plan to make too many adjustments to his lineup.

“There will be a few changes, but overall we try to stay consistent,” Klinsmann said. “Obviously we have a bit in mind for the summer and don’t want to throw it all overboard. At the same time we want to see a couple faces for the first time.

“We have William Yarbrough coming out of Leon we’re really excited about, Ventura Alvarado from Club America. If there’s an opportunity to give them time to grow into this group, that would be nice. But also we want to see consistency a little bit with the players that started in Aarhus against Denmark.”

One change Klinsmann will be forced to make involves who to pair with Jozy Altidore in attack. Aron Johannsson, who scored the second goal against Denmark, will miss tomorrow’s match as he’s being treated with a toe infection. As a result, the U.S. called up Stanford University sophomore Jordan Morris from the U-23 team, who Klinsmann listed as a potential replacement along with LA Galaxy midfielder/forward Gyasi Zardes and Utrecht forward Rubio Rubin.

“It a definite blow because the best is yet to come for Aron,” said Altidore, Johannsson’s former teammate at AZ Alkmaar. “Every time he takes some steps forward he gets a little injury. So I’m disappointed for him because he’s such a good player and hasn’t shown his best yet and there’s a lot more he can offer.”

A major talking point for the U.S. national team continues to be its late defensive collapses since the World Cup. In those eight matches since Brazil, the U.S. has given up seven goals in the last 10 minutes of its matches. Against Denmark last Wednesday, Nicklas Bendtner scored two en route to his first international hat-trick, something Klinsmann attributes to a lapse in concentration rather than a lack of experience in defense.

“I would say it was a lack of concentration, individual mistakes,” Klinsmann said. “Both goals at that level, you can’t allow. Every goal you concede is a sequence of a couple of mistakes that happen. And that’s what happened with both goals. It’s frustrating because we were really good until the 80th minute. We had control of the game, they pretty much didn’t create any chances until the 84th minute then. It’s something you learn.”

U.S. midfielder Michael Bradley, filling in as captain for the injured Clint Dempsey, reiterated Klinsmann’s call for improvement and focus in the match’s final moments. Although there is no Matt Besler, Omar Gonzalez or Geoff Cameron on the back line, Bradley said new players have stepped in.

“We’ve got some young players who have been brought in and some new players who are being given opportunities not just to be here but to play big roles,” the Toronto FC captain said. “It’s exciting, it’s how a team evolves and grows and improves and it’s also then normal that along the way there are some bumps and moments where things don’t go perfectly.

“For us, we’re very honest and very hard on ourselves. We don’t just use this idea of a transition phase as an excuse. We feel like we still have to find ways to win and especially when you look at certain moments along the way we deserved to win, we should have won some of these games. The reality is we haven’t and it’s down to us to find the right way while we are improving and transitioning to still make sure the results are right.”

Transition phase or not, for everyone involved, it seems, this is a learning experience.

Andrew Gastelum will be covering the U.S. men's national team in Zurich over the next few days. This is his first piece for ASN and we really think you should follow him on Twitter.