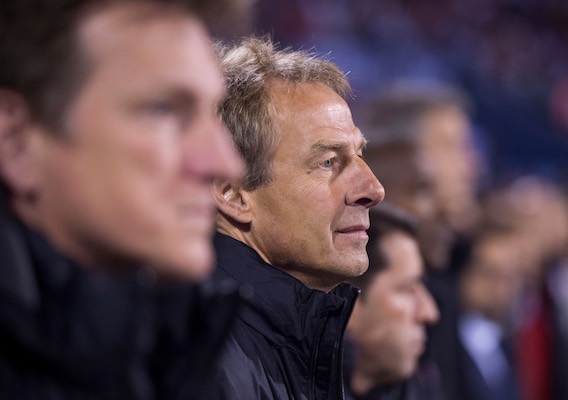 A disastrous start to the Hexagonal round of World Cup qualifying proved to be Jurgen Klinsmann's undoing. U.S. Soccer's Sunil Gulati today announced that the federation parted ways with the German.
BY Brian Sciaretta Posted
November 21, 2016
6:00 AM

U.S. SOCCER ANNOUNCED MONDAY that it had parted ways with embattled head coach Jurgen Klinsmann after a brutal start to the Hexagonal round of World Cup qualifying. No replacement has been named but it is believed that Bruce Arena is the leading contender.

"Today we made the difficult decision of parting ways with Jurgen Klinsmann, our head coach of the U.S. Men’s National Team and Technical Director," U.S. Soccer president Sunil Gulati said.

“We want to thank Jurgen for his hard work and commitment during these last five years. He took pride in having the responsibility of steering the program, and there were considerable achievements along the way. Many are aware of the historic victories, including leading us out of the Group of Death to the Round of 16 in the 2014 FIFA World Cup, but there were also lesser publicized efforts behind the scenes. He challenged everyone in the U.S. Soccer community to think about things in new ways, and thanks to his efforts we have grown as an organization and expect there will be benefits from his work for years to come.

"While we remain confident that we have quality players to help us advance to Russia 2018, the form and growth of the team up to this point left us convinced that we need to go in a different direction. With the next qualifying match in late March, we have several months to refocus the group and determine the best way forward to ensure a successful journey to qualify for our eighth-consecutive World Cup. There has never been a greater time for soccer in this country, and with the support and efforts of the millions of fans, sponsors, media and friends, we look forward to continued progress in the game we all love.”

Klinsmann’s reign as the national team coach had many peaks and valleys. At the 2014 World Cup, the United States was on its heels throughout the tournament but found a way to advance out of a tricky group that featured Ghana, Portugal, and Germany. It also won the 2013 Gold Cup thanks to a standout performance from Landon Donovan—his final major international achievement. The U.S. also advanced to the quarterfinals of the 2016 Copa America Centenario with wins over Costa Rica, Paraguay, and Ecuador.

But too often Klinsmann’s teams would be met with erratic play and questionable decision making from the coaching staff. The team struggled in the first round of World Cup qualifying for the 2014 World Cup and needed a come from behind victory over Guatemala to advance to the Hex. Klinsmann then faced a wave of criticism on his decision to drop Landon Donovan from the World Cup team behind Brad Davis, Julian Green, and others. He also failed to take a backup for Jozy Altidore to Brazil and following the tournament Aron Johannsson admitted he was not 100% for the World Cup.

Things began to unravel following the 2014 World Cup and the 2015 Gold Cup proved to be a disaster for the U.S., which lost to Jamaica and Panama en route to a fourth place finish. During that tournament, the Americans were heavily outshot by teams like Honduras, Haiti, and Panama.

But the start of the Hexagonal was the final straw as Klinsmann elected to use an odd formation to open against Mexico which proved to be fatal. Then against Costa Rica, it lost 4-0 in a game where the players appeared to either give up or simply be overwhelmed by the moment. In the following days, Klinsmann would show a combative side towards his critics calling them disrespectful and unhelpful towards building the team. He also said much of the criticism came from those who were unfamiliar with the sport.

That bitter departure only made it seem as if it was a matter of time before a change was made. On Monday it became official. Now the next manager will have to pick up the pieces an forge a way to build a team for an uphill qualifying campaign and towards Russia in 2018.

Share your take on this news below, soccer people. The Comments section is open for business.