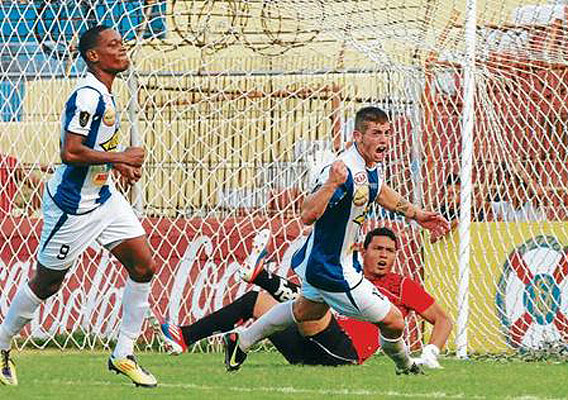 BY Brian Sciaretta Posted
September 26, 2013
5:55 PM
IT'S NEVER EASY for a young soccer player when he signs for a top club. While the quality of coaching is often high level, breaking into the first team can be difficult—and sometimes brief detours are needed before a player sees action with the senior squad. Such is the case for 20-year-old American forward Kevin Hoyos, who has played for Estudiantes de La Plata since he was 13 years old. A California native and the son of Argentine parents, Hoyos and his brother Michael moved to Argentina to join the legendary club which has won Argentina’s Primera Division six times and the Copa Libertadores four times—most recently in 2009. Hoyos could not force his way into Estudiantes' first team, and went on loan to Honduran club CD Victoria through the end of 2013. The interest from Victoria came about through one of the club’s Argentine players whose father was a youth coach at Estudiantes. Barely two weeks into his loan Hoyos has already shown his ability, scoring four goals in his first three games, including one in the CONCACAF Champions League. “The team needed a forward so I just wanted to come here, play, and see what happens," Hoyos told American Soccer Now. "It’s a good level. It’s almost like the Mexican league. It’s good soccer. I will stay here until the end of the year.” CD Victoria is coming off a strong season in Honduras’ Liga Nacional, where it finished in second place behind perennial power Olimpia. The second place finish allowed it to participate in its first CONCACAF Champions League. During the off-season, however, several top players left and the club was shorthanded in its follow-up season. By the time Hoyos arrived, the club was already eliminated from the CONCACAF Champions League in group play. Still, Hoyos scored in his first game against Firpo and Victoria will conclude the tournament on Thursday in Mexico against Club Tijuana (10 p.m. Eastern). Hoyos will have many family and friends from California attending the game. Hoyos is excited for the opportunity to finally play first team soccer and hopes that his success with CD Victoria will open doors for him in the future. His overall goal is to break into Estudiantes when he returns in January, and he is confident in his ability to be part of their team. Either way, however, Hoyos believes the opportunity at Victoria will open doors regardless of his status at Estudiantes. “I was playing on the reserves at Estudiantes," he said. "I wasn’t getting my chance. They told me there was an opportunity in Honduras and I wanted to play first team football. It was a tough decision to leave Argentina because I was used to it. I was there for seven years.” “This was a good idea for me to get my career started,” he continued. “I still have lots of games here in Honduras. I know I can play at the first team at Estudiantes but I just haven’t been given the chance yet. Maybe when I get back I can play on the first team. If not, there are lots of possibilities—maybe in the United States or Europe.” It has been a tough road for Hoyos to finally find first team soccer, but it pales in comparison to the path of his older brother, Michael, who narrowly escaped tragedy in 2011. Michael Hoyos was a rising star in Argentina where he was a high-profile player for both Estudiantes and Argentina’s U-20 national team. He was even selected to join Argentina’s practice squad in South Africa for the 2010 World Cup. In March 2011, however, Michael Hoyos (who had only just recently become a father at the time) was in a very serious car accident and his career was in jeopardy. Over the next two years the elder Hoyos would rehab and work his way back to becoming a professional player again. Over the summer he left Estudiantes on loan to Greek Super League club OFI Crete where he is earning first-team minutes. For Kevin Hoyos, he insists that watching his older brother fight to return to professional soccer has inspired him along the way. “Thank God he can play soccer again,” Hoyos said of his brother. “He didn’t get the opportunity with Estudiantes so he went on loan in Greece. It was tough at first when he got into that accident. He was doing well and playing on the first team at Estudiantes. We’re so happy he is playing again. When he came back, I looked up to him. He inspired me because he worked really hard.” While Michael Hoyos played for Argentina at the youth level, Kevin is yet to play international soccer in official competitions. He regularly follows the U.S. national team and has watched Jurgen Klinsmann’s squad during its qualification. While both were teammates at Estudiantes for most of the past decade , Michael and Kevin Hoyos now play on separate continents finding their own paths in professional soccer. Kevin speaks regularly with Michael and both hope to be teammates again—perhaps even on the U.S. national team. “I would actually like to play for the U.S. national team,” Kevin Hoyos said. “That would be awesome. I watched the last game against Mexico where they won 2-0 and it is my top goal to play for them. I was talking to my brother in Greece and he was telling me he’d like to play for the United States. I am trying to do the best here and my brother is trying to do the best he can in Greece and we both want to try to make the U.S. national team.” Brian Sciaretta is a frequent American Soccer Now contributor and a member of the ASN 100 editorial panel. Follow him on Twitter.