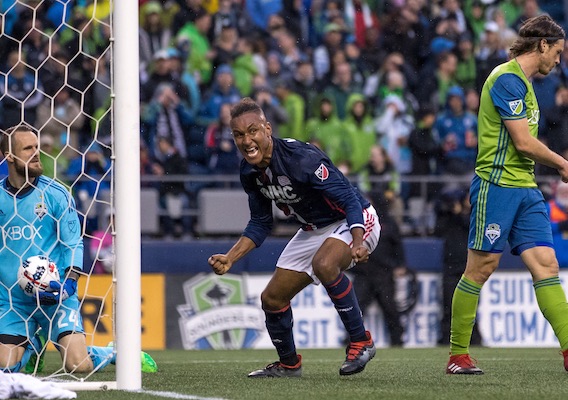 Juan Agudelo Wants to 'Put the Effing Ball in the Net'

The talented 24-year-old has played too pretty at times, and he knows it. That's why he decided to reinvent himself as a ruthless goal-scorer—a transformation that has paid dividends so far in 2017.
BY Franco Panizo Posted
May 05, 2017
10:30 AM

EVER SINCE coming onto the scene as a professional, Juan Agudelo has demonstrated a knack for scoring jaw-dropping golazos. There was a strong, outside-foot strike against the Seattle Sounders that opened his professional account back in 2011. There was a cheeky, flicked finish vs. the Chicago Fire two years later. There was even a stunning bicycle-kick effort at the expense of D.C. United in 2015.

Despire all his goal-scoring talents, Agudelo has flashed more style than substance during his career—more sexy than steady; flashy but inconsistent.

Until now, that is.

Agudelo is quietly off to the best start of his career, scoring six times for the New England Revolution in the opening two months of the MLS season. An extension of the way he ended last season, his impressive output in front of net has him tied for second in the league in goals right now and just three shy of his career high, which he set back in 2013 when he played for both the Revolution and Chivas USA.

The 24-year-old attacker’s uptick has not been some fluke or the result of scoring the bulk of his tallies in one match. Instead, the increased production is the result of the maturing Agudelo adopting a killer instinct that was previously missing from his game.

“For the first time in my career I’ve actually went in with the mentality of a goal-scorer and I feel like a goal-scorer now,” Agudelo told American Soccer Now. “Before, I used to be a player who I just wanted to create things. Just create things, dribbling or something, but now I see the ability of just concentrating on being a flat-out goal-scorer and what it does to help take away some pressure and win games.”

It might sound odd to hear a forward say he has only just discovered his nose for goal, but Agudelo has always been more of a dynamic facilitator than pure finisher—a player who likes to get on the ball just as much as he likes to shoot it. His superb technical qualities cater to him playing that way, even if he has shown on more than one occasion in his career how lethal he can be from inside the 18.

This year, Agudelo is not overdoing it. Whereas in seasons past he might have ruined a chance by taking one touch too many or attempting an extra cutback or stepover, he is now just letting it rip when he can. He is decisive in his choices in the final third, as evidenced by his second strike in a win against Minnesota United back in March.

Shoot first, live with the results is essentially his motto, and so far the aggressive approach is paying off for him and the Revolution.

“There was a stat last year or two years ago that said that I had the most touches as a striker inside the box, and now I look at that and I’m like, ‘Those are a lot of shots that I could have pulled off,’” said the six-foot-one Colombia native. “My goal is to have three shots a game, so I don’t think anymore when I’m in the box. Possibly if somebody else is open and it’s obvious, yes, I’ll play him the ball, but you’ve just got to pull the trigger because you’re not going to score any goals if you don’t take any shots.

“There are things that are good about being selfish. In the box, anything can happen and if you sort of take too many thoughts that go through your head you waste the opportunity.”

While adopting a killer instinct has played a role in Agudelo’s early-season success in 2017, so too has his January call-up to the U.S. national team. Agudelo was among the nearly three-dozen players summoned for Bruce Arena’s first camp back in charge of the program, and the experience of suiting up once again in the red, white, and blue lit a fire in the young striker.

Hungry to become a regular for the U.S., Agudelo entered the MLS preseason a determined and prepared player. Revolution head coach Jay Heaps noticed that immediately, and believes that attitude has allowed Agudelo to thrive.

“For Juan, it’s a focus. I think he’s been extremely focused this year from Day 1,” Heaps told ASN. “I think going to the national team was a positive in that he came in with us in the right place, right mindset, right fitness level so he could play at 100 percent.”

Agudelo is driven to help New England make the playoffs in 2017 but what he seems to yearn more than anything is to get back into the U.S. fold for good. He has been a part-time contributor over the last few years, and knows that he needs to continuously play at a high level for his club if he is to have a shot at consistently representing his country.

The good news for Agudelo is that Arena and U.S. assistant coach Pat Noonan have frequently communicated with Heaps over the past few months to check up on Agudelo's progress.

“The conversations that I’ve had with the staff is just making sure that Juan is consistent,” said Heaps. “That he’s bringing that level of performance, no matter where he is on the field, every time he steps on the pitch.”

Agudelo is dreaming both of helping the Americans reach the 2018 World Cup and playing in the tournament in part because he missed the cut for the 2014 edition. He has some work to do in order to muscle his way into a forward picture that includes Clint Dempsey, Jozy Altidore, Bobby Wood, and Jordan Morris, but Agudelo is dogged in his pursuit.

“After January, there hasn’t gone a day when I haven’t thought about the [national team],” said Agudelo. “A lot that I do is for the national team. Whenever I’m training, whenever I’m playing a game it’s focused on possibly getting another call back and being with the national team. I realize how many windows and doors it has opened for me in the past and I want to be back on it.

“I realize I’m 24 now. Weird to say, but I’m getting older because there’s only four World Cups that players can possibly play in, maybe three. It doesn’t come around that much, so I don’t want to miss out in my career and look back and watch the World Cup when I’m 45 and say, ‘I wish I went to a World Cup.’

If Agudelo can keep up his current level of play with the Revolution, earning another call-up should be a foregone conclusion. The upcoming World Cup Qualifiers in June might be a tad bit too soon to get a look, but July’s CONCACAF Gold Cup might provide the perfect opportunity to make a further impression.

For now, Agudelo has to concentrate simply on what he can control. That is, playing effectively and consistently for New England. Pulling off neat flicks and tricks in the process is a bonus, but certainly not a necessity.

“Before, I was possibly just trying to play pretty and just trying to look good while playing on the field, create chances,” said Agudelo. “But at the end of the day I’m a big, strong guy that has some speed and skill and for me to have the weight that I have and to be able to muscle some centerbacks, I need to just be a flat out goal-scorer.

“I sort of just think now to win some games you’ve just got to put the effing ball in the back of the net and that’s what I’ve been doing.”