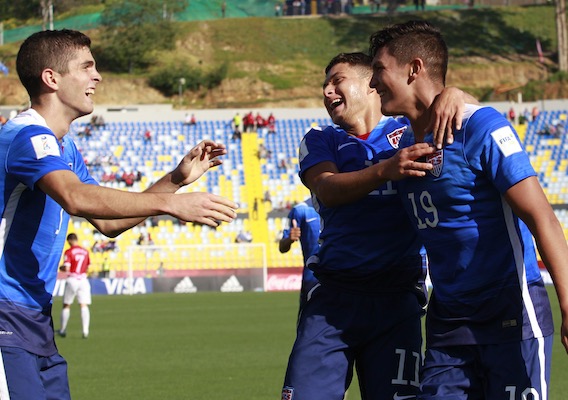 ASN's Brian Sciaretta spoke with the talented teen—and his famous uncle, Hugo—about his decision to play in Italy and how his game should grow in a soccer culture that produces so many great defenders.
BY Brian Sciaretta Posted
February 25, 2016
12:25 PM

FOR MANY AMERICAN PLAYERS, soccer runs in the family. Alejandro Bedoya's father and grandfather both played professionally in Colombia. United States U-20 forward Tommy Thompson’s father saw time with the United States national team. And the Bradleys, Michael and Bob, both remain active and relevant in the sport.

It's time to add another name to the list: Perez.

Joshua Perez, 18, is one of America's top teenage prospects and his uncle, Hugo Perez, was one of the most dominating American players of his generation. The professional soccer tradition extends back two generations, as Hugo's father and grandfather also played professionally in El Salvador.

Joshua is now following suit after inking a four-year deal with ACF Fiorentina earlier this month. The young attacker is part of a new generation of American players pursuing success in the top leagues of Europe.

It was several years ago when Perez attended a camp in California and scouts were there from various teams, including Fiorentina. The La Habra, Calif., native played well and the Italian club made a determined effort to sign him—even though it would take years due to his age and lack of a European passport.

The most interesting aspect of his signing is that for Perez, the product of a soccer family, he joined the club because they treated him like family.

“I guess at that moment I made a good impression and they invited me back over and over throughout the years,” Perez told American Soccer Now from Italy. “I went to different clubs as well but I made the final decision to stay here in Florence with Fiorentina because here, it's like family. They're very close to me and I've gotten to know them really well. They are taking good care of me.”

Family is important to Joshua, and his Uncle Hugo has been an important influence on his life and career. The elder Perez recalls the process that brought him over to Italy and has been particularly impressed with how well his nephew adjusted to life on and off the field—the latter of which can be a major hurdle for young Americans attempting to make the move abroad.

“When this first started four years ago, I had the chance to know some people from Fiorentina,” Hugo Perez recalled. “I told my brother to bring him to where I was. Obviously, Fiorentina people were there and they saw him and liked him.

"They took a chance with him but it wasn't something where they sign him and they like him, the thing they did was that they brought him over [regularly] to see if he could adjust to the life in Italy for himself. After that, they kept seeing that he was positive being there by himself. What I think is the most important thing, they felt the talent he had was enough to take a chance and develop him for the next three or four years until they could sign him.”

That signing came earlier this month after Perez celebrated his 18th birthday in January and the club finally acquired its long-coveted prospect. Perez now fills one of the club’s non-EU roster spots—an indication of how highly he is regarded within the club.

From 2013-2015 a number of high-profile American soccer players left European clubs and returned to play in Major League Soccer. Despite that trend, the number of American prospects signing abroad was increasing. It wasn’t simply midlevel prospects either. Rather, many of the top players developed in the United States were seeking to start their careers abroad.

Already it starting to bear fruit as Rubio Rubin, Christian Pulisic, Ethan Horvath, Emerson Hyndman, and Paul Arriola are among the many U.S. youth internationals playing for foreign clubs with several others also closing in on first-team minutes. Like those players, moving abroad was a top priority for Perez at this stage of his career.

“I never thought at one point that I would stay in the States,” Perez said. “I pushed myself to greater limits. I found this club and I actually made it. It was always Europe for me to play overseas.”

It hasn’t always been a smooth transition for many top players. Historically, the American-developed players who have found the most success in Europe began their careers in MLS. Moving abroad as a teenager wasn’t as much of a problem for Perez as the club had worked with him for years to prepare the move. As a result, homesickness was kept to a minimum as he became fluent in Italian and adapted to the culture.

“Over the years you kind of get used to it,” Perez said of his adjustment. “I kind of always depended on myself and became self-reliant. Missing home, missing family was a difficult part but over the years I kind of just got used to it. It's not a big issue. I do miss my family but I came here to do something that I love. They understand that. I have to adjust to the life I am living now.”

So far Perez is off to a strong start, playing right forward in a 4-3-3 formation for Fiorentina’s Primavera team. In his first three games he has scored twice and added two assists.

Unsurprisingly, Perez did have options in Europe as to where to begin his career, but Italy always felt right for him and the opportunity to shine in a system known for its defense had advantages.

“It's definitely a big difference compared with the other clubs I tried out for,” Perez explained. “Italian soccer itself is tough. It definitely just makes you think quicker and play in uncomfortable situations. For myself, I am able to adjust pretty quickly. I think that was a major thing I needed to have. I think the football here is fantastic. It's a tough environment that challenges you.

"For some reason, I love the pressure and challenging myself. Italians are known for having great defenders and the better the defenders, the better I get with the challenges. That is why I love being here.”

Hugo Perez agrees that his nephew is in a good situation. While Joshua lists one of his goals is to make his first-team debut with Fiorentina (which currently sits in third place in Serie A) in 2016, Hugo is slightly more cautious and emphasizes patience in that that Joshua has a long-term deal and is simply in a great situation to learn.

Still, the former U.S. international believes that Joshua has very good chance and that it is up to him in how he trains on a regular basis in Florence.

“For me playing against Italians and watching them, Serie A the hardest league to play for a young kid,” Hugo Perez stressed. “The first advantage he has is that they know him very well at the club. The second is that he's used to the culture and he speaks Italian….From Primavera to the first team is a big difference. I think if they bring him slowly and they continue to work with him at 18 years old, I think he has a chance. I know him. Leaving for Italy was the best thing for him.

"He has a chance to break into the first team but I don't know when because I am not there every day. Even if he doesn't soon, it's a great progress for him. It all depends on what he does every day.”

For now, Perez is simply happy with where he is at with Fiorentina now that he is cleared to play in games for the club. Internationally, he is looking forward to moving onto the U.S. U-20 team after being on a U.S. U-17 which disappointed at the 2015 World Cup. Sources have told ASN that U.S. Soccer is hoping to bring Perez into the U-20 for the Dallas Cup in March although Fiorentina is not required to release him.

Either way, the odds are good that Perez will factor into U.S. youth teams again sooner rather than later. Perhaps when he does, he will be closing in on first-team minutes and will join the ranks of a promising young generation of American players pushing to achieve success in Europe.