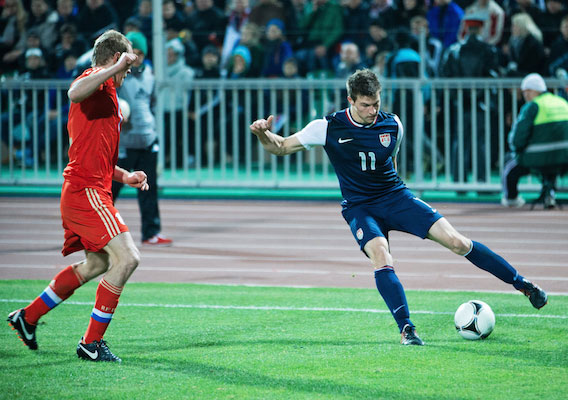 The 25-year-old returned to the pitch on Sunday after multiple knee injuries and years of frustration. Gatt spoke about his recovery, those who helped him, and his dream of playing in a World Cup.
BY Brian Sciaretta Posted
September 16, 2016
8:00 AM

IN THE 80TH MINUTE of Sunday’s scoreless draw between Molde and Haugesund, Joshua Gatt took the ball and blew past Haugesund defender Nemanja Tubic, drawing a red card when the Serbian made a late tackle. Five minutes later, Gatt received a pass near the sideline just inside the attacking half. He beat three defenders on a long run and drew a corner kick as his cross from close range was deflected out of play.

Three-and-a-half years ago, these type of plays were typical from Gatt—one of the most exciting and explosive young players in Norway, who helped Molde win its first two titles in its century-long history. Since then, however, the Michigan native has been through a brutal stretch of knee injuries that would have made many in his situation retire.

But on Sunday these moments served as a reminder of Gatt's potential, a glimpse at what the speedy winger can still be, and the reward for hard work and emotional toil.

Safe to say that @JoshuaGatt still has some pace about him.. pic.twitter.com/eKIEvSH7f1

“Most people believe that after three ACL tears in the same knee, you’re pretty much done,” Gatt told American Soccer Now from Norway. “There were times when I was angry and I was frustrated. I did feel cheated from my career and the opportunity to keep playing. These are all things I actually felt. But was a stronger feeling and a more important feeling was the support from my wife, my family, my coaches, and everyone.

"I felt, 'Yeah it sucks right now, but you can do it.' That's what kind of got me out of the dark pit of frustration and thinking, 'Why me?' to the point where I could move forward and put it all in the past. I am finally happy I got to the end of the tunnel.”

That dark road began in June of 2013 when Gatt first tore his ACL just days before he was slated to join the U.S. national team for the Gold Cup. He then reinjured that knee in preseason in 2014, missing the entire Norwegian campaign that year. Then Gatt made his long-awaited return on May 22, 2015, as a substitute against Mjøndalen. He tore his ACL yet again just five minutes after coming into the game.

Now 25, Gatt is in a better place. He recently married his fiancé whom he met back in Michigan while rehabbing from his first ACL injury. He credits her with having a huge impact on getting through the final surgery, the grueling rehab that followed, and away from retirement—which he admitted crossed his mind.

“The first time it was obvious that I would want to come back and play,” Gatt recalled. “The second time was a little bit harder. The third time was probably the hardest to make that decision. But I had a great support system around me to help make that decision in that I could make it back and I could do it. I did it and that that's all I wanted to do - I've only wanted to play soccer in my life. I wasn't ready to give it up because I hit a couple of huge speed bumps.”

Of course, his recovery was also aided heavily by two soccer icons, Ole Gunnar Solskjaer and Jurgen Klinsmann, who both coached Gatt and helped him at key moments during the lengthy process.

After high school, Gatt was initially set to attend Indiana University but elected to turn pro and sign with RSC Altach in the second tier of the Austrian system. He quickly proved to be beyond that level and was noticed by Solskjaer who was recently hired to manage Molde (which was also his first club as a player). There Gatt helped Solskjaer deliver Molde its first-ever titles, in 2011 and 2012.

While Gatt was injured, Solskjaer left to take a job with Cardiff City in January 2014. Following the 2015 season, Gatt’s contract with Molde expired and he was still a long way off from being able to play again. Molde had no head coach and was not offering new deals until a new coach was hired. Molde then made the decision to rehire Solskjaer who convinced the club to offer Gatt another one-year extension.

After a series of setbacks, Gatt finally received a bit of good luck in the return of a coach who helped him develop.

“The main reason I was able to get back into Molde is because Ole came back,” Gatt said. “I think Molde would have offered me a contract without him but Ole brought me here first and trained me to be most of the player that I am right now. He's made me into a very good player and a good person. To have him there made the decision to go through this again and fight for it—it made it easier.”

"Joshua loves football more than anything else," Solskjaer said after the game against Haugesund. "I tried to calm him down. He would have played games three months ago. But now it is up to me and my physiotherapist to bring him back gently. Joshua is like, 'I am ready, I have to start.' And he's going to do that but we will have to see when. I will make sure his eagerness does not take over."

Klinsmann was also instrumental in helping Gatt return to the field. The German coach gave Gatt his first of two caps in November 2012 against Russia, just days after he won his second Norwegian title. According to Gatt, it was Klinsmann who steered him toward Dr. Prof. Stefan Hinterwimmer, who successfully performed his most recent surgery.

So thrilled for @JoshuaGatt after 3 tough years!! What a special day to be back on the field for @Molde_FK #USMNT https://t.co/zvTpO7l5FM

“My agent felt that the best thing to do would be to find a surgeon in Germany,” Gatt recalled. “My club was leaning toward having an operation in Norway. A lot was up in the air. Eventually I just kind of called Jurgen myself and asked him point blank, 'What do you think I should do?'

"He told me he wanted me to see this surgeon. He gave me the name and put me in contact with him. I started e-mailing with the doctor and within two weeks of meeting him, I was having surgery under him. My knee is great. I've had no issues. I am so happy I went to him. Even going into this surgery he was so confident that he could make me play again.”

Following the surgery, Gatt also spent a lot of time rehabbing in Germany at a facility Klinsmann recommended. Also training there were fellow U.S. internationals Joe Gyau, Terrence Boyd, and Aron Johannsson—all of whom were trying to overcome serious injuries.

The opportunity to train with other Americans in similar situations added as extra motivation for Gatt.

“These are all things where people said we’d never bounce back from,” Gatt said. “That we were done. To be there together and work through this together, we motivated each other. We were all saying, 'If they can get through this, then I can get through this.’ We showed everybody we could beat this.”

Now back on the field, Gatt is feeling more gratitude for those that helped him as opposed to anger at the circumstances that have kept him away from soccer for more than three years. He feels particularly indebted to his club.

“Molde offered me a contract when they didn't have to,” Gatt stated. “Most teams would have said, 'Sorry.' They were willing to give me a chance to get back. They’ve been there through everything and I couldn’t appreciate them more for it.”

Then of course there is the U.S. national team, which remains a huge priority for Gatt. Like Solskjaer, Klinsmann has been a powerful ally for Gatt the past three years. Like he did with Molde, Gatt is hoping to pick up where he left off on the international front as well.

“The goal of mine ever since I was a little kid was to participate in a World Cup for my nation,” Gatt said. “I would love that. I will work as I can for Jurgen and the U.S. team if they choose me. I am just going to keep working as hard as I can so if or when the time comes, I will make a difference."