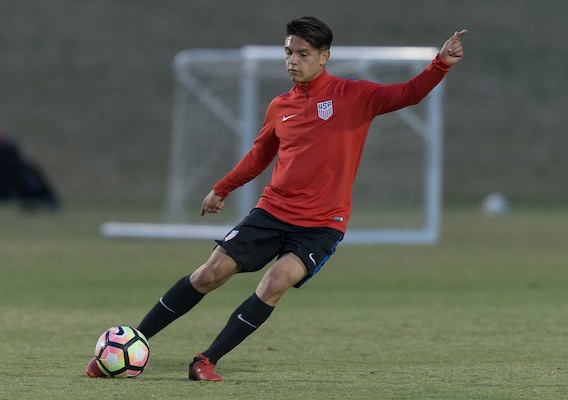 Jonathan Gonzalez, 18, off to Great Start with Monterrey

The Santa Rosa, Calif., native and U.S. U-20 midfielder made big strides during the Liga MX Apertura preseason and has worked his way into Monterrey's first team, earning three starts so far this season.
BY Brian Sciaretta Posted
July 31, 2017
8:00 AM

THE LIGA MX APERTURA is underway and the first two weeks have brought a promising story for Americans: United States U-20 midfielder Jonathan Gonzalez has not only made Monterrey’s first team but has also earned three starts.

Gonzalez, 18, has been with Monterrey since 2014 and has gradually progressed through the organization. A turning point, however, came this summer when he played very well in preseason, earning him a spot on the first team. So far he has played primarily as a box-to-box central midfielder but his versatility to play across the midfield, either on the wings or as a playmaker, gives head coach Antonio Mohamed several different options.

On July 21 he started Monterrey’s opening game, a scoreless draw against Morelia. Midweek, he went a full 90 in a 3-0 win over Celaya in Copa MX. On Saturday he started in a 1-0 win over Veracruz, although he was substituted out in the first half due to a tactical adjustment after a teammate was shown a red card.

“For being here three years, I feel like I've given all of me in that time,” Gonzalez told American Soccer Now from Mexico. “Unfortunately last preseason I pulled my groin and couldn't go to preseason with the team and I felt like that slowed me down a bit—knowing I was capable of competing with them. I also had a great preseason a couple weeks ago and I've been in top form so I think that's why I'm here right now.

“I wouldn't use the word nervous, more like anxious,” he added, referencing making his Liga MX debut against Morelia. “Yes the normal butterfly feelings in the warmup, but once the match started all of that was long gone. I felt like I had a solid match, nothing out of the ordinary, but a good one.”

A native of Santa Rosa, Calif., Gonzalez grew up a fan of both Liga MX and Spain’s La Liga but he was involved with U.S. youth national teams from an early age, including with the U-14 team when it was coached by Hugo Perez.

But a big break for him came when he enrolled at Alianza de Futbol which hosts several events that are aimed to showcase young Hispanic players in front of professional scouts. In recent years Alianza’s events have been well attended by scouts from teams in the United States and Mexico and several players have now been identified at Alianza events who have gone on to make their debuts in Liga MX. Gonzalez insists that Alianza played a “big role” and “opened the doors” in getting him to where he is today.

Gonzalez was one of the top players at Alianza in 2013 and he attracted the interest from just about every Liga MX team. One of the team’s interested was Chivas de Guadalajara which, along with Real Madrid, was one of Gonzalez’s favorite teams growing up.

But signing with Chivas would prevent him from playing for the United States due to the club’s long-standing policy of only signing players who are eligible and willing to play for Mexico on the international stage. So in the end Gonzalez opted for Monterrey, which has won Mexico’s top flight four times, the Copa MX once, and the CONCACAF Champions League three times.

“At Alianza, we don’t develop players, we showcase them,” said Alianza’s Joaquin Escoto. “It’s really up to the player. He has earned everything. In 2013 he was a winner. Every Liga MX team invited him. He was one of the youngest players. He was definitely a standout. Every team was pretty aggressive to get him—especially Chivas and Monterrey. Chivas really wanted him but he wanted to play for the United States. So he went to Monterrey.

And Gonzalez will likely continue to get his chances with the United States. During the last U-20 cycle he impressed head coach Tab Ramos who named him to the World Cup qualifying team in February where he was the team’s youngest player at age 17. In that tournament, Gonzalez played in one game for the U-20 team that won the CONCACAF title for its first time.

While Gonzalez did not make the 2017 U-20 World Cup team, he is likely to be a big part of the U-20 team for the 2019 cycle which could potentially feature players such as Josh Sargent, Tyler Adams, Andrew Carleton, and Nick Taitague.

Given the promising start to his professional career, Gonzalez can’t wait for it to continue on the international level as well.

“It’s a great feeling being able to compete with such great players at such a high level competition like it is in World Cup qualifiers,” Gonzalez said. “Being under Tab Ramos is an honor because of all the experience and knowledge he has.

“Until this moment, the United States has always guided and been there for me so I feel like I have the need to be with them. I'd say for now I'd have to stick with the U.S. for all they've done for me. My family is supportive in whatever decisions I make so it makes it much easier for me. International play for me is once in a lifetime opportunities, not everybody gets the chance to play international soccer so I'm very fortunate for everything I've been through and hopefully will be going through.

“I feel like the next U-20 cycle is very promising and full of great talent.”