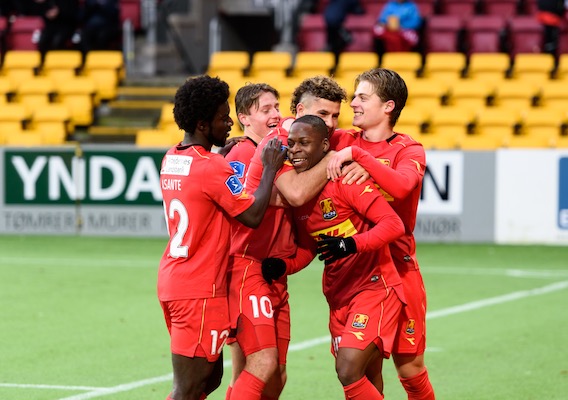 The South Carolina native played on a U.S. U-14 team with some big-time prospects and now he is earning rave reviews for his performances with FC Nordjaelland in the Danish Superliga.
BY Brian Sciaretta Posted
December 05, 2017
5:00 AM

FIRST THERE WAS Christian Pulisic. Then there was Weston Mckennie, Tyler Adams, and Jonathan Gonazlez. Now there is Jonathan Amon who is the next American teenager emerging after earning rave reviews for his Superliga performances for FC Nordjaelland.

Amon’s story as a young professional player is both unique and interesting. He has taken a different journey than most Americans who have made the jump to Europe to start their careers. But the end result is that Nordsjaelland now has a prospect it believes will have a tremendous upside—and potentially a huge sale price.

Over the past three games, Amon has been a standout as the club’s left-winger. On November 19, Amon came off the bench in the second half and promptly drew a penalty against league-leading Brondby. The following week he earned his first professional start and scored his first goal in a 6-0 win over Horsens.

This past Sunday, on the road against defending champions FC Copenhagen, Amon started and made the play of the game when he got into a 1v1 with Copenhagaen’s Peter Ankersen, a Danish international who recently played in both legs of the World Cup playoff win over Ireland. Amon easily beat him off the dribble to set up Emiliano Marcondes for a goal and Nordsjaelland would leave with an impressive 3-1 win and a firm grip on third place in the Superliga.

"This is what I love to see—a 'street player' who challenges when he has the ball no matter who is in front of him,” said Nordsjaelland head coach Kasper Hjulmand told the media after the win over Copenhagen. “I do not think he knows the opponents. He just drives on as it was in the schoolyard. He can beat a man in a phone booth and I just love seeing the playful, immediate and somewhat innocent way it's done. He is insanely [good]. Of course, Jonathan still lack a lot, but I see a super potential, which I'm looking forward to working on.

"You can see the immediate and the intuitive player who can [attack] with his extreme speed,” Hjulmand later told Bold. “He is a dribbler and how many dribbles are there in Danish football? He has something refreshing in his game."

A native of Charleston, S.C., Amon is new to the attention he is receiving and is quick to praise his coaching staff and teammates who have helped him make the transition from the youth ranks to the first team in Denmark.

“All the coaches are helping me and I haven't done it alone,” Amon told American Soccer Now from Denmark. “It's been great. It was a great feeling and I've never felt anything like that before. Scoring your first goal is a big deal. It gives you a lot of motivation because once you get one, you know you can do it. It's really motivating. We also have some really experienced players and they help me too. It's really good to be honest because it's a young team. They've been in the same position I've been in. They know how it is. Everyone helps everyone. I have a good connection with everyone.”

But Amon’s rapid rise at Nordsjaelland is not what makes him unique because he is far from the first young American to move to Europe and impress. What is surprising, however, is how he was discovered and how the club kept him under the radar until he turned 18.

When he was a very young player, Amon was a standout with local clubs such as Summerville Soccer Club and South Carolina United Battery, receiving call-ups to the U.S. U-14 national team under Hugo Perez. At that time he was also attending the Global Football School in Charleston. While watching him play in South Carolina, a Danish scout convinced Amon to attend a boarding school in Copenhagen called the Kies School, which is noted for its sports programs in handball and soccer.

While practicing at Kies, he quickly caught the eye of a FC Nordsjaelland rep whose U-19 coach also worked at the school. According to Hjulmand, the coach immediately noticed Amon’s talent and called Nordsjaelland's front office to notify them. From there, Amon began to informally practice with the team outside of school.

But Amon was 15 at the time and could not sign a pro contract with a foreign team until he turned 18. To help avoid him being discovered by other clubs, Nordsjaelland tried to limit his playing time and even went so far as to send Amon to play with the club’s academy in Africa.

"We've kept him hidden a little because he had to turn 18 before we could do anything about him,” Hjulmand said. “He played a reserve game in Lyngby and was absolutely outstanding. It meant that we had to hide him away again. We did not let him play too much so people would not see him. So we have spent a couple of years training him, and he has also been at the academy in Ghana for four months.”

Amon officially signed his contract earlier this year that runs through 2020 and with that he was able to begin playing official games. So far he has not disappointed. After playing well for Nordsjaelland’s youth teams, the breaking point came when he scored four goals against Randers’ U-19 team; the club decided he was ready for the first team.

For Amon, journey has been rewarding but it has also been difficult at times even when compared with other American teenagers who have made the jump. He was one of the youngest to move abroad and did so alone, without family. As the son of a Nigerian father and an American mother, Amon discussed the matter at length before making the jump.

“It's not easy,” Amon said. “I only see my family twice a year. In the beginning it is very tough. You get homesick, I guess. You try to focus on football and think about your goals and future. I thought about my dreams. That helped me a lot. I just want to play football at the highest level I can and Denmark is a very high level. It was a great opportunity.”

With his sudden rise at Nordsjaelland, Amon could also be building a strong case to make an ascent internationally with the United States. While he used to play for the U-14 national team, he quickly fell off the radar after he moved abroad and was playing few games for Nordsjaelland.

Amon admits that he does not keep in touch with any of his former U-14 teammates, which included standout players such as Jonathan Gonzalez, Nick Taitague, Tyler Adams, Tim Weah, and Ben Lederman but he could be reunited with them again soon for the U-20 team which will assemble soon as part of the 2019 U-20 World Cup cycle.

“With my first U-14 camps, he was part of that cycle,” said current Sporting Lokeren and U.S. U-18 midfielder Juan Pablo Torres. “I knew him pretty well. He's a really nice guy and a fantastic player. I remember how fast and quick he was. His ability to take people 1v1 was outstanding. Then there was a period I didn't hear much from him but then I saw on Twitter he signed for Nordsjaelland. Then I saw he made a start and scored a really nice goal he scored. That was awesome. The [U-20] team is going to be very strong.

"There's is going to be a lot of fantastic players and a lot of competition.”

Amon is very reluctant to talk about international soccer after having been away from the United States for so long. Instead, he prefers to take a cautious approach when talking about it. But no matter what, big things are in store for him sooner than later.

“I just want to get better and we'll see down the road,” Amon said about playing for the United States. “It's just about improving. You can say it's a lot of people's dream to play for their country. You do think about it in the back of your head. I am just focused on getting more playing time here and then we'll see what happens.”