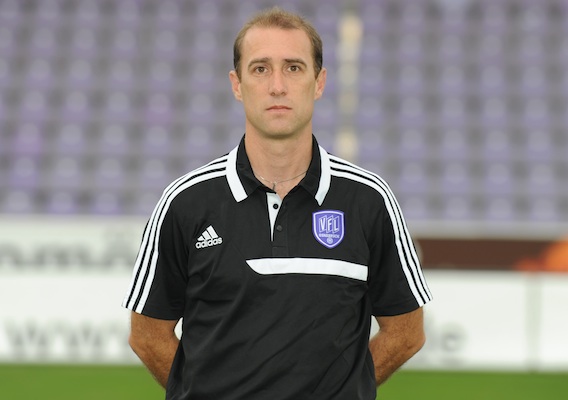 The 44-year-old California native made 359 league appearances with Osnabruck during his playing days and is now head coach of the 3.Bundesliga club. Brian Sciaretta spoke with Enochs about the role.
BY Brian Sciaretta Posted
October 02, 2015
4:00 PM

IF YOU ARE LOOKING for one of the best feel-good soccer stories featuring Americans in Europe, turn to northwestern Germany. There, in a small valley city, American coach Joe Enochs hopes to lead the revival of the club he represented for more than a decade.

A handful of American players have established tight bonds with European clubs over the years. Brian McBride left a lasting mark at Fulham—the pub inside Craven Cottage is named in his honor. Steve Cherundolo earned himself the nickname “Mayor of Hannover” after playing his entire career for Die Roten and, now a youth coach, he shows no signs of leaving the club anytime soon. Tim Howard also enjoys a tremendous relationship with Everton fans.

And yet the bond between Joe Enochs and VfL Osnabruck might be stronger than any of those. After graduating in 1992 from Sacramento State (now Cal State Sacramento), where he starred on the soccer team, Enochs continued his career with the semiprofessional San Francisco United All Blacks.

In 1994 Enochs made a substantial jump, moving to the German side FC St. Pauli with the help of a college teammate. After one year with St. Pauli’s reserve team, he then made the move to third-tier VfL Osnabruck, and has been affiliated with the club ever since.

Enochs, 44, retired as a player in 2008 after making a staggering 359 league appearances with Osnabruck, a statistic that certainly contributes to his status as one of the most popular players in a club that dates back to the 19th century. Upon retirement Enochs remained with the club in its front office and youth-coaching ranks.

In 2011, he was named the interim head coach during the club’s failed attempt to remain in the 2.Bundesliga, but did not yet possess the necessary coaching licensing to maintain the job.

This season Osnabruck again began poorly, registering two losses and two draws in its first four matches. Head coach Maik Walpurgis was fired before game No. 5 and the front office again turned to Enochs on an interim basis. The team responded well, winning its first two games under the American. Enochs, who had since acquired the necessary coaching license, was then named coach without the “interim” tag.

In a wide-ranging interview with American Soccer Now, Enochs spoke about his plans to help the 12th-place club get back on track. The interview below has been lightly edited.

BRIAN SCIARETTA FOR ASN: What were your initial reactions to getting the head coach job?

JOE ENOCHS: It was a big surprise, to tell you the truth. The club even approached me and asked me to do it. I’ve been with the club almost 20 years. You try and get better at what you do every day. That’s what I’ve been trying to do. I really appreciate the club supporting me and giving me the chance to do this. Obviously if we wouldn’t have gotten those two key wins, over Energie Cottbus and Holstein Kiel, it might have been a different story. So you need a little luck as well.

ASN: Now that it is your job, what is your vision for this club? What plans do you want to implement?

ENOCHS: The vision of the club is to give young kids in Osnabruck a chance to play professional soccer and to have a tight relationship with the city, the people, the fans, and the sponsors. We’ve gotten away from that a little bit. We’ve had a tendency to bring in external players to Osnabruck. Obviously you can’t just do it with Osnabruck-based players or youth players, but you need to integrate them because the identification from those kids with the club is amazing.

I think that’s what we need to do for three separate reasons. First it saves some money because they’re less expensive. Second, it raises the identification of the club. Third, it gains sponsors because the sponsors really support the youth system. That’s what I came in here to do. But it’s going to be a long road. We’re not strong enough in the youth system to input three or four players at a time. You need to do it slowly. That’s my vision for the club.

ASN: What is it going to take to get back to the 2.Bundesliga? Is that a realistic short-term goal for the club?

ENOCHS: Right now, it’s just about getting to the point where we are in a safe position, to where we can be within reach of the teams at the top of the table. It would be a little unfair of me to ask the team to say our vision is to go up to the 2.Bundesliga after this season. We’ve had some injuries, and we’ve let some players go that maybe I would have liked to keep.

I think this season we just need make sure we’re getting enough wins to make sure we’re in contact with the top of the table. Then, next season, I think we have a realistic chance to be near the top of the table. You know how it is. If we say that we want to move up to the 2.Bundesliga at the end of next season, you’re putting the team, the coach, and the whole club under a lot of pressure. In the third year, we want to be able to go up.

ASN: You’re one of very few American-born-and-raised head coaches in Europe—does that mean anything to you? Do you think there is a stigma against American coaches in Germany or Europe in general?

ENOCHS: It’s an honor. Obviously there are a lot of good coaches here in Germany, and there are a lot of good coaches all over the world. But going through the coaching licensing where I got my UEFA pro license in 2014, I think I’ve been able to convince top coaches here in Germany that I’m a good coach. The man who runs the coaching licensing here, we had some great talks, and he’s convinced that I am a very good coach with attention to details. I’ve got my own style of coaching.

Here in Osnabruck it is not that difficult for me because I am looked at as an Osnabrucker, and they have accepted me as part of the club. That’s not very difficult. Now throughout Germany, I think there is a little stigma. The best chance I had to become a professional coach was in Osnabruck—but now I have to prove myself. If I prove myself, everything is fun.

ASN: I know you only recently took on this job, but do you have any long-term ambitions to return to the United States to coach either in MLS, with youth teams, or within U.S, Soccer? You are earning coaching experience that few other Americans have.

ENOCHS: I would love to. That’s one of my dreams—to come back to the United States and help out using some of the experiences I have had in Germany. These coaching licenses and the UEFA pro license—I was in with French internationals and German internationals. Just the experiences I gained there, I would love use that experience and help with players and clubs in the United States. It would be a win-win situation.

I have talked with Gregg Berhalter every once in a while. I really respect what he’s done, and I could imagine myself being in a similar situation. He was similar player to myself. He always gave it his all. He took responsibility on the field. I look at him sort of as a mentor. I am really, really happy with my situation at Osnabruck now. I have a lot of work in front of me, but who knows what could happen in the next few years?

ASN: How closely are you involved with soccer in the United States these days? Have you ever spoken with Jurgen Klinsmann? Do you follow Major League Soccer?

ENOCHS: I’ve never spoken with Jurgen Klinsmann, but I do follow MLS. We get some games here in Germany, and I watch it once in a while. I try to follow as closely as possible but to tell the truth it’s been very difficult because I’ve been so concentrated on getting my foot in the door here in Germany.

ASN: What has surprised you the most about coaching in Germany that maybe you never knew as a player in Germany or as a youth player in the United States?

ENOCHS: I have a difficult time saying some things are better here in Germany compared with the United States because I don’t really have any experience in the U.S. right now. The thing that was really mind-blowing for me when I was doing the coaching course was how structured it is. It took soccer down to the finest detail and broke it down to make it simple for us coaches. And it helped us figure out what is going wrong in the game.

There is not one soccer philosophy. In the coaching course, they told you to find your own philosophy. There is no German way, Spanish way, or Brazilian way—it’s your own way. Find out why it is not working and break it down into small pieces and coach the details. It was so structured, and they gave you so much information that you need. It really prepared me for taking over the head coaching job here. It’s still difficult, and it can be really stressful at times, but I felt really prepared.

The first time I took the job, in 2011, I was overwhelmed. Now I feel prepared to be the coach.

ASN: How does a Joe Enochs-coached team play?

ENOCHS: What I really like is to circulate the ball. But I also love to go forward as fast as possible. I want a good mixture of ball control and going to goal. I like to play the ball flat through the midfield—change the side of the field but also to be dangerous inside the box. I love a lot of action inside the box. I also love transition from offense to defense and defense to offense. As soon as you lose the ball, that’s when your work starts. That’s when you work your hardest.

I also think one of my hallmarks is that I treat my players like people—because that’s who they are. That’s one of my strengths.

ASN: As a player, you earned one cap for the U.S. national team. Do you still follow the team? With Klinsmann as the team’s coach and several players coming up through the German system, the U.S. team must be more visible in Germany now than ever before.

ENOCHS: I earned one cap and I am so proud of that. Of course I still follow the team. Ever since there has been this huge influence of German soccer, I’ve followed it more closely. I think the United States is doing a great job. They’re starting to get the structure that they need. I watched the Gold Cup where they lost to Jamaica, and that’s unfortunate, but those things are going to happen. I think we’re on the right path with the academies coming up now for the youth systems. We’re going to be a force to be reckoned with in the future. I am really happy to see we’re on the right path.