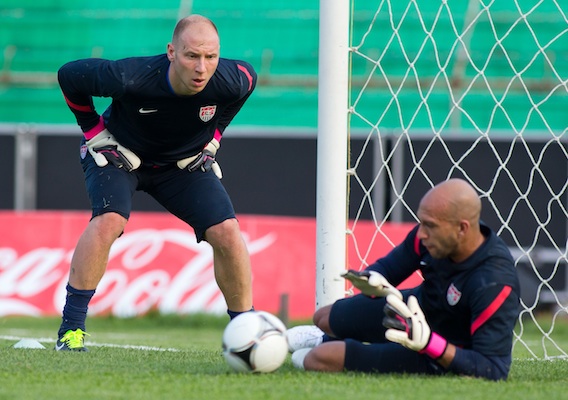 It's Time for Plan B, as in Brad Guzan in Goal

Tim Howard's back injury almost certainly means that the United States' No. 2, Brad Guzan, will be in goal when the Americans face Costa Rica and Mexico later this month. Is Guzan ready? Jon Arnold explores.
ASN Slideshow

BY Jon Arnold Posted
March 09, 2013
8:59 AM
Editor's note: Click on the ASN Slideshow at right for a guided tour through Brad Guzan's career. Tim Howard has saved the U.S. from World Cup qualifying disasters time after time. But he won't be able to help when the Yanks take on Costa Rica and Mexico later this month. Barring a miraculous recovery from two broken bones in his back, Howard, America's No. 1 goalkeeper, will miss both matches. The U.S. Soccer Federation told ASN it is still gathering information about the situation, but it’s safe to say it’s time to start preparing Plan B. B as in Brad. Brad Guzan. How comfortable American fans feel deploying a plan without the reliable Howard in net depends on the level of trust they place in the U.S. No. 2, Aston Villa keeper Brad Guzan. Guzan has developed into a remarkable keeper since he left Major League Soccer in 2008 for the greener pastures of the English midlands. This has been a breakout season for the 28-year-old, whose performances have kept Premier League mainstay Shay Given on the Villa bench. It seems odd to praise the keeper of a team that has allowed the third-most goals in the league this year—53 as of this writing. Yet those who have watched the relegation candidates know it could be much worse without Guzan in goal. Guzan's value also becomes evident when comparing his Premier League stats with Howard’s. As ESPN's Paul Carr shows, the keepers’ stats are very similar, except that Guzan has had to make 26 more saves than Howard despite playing one fewer match. It speaks to both how well Guzan has performed this season and how dreadful Villa has been. What separates Guzan from Howard? For one, his distribution is actually better. Guzan’s completed pass percentage typically hovers in the 70 percent range, with his goal kicks generally going up the middle and finding a teammate. This statistic fits in nicely with Jurgen Klinsmann's oft-stated goal of building possession out of the back and into the attack. Guzan also has become accustomed to forgetting about, and moving on, from the goals he has allowed—a must for a goalkeeper whose team was outscored 15-0 in a three-match period. He appears to communicate well with young defenders on the pitch after they’ve made a mistake or when they need to make an adjustment, even if he’s not always as animated as Howard after a big save. Aside from vociferous clapping and a decent Premier League team, one thing Howard has that Guzan lacks is national team experience. The 28-year-old has seen just 19 minutes of action under Klinsmann, and that came as one of six subs in a 5-1 friendly win against Scotland in May 2012. Guzan did see some time in a national team shirt several years ago. Five of his 20 caps came in 2010 World Cup qualifying, where he earned a 3-1-1 record. In fact, the then-Chivas USA man played and won a World Cup Qualifer at the site of this year’s home qualifier against Costa Rica. He was also in goal for the United States' 2-0 result against Guatemala in November 2008 at Dick’s Sporting Goods Park outside Denver. In addition to his qualifier experience, Guzan was in goal for the United States’ win against Egypt in the 2009 Confederations Cup, and he had additional success in South Africa when he captained the team in the Nelson Mandela Challenge the following year. The national team picture has obviously changed drastically since those matches, but Guzan hasn’t exactly been an outsider. Klinsmann has included him in multiple camps, and the Chicago native is widely considered the second-best American keeper. With the U.S. defense struggling for consistency heading into this set of qualifiers, Guzan’s familiarity with playing behind a less-than-stellar back line will be useful. There’s a reason America has a reputation for producing good goalkeepers; it’s a reputation earned and borne out for decades now. If there’s any position where the national team can afford an injury, even to a stalwart like Howard, it’s in goal. Should there be another unfortunate injury or if Klinsmann just wants to explore his options there are a half-dozen MLS goalkeepers plus a handful of Europe-based guys who are perfectly reasonable options in goal. With that said, Guzan is ready and capable of taking matters into his puffy-gloved hands.