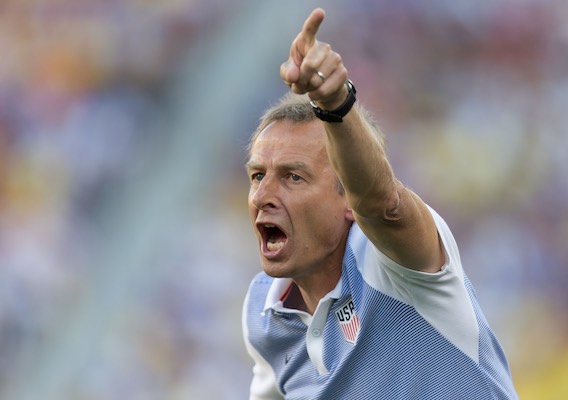 Is Jurgen Klinsmann in Denial Over Colombia Loss?

There's no shame in losing to the No. 3-ranked team in the world, but the U.S. men's national team coach could not bring himself to admit that the Colombians were the better team Friday night.
BY John Godfrey Posted
June 04, 2016
8:40 PM

SANTA CLARA, Calif.—Did the U.S. men's national team go toe-to-toe with one of soccer's powerhouse teams and only end up on the losing end because of a referee's questionable call just before intermission?

Or was Colombia always in control of this Copa America Centenario opener, toying with a rugged, committed American side that had few ideas in the attacking third of the field?

The answer, it seems, depends on whom you ask.

Jurgen Klinsmann made it very clear that he considers the U.S. unlucky to have lost Friday night at Levi's Stadium.

"Overall I was very pleased with the performance," Klinsmann said. "The message overall is positive to the players even if they are obviously disappointed that we didn’t get any points.

"We had a totally even game here."

Reasonable people can disagree, but the U.S. coach's perspective does not seem to account for the fact that his side did not manage a single shot on goal in the opening 45 minutes, and only made Colombian goalkeeper David Ospina stop two shots the entire game. U.S. backstop Brad Guzan, on the other hand, faced eight shots that were on target—and several required saves of the spectacular variety.

Colombia's esteemed coach, Jose Pekerman, also saw the game a bit differently than Klinsmann: "The United States are a competitive team," he said after the match, "but we could have scored a couple more."

National team icon Landon Donovan did not hesitate to give his two cents on the performance, and clearly sided with Pekerman.

Ugly opening game from #USMNT tonight. Still two games to get it right and advance. Need a much better performance against Costa Rica.

Clearly, the Yanks gave it their all. The team played hard, did not shy away from challenges, and demonstrated a commitment to compete that was admirable. But to suggest that the two sides were "equal" over the course of 90 minutes defies reason.

Asked if he felt good about his backline, Klinsmann had nothing but superlatives: "Oh definitely. We didn’t give them any chances until the end when there was some counter-breaks because we were pushing forward. It was an outstanding backline."

Given multiple opportunities to concede to the Colombians, Klinsmann did not budge.

"We were very compact," he said. "We were technically very well organized. And we played them even. We had no problem at all when they went one-nil up. We kept playing, and kept the rhythm, and pushed forward.

"That team is No. 3 in the world? Well, we can play with them. We can damage them—which didn’t happen today but maybe next time."

Nevermind that Colombia took an early first-half lead and put an exclamation mark on it right before the half. Or rather, do mind. Klinsmann implied, repeatedly, that Colombia was fortunate to win the game.

"Obviously the penalty decision was a major point in this game," Klinsmann said. "But it is what it is. You cannot change it anymore. He gave the penalty. He didn’t give any in the second half on Clint. But that’s the referee’s decision."

Klinsmann's players did not necessarily view the game, and the result, in the same light as their coach.

Jermaine Jones called it a "tough game," but also acknowledged that the Yanks "were always a step too late."

The veteran midfielder did not seem overly enthusiastic about the team's defense-first game plan, either.

"I was not happy why I have to make more defense and protect Fabian [Johnson] on the left side," he said. "That’s what the coaches wanted, that I don’t go so much forward and stay home. I like it more to play forward and today it was not the case. I have to do what the coach wants."

"In the first half there were some good moments," Bradley said. "We weren’t quite sharp enough, or played good enough, to take some little advantages or half-chances and really punish them. They, on the night, were ruthless in terms of their ability to know what the game was going to need. Close space and make things very difficult and take chances when they can."

Colombia's ability to capitalize on an early corner kick, Bradley suggested, was not an anomaly but rather an indicator of quality.

"It’s the beginning of the game, teams are going to do anything they can to get a little advantage," he said. "Obviously they ran a little play where the game off and they set a little pick—this is what happens on set pieces. At times you’re able to fight through it and take care of it. At times the attacking team is good enough to score. Today we were on the wrong end of that."

DeAndre Yedlin, who was given a penalty on the decisive play of the game, also acknowledged that Colombia did what it had to do to win.

"We were trying to shut them down," he said. "Overall we did a pretty good job of that. I think we’re right there. Mistakes need to be cut out but I think we can play with the best teams in the world."

Geoff Cameron, who lost his marker on Colombia's first goal, spoke to reporters after the match and took full ownership of his mistake.

"Right before [the goal] I was hugging the guy a little bit and the ref told me to put my hands down," he said. "As soon as he told me, the play happened. So I’m a little frustrated with that. You’ve got to learn. I’ve dealt with it before. I’ll take the responsibility and get better.

"I put my head down for a second. I looked over to the left to look where the ball was and all of a sudden…"

That early score set the tone for the rest of the match, and after Colombia scored on the penalty it shrewdly played circumstances to its advantage.

"When they went up two they kind of sat back, like any team would," Cameron said. "It was a little hard to break down. We did show some good things. I think we’re playing better soccer than we have in a long time. Guys are moving off one another. We’re creating good things. I think it will come.

"They’re what—third or fourth in the world? I don’t think they played miles better than we did. It’s obviously disappointing and frustrating because things were there for the taking and you want to get into the tournament with momentum, but as a professional you have to shrug that off and keep positive. We have two more opportunities to win out. You can’t dwell on it and move on."

While his players readily admitted that Colombia possessed that extra bit of quality, Klinsmann defiantly rejected the notion that the better team won.

Toward the end of the post-game press conference, a reporter asked Klinsmann a two-part question: Did the coach think the two teams were on equal footing and did Colombia deserve the win?

Klinsmann said, "There was no difference between the two sides."

The reporter pressed the coach to answer the second part of his question: "Did Colombia deserve the victory?"

A testy and irritated Klinsmann replied, "I’ll leave it up to you."

Tell us what you think, soccer fans. Share your take in the Comments section below.