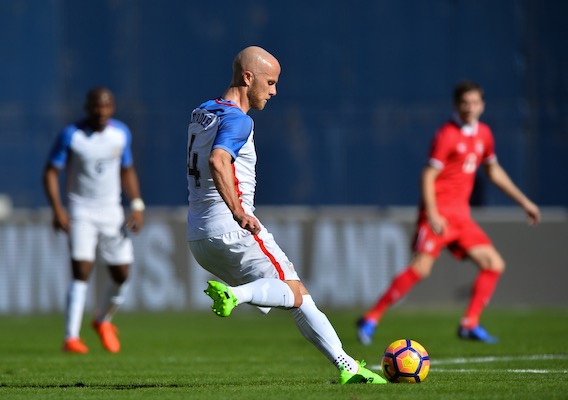 Is It Wrong to Expect Good Performances in January?

Playing at home in front of a new coach with the benefit of three weeks of training together, the U.S. men's national team should have beaten Serbia. Why isn't anybody particularly bothered by the result?
BY John Godfrey Posted
January 29, 2017
9:00 PM

SAN DIEGO—The U.S. men's national team took a total of 12 shots on goal Sunday afternoon against Serbia. It managed to get just one of those shots on frame.

An American squad consisting of the best talent from Major League Soccer squared off against Serbia's B team, a group of youngsters who had to fly halfway around the world to get to Qualcomm Stadium. The Americans managed just two corner kicks over 90 minutes while the visitors generated seven.

Bruce Arena's unit had practiced together for nearly three weeks—just up the road in Carson, Calif.—and yet needed a sprawling save from Nick Rimando in the 89th minute to salvage a tie against the 45th-ranked Serbians, a team that had been training together for just five days.

Pretty bad, right? The coach must be furious, don't you think? And the players must be beating themselves up about now, correct?

Why? Because it's January, and in American soccer circles that's a magical time when results and performances never matter. Mediocre is OK during this window, we've been trained to believe. They're just getting their work in, we're told over and over again.

The Gregorian calendar may say it's January but the only timekeeping device that matters is a countdown clock that clearly states there are just 53 days until an absolute must-win match against Honduras. You guys want to go to Russia in 2018? Then don't wait for March to start delivering. Do it now.

From my vantage point, there was a shortage of desperation on the field Sunday afternoon; there was none whatsoever after the contest.

"Clearly, we would have liked to have won the game today but I think for this time of year it was a good game," Bruce Arena said after the scoreless draw. "I was encouraged by a number of performances for our team."

"We continue to feel good about the progress we have made these few weeks and ultimately the result wasn't going to change that," Bradley offered. "This is about getting a group of guys back together and getting everybody going and starting to really have an idea, going forward, of what we need to be about."

Your turn, Alejandro Bedoya: "There were definitely some positive things. It felt all right. It was a good exercise."

In all fairness, most Americans played hard. The defenders and midfielders pressured the ball, at least in the first half. They strung a few passes together in the opening 20 minutes and had a few looks on goal. Darlington Nagbe could showes the potential to be a starter, Graham Zusi held his own at right back, and Sebastian Lletget played like somebody who could be a difference-maker.

But there wasn't much else to celebrate. Jozy Altidore commemorated his 100th U.S. appearance with a poor showing that seemed to prove he cannot play alone in a single-striker setup—he failed to find open spaces and might as well have stayed home. Bedoya was messy on the ball and didn't do enough defensively. Sacha Kljestan started strong but ran out of gas, or ideas, in the second half. Nagbe should have buried his chances. Bradley was just OK.

"I'll be honest with you," Arena said. "If we won 5-0 today or lost 5-0, I'm not sure it would change our world for March. These games are important, especially for our domestic players, but the games that are going to count are in March. That's where you look at me and get really critical."

Actually, no. We're going to be critical now. The World Cup qualifying process insists we do.

Has Altidore ever performed well as a solitary striker? He has not. So why would he suddenly figure it out now?

"He's a No. 9 type of player," Arena said. "The key with Jozy is getting someone a little closer to him. That was Sacha's job today and Nagbe got close and was part of some combinations with him. We'll still look at Jozy playing with another striker as well but overall I thought it was a solid game.

"This time of year the attacking players are a little bit behind. They're just getting their fitness back—their touch and all of that. They trail a little bit, the other players. You could see that today."

Altidore is a skilled passer but he's just not a holdup player and he doesn't have the speed, or the guile, to create space for himself. He's a powerful opportunist and he absolutely needs a strike partner. Arena should have recognized that—either before Sunday's game or certainly 45 minutes into it.

"I thought the Serbian team defended very well," Arena added. "They did a real good job. It was a challenging game for us."

Yeah, maybe. But Honduras and certainly Panama four days later will be defending just as well, so crediting your opponent doesn't really hack it at this stage of qualifying. Tipping your cap to your opponent is a nice thing to do; raising hell with your charges tomorrow in training is the necessary thing to do.

And perhaps Arena will do just that. Maybe all of that feel-good spin was manufactured just to get past the media hordes so that some serious adjustments—both attitudinal and tactical—can occur on the practice field before the Jamaica game on Friday. Let's hope so.

Meanwhile, the coach may want to dissuade his players from blaming the field conditions in the coming week. The Yanks do play in CONCACAF, after all.

"No excuses," Bradley said, "but an afternoon kickoff and a choppy field both play into the difficulty of making a special play to break the game open."

"The condition of the field affected us a little bit in terms of moving the ball quick," Bedoya echoed a few minutes later.

Wrong answer. Even if it was true, don't say that. Rise above it. Find a way to overcome the pitch instead of using it as a crutch.

Of all the players I spoke to after the contest, only Sacha Kljestan seemed actively bothered by the result—but even he equivocated somewhat.

Relationships? Hope for a win? It all sounds so soft.

And qualifying for the World Cup, especially when you start out the Hexagonal with two losses, is hard.