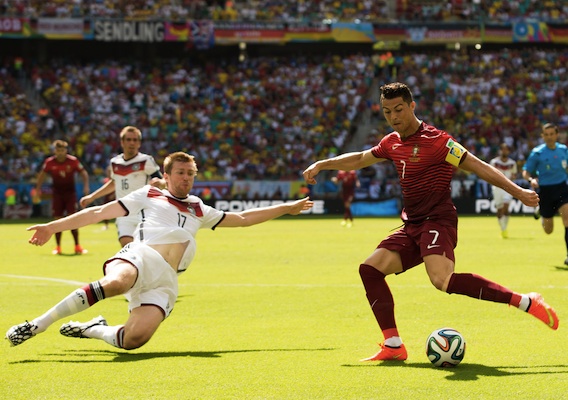 Is Cristiano Ronaldo Out for Portugal's Match with U.S.?

Jozy Altidore has a hamstring strain and could miss Sunday's match, but concerns about his status pale in comparison to the personnel problems facing Portugal. And yes: Cristiano Ronaldo is rumored to be out.
BY John Godfrey Posted
June 18, 2014
4:41 PM
SAO PAOLO—A light drizzle is starting to fall on this massive metropolis, transforming the already-overcast skies into a slightly darker shade of gray. If this level of precipitation represents the amount of bad news that the U.S. received in its 2-1 victory over Ghana—Jozy Altidore injured his hamstring and may miss the game; Clint Dempsey suffered a broken nose and likely will be hampered—Portugal is facing the meteorological equivalent of a monsoon. Let's take them in chronological order, shall we?

The Portuguese forward with the Brooklyn hipster mustache, Almeida is typically the second player mentioned when soccer aficionados insist that Portugal has more scoring threats than a certain Ballon d'Or winner. (Nani, a disappointment of late, is often the first.) And it's true—Almeida is a legitimate threat. Or rather, he was. The burly 30-year-old striker, who has 19 goals in 56 international appearances for Portugal, pulled up lame in the 28th minute of his team's humiliating 4-0 loss to Germany. According to a team doctor, Almeida's hamstring injury will cost him a minimum of 10 days, which means he will be on the sidelines for the U.S. match and against Ghana four days afterward. Helder Postiga, who plays his club soccer for Lazio, is a 31-year-old veteran and the likely replacement. Eder, 21, who has made just nine appearances for Portugal, could also see some action.

Sometimes a reputation for being a hothead is fully justified. For Pepe, the six-foot-two central defender who plays his club soccer for Real Madrid, it absolutely is.