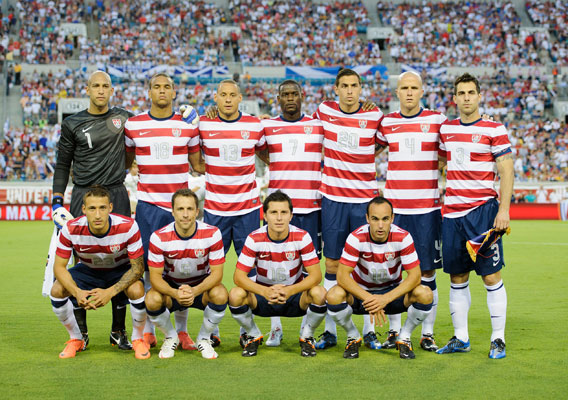 The ASN 100: Our Guide to America's Best Players

Ten soccer experts—including former U.S. national team players Alexi Lalas and Taylor Twellman—ranked the best American players from 1 to 100. Best of all, our list is highly interactive. Click inside to immerse yourself in the USMNT.
BY John Godfrey Posted
October 04, 2012
2:00 AM

Who is the better striker—Herculez Gomez or Terrence Boyd?

When is Omar Gonzalez going to get his shot with the U.S. national team?

How come Eric Lichaj is good enough to start for Aston Villa but can't get a call-up from Jurgen Klinsmann?

If you're reading this, chances are you've obsessed over these sorts of questions for years. You watch a ton of matches, you live and die with the U.S. national team, and you have strong, informed opinions about who deserves to be in the squad at any given point of time. Sound familiar? If so, we think you're going to love the ASN 100.

At its most basic level, the ASN 100 is a monthly ranking of the current U.S. national team player pool. We asked our panelists: If there were a crucial World Cup qualifier tomorrow, what would your extended depth chart look like? We aren't trying to read Klinsmann's mind or predict his selections. And we aren't projecting into the future or thinking about Brazil 2014. (We take the "now" part of AmericanSoccerNow.com very seriously.)

The results are posted here, and we hope you'll spend some time dissecting and debating the results. (We certainly did.) You can also interact with the rankings by clicking on the tabs at the top of the module. The interactive part is pretty cool.

Some of the more interesting rankings: Geoff Cameron's consistently strong play landed him at No. 7. Graham Zusi, on the uptick at the moment, is ranked 17th. Omar Gonzalez (no caps under Klinsmann) lands at No. 21, Chris Pontius (no caps at all) is 27th, and Chivas USA goalkeeper Dan Kennedy made it all the way to No. 37.

You're probably wondering who crafted these rankings. We would too. One of our panelists has requested anonymity for the time being. Here are the other nine: * Taylor Twellman (former U.S. player; ESPN analyst)
* Grant Wahl (Sports Illustrated; "The Beckham Experiment")


We could go on and on about the ASN 100, and perhaps at some point we will. But for now we encourage you to check it out and tell us what you think in the Comments section below.