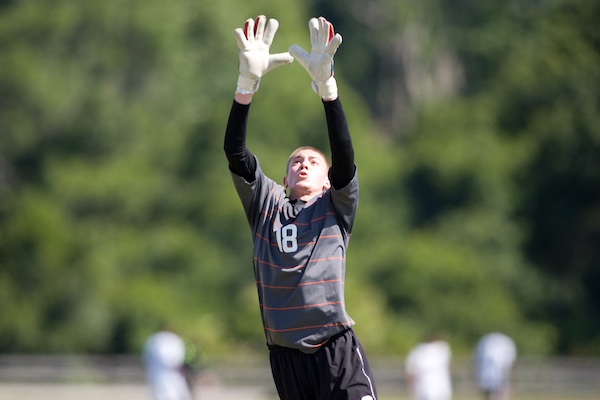 IN THE BRIEF HISTORY of modern American soccer, the position of goalkeeper has been an unquestionable strength with the likes of Tim Howard, Brad Friedel, and Kasey Keller having earned tremendous worldwide respect in a way most positional American players have struggled to match.

But despite the stellar performance of Zack Steffen at the U-20 World Cup and the United States senior national team call-ups for U-23 ‘keepers Cody Cropper and Alex Bono, it is actually another young American goalkeeper who is poised for the most significant breakthrough at the club level: Molde FK’s Colorado native Ethan Horvath.

Earlier this month, reigning Norwegian champions Molde sold starting keeper Orjan Nyland to Ingolstadt of the German Bundesliga. Nyland was a prized player for Molde FK as he was the Norwegian national team’s first choice ‘keeper and considered one of the best players in the Tippeligaen, Norway’s top flight.

One of the reasons Molde felt comfortable letting such a highly-regarded player go was because of the great strides the 20-year old Horvath has made and the Molde brass felt he was ready to step up and contribute to the first team.

So far Horvath has made four league appearances with three coming as starts. Friday, he started in Molde’s 1-0 loss to Haugesund, his first game since Nyland’s departure.

“I’m feeling very good. To be honest, I think the transition has been pretty easy because I think the guys on the team knew Orjan wanted to move on,” Hovath told American Soccer Now from Norway. “It helped early on the preseason that I got some games and I also got to play the first two games in the (Norewgian) cup. Then Orjan got hurt in a game early in the season and I got to play. It was important for me to play well in those game to show everybody and my teammates that if and when the time comes, I can handle everything.”

This week should mark the biggest moment in Horvath’s young career as he’s expected to start tomorrow for Molde in its Champions League qualifier against Pyunik, an Armenian team led by American forward Cesar Romero, who won the golden boot last season in Armenia’s Premier League.

While Keller, Friedel, Howard and Brad Guzan have all started in European competitions, none did it at such a young age. In fact, all but Howard were still college players when they were 20 while Howard was a back-up on the MetroStars.

As their spot in the Champions League qualifier implies, Molde is one of Norway’s top teams. Since 2011 they’ve had remarkable success, winning three league titles and two Norwegian Cups.

This season, however, the team is off to a slow start and sits in sixth place, five points out of a Europa League spot for next year. Despite that, there is a confidence that the club will turn it around.

“Right now it’s very positive,” Horvath said. “We’re getting into the second part of our season now and we’ve gotten good results lately. We’re on the up because in the first part of the season we didn’t get the results we wanted. I think we all think we should be higher up in the standings than we are. Everyone is looking forward to the Champions League because everyone thinks we have a realistic chance of moving on if that’s Champions League or Europa.”

It has been a long and difficult road for Horvath who is now finally seeing his returns for his hard work. He was recruited to join Molde by Ole Gunnar Solskjaer in 2011. The Norwegian and Manchester United legend rated Horvath so highly that he brought him over to Norway at the age of 16, with Horvath’s parents moving there as well to comply with FIFA regulations about signing minors.

“I’ve been here for almost three and a half or four years,” he added. “I believe it was the best decision we could have made because from 17-18, I really started to develop myself until now. When I look back at it, I couldn’t be happier because at Molde FK over the past four years we have won three trophies. So to be their number one is a great honor.”

With about 26,000 people, the town of Molde is one of the smallest in the Tippeligaen and Horvath admits there isn’t that much to do and he spends much of his free time hanging out with teammates. He loves the scenery and the way of life in Norway and even though the move was difficult for him in the early years, he is very happy with how it turned out.

“At the beginning I wouldn’t say there was much disappointment or frustration [not playing] because at the time I was very young and still learning a lot,” Horvath explained. “Orjan was Norway’s number one, so it was a great privilege to be on the bench and see how to operate everything: getting ready, warmups, how to act. But being the number two, you have to be ready for anything. When I was the number two, I was always preparing myself as if I was going to start every game.”

Horvath’s closest friend on the team is fellow American Josh Gatt, who has been injured most of the past two season but has also been with the club since 2011. Gatt insists the team is excited to have Horvath as the first choice keeper.

“The team fully supports Ethan as our new number one,” Gatt said. “He has worked and trained very hard for this. But it’s not over for him. He has to continue to work to keep his spot. I believe Ethan can be a fantastic goalie and he is well on his way to that.”

In addition to the Champions League, Horvath is aiming high internationally. He was slated to be the backup ‘keeper at the U-20 World Cup behind Steffen but at the last moment Molde refused to release him for the tournament.

It turned out to be a blessing in disguise because Nyland picked up an injury in the middle of a Tippeligaen game and Horvath made his debut, setting the stage for the club to be confident with Horvath after Nyland was sold. Now he will play in a Champions League at Aker Stadion in Molde.

While he was disappointed not to head to New Zealand, he is now aiming to push for a spot on the U-23 national team that this fall will try to qualify for the 2016 Olympics in Rio de Janeiro. Right now, the most obvious candidates for that squad are Cropper and Steffen but neither of them has played a single professional game. Horvath is hoping that as Molde’s starter and with the big game experience he is going to pick up, he can rise in the pecking order.

“It was a difficult time,” Horvath said of missing the U-20 World Cup. “Of course I would have liked to have gone because it was a world cup. But I had to respect my club’s decision because they wanted me to stay behind. It actually did happen where our number one got injured and I got to play league games. I think if all goes well with me playing for Molde right now, you never know what will happen. I have thought about it and maybe I do get called into the U-23s. Maybe I get to fight for an Olympic spot which would be a great honor.”