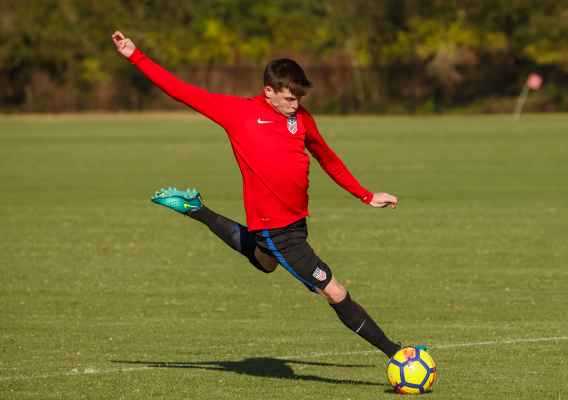 Born and raised in Connecticut and the son of a former college star, Ian Hoffmann's youth career began in a traditional path stateside. But a move to Germany has seen him take impressives steps forward and last week he was one of the big winners at U.S. Soccer's 2018 Youth Summit in Florida. ASN's Brian Sciaretta talked to Hoffmann about his rise.
BY Brian Sciaretta Posted
January 14, 2018
11:25 PM
U.S. SOCCER'S 2018 YOUTH SUMMIT is now completed and it offered the federation’s youth teams a chance to evaluate over 150 players form the U-16 level through the U-20 level. There were many kids who saw their stock increase and one such player was Ian Hoffmann of the U.S. U-18 team.

Hoffmann, 16, arrived in camp with one of the more interesting stories. Born and raised in Connecticut, Hoffmann now plays for Karlsruher SC where he leads the U-17 team in both goals and assists in the U-17 Bundesliga.

“It's an amazing experience. Really amazing,” Hoffmann said of his experience at the Youth Summit. “Just the fact of having all the best young players in the country and all the best youth coaches in the country here as well. It's really been an honor for me and a great chance for players to showcase themselves, for everybody to meet each other, and to try to assert themselves to get on the team moving forward. It's a great idea for U.S. Soccer.”

Coming from a family with strong ties to the game, Hoffmann’s father, Andrew Hoffmann, had a storied youth career in New Jersey at a time when the state was a hotbed of American soccer producing players such as John Harks, Tab Ramos, and Tony Meola.

The elder Hoffmann went on to star for Georgetown University where he is school’s Athletic Hall of Fame. Afterward he would play professionally for the Penn-Jersey Spirit and the Washington Stars of the defunct APSL.

“Since I was two I was following my dad's game,” the younger Hoffmann said. “I was took bits and pieces from his games. I've been around the game from a really young age. My dad was taking me to his games three to four times a week. So being around it when I so young, I really picked up on it and developed a true love for it. Having him being a great player really helped me.”

But Hoffmann also says that in addition to his father, he has been fortunate to also have other positive influences and coaches at the youth level which began at Everton FC Westchester followed by a stint at Beachside Soccer Club in Norwalk. After that, he joined the New York Red Bulls Academy where he played alongside players such as 2017 U-17 World Cup midfielder Chris Gloster.

But a few years ago, Ian’s fathers work opportunities presented a chance to go to Germany.

“The amount of sacrifice he is making to chase his dream is just unbelievable,” Andrew Hoffmann said. “[My wife] Patti and I are so proud. With the national team, it's just an honor. He is humble just by being invited. He loves going because he loves to represent his country. He talks about wearing the crest and the feeling of hearing the national anthem. He also likes to uses it as way to measure himself next to the top players of his age group. As a parent it is just special to see how the time and effort Ian has put in gets recognized. Everyone knows he still has a long way to go but it's special.”

Ian Hoffmann says the move forced him to grow up very quickly.

“It was kind of like getting pushed into the deep end to start,” Ian Hoffmann said. “Having to learn a new language is obviously very difficult to start. It wasn't very easy either for my mom or my brother as well. But it really made me grow up and mature as well - not just as a soccer player but as a person I've really developed as well. I really enjoy it too. I love living over here and I hope to stay here awhile.”

All indications are that he will indeed stick around in Germany. After moving from 1. FC Cologne to Karlsruher SC, Hoffmann has begun to achieve some impressive feats. In addition to being the leading scorer for Karlsruher’s U-17 team, Hoffmann also received two call-ups in 2017 to Germany’s U-17 team - the first in August and the second in November. He was eligible for Germany through his father's German parents.

It is well-known that Hoffmann is not the first American player to have represented Germany at the youth level but in most situations it was when the player had an American father in the military and the player was almost entirely raised in Germany. Never before has it happened to an American player who was both born and raised in the United States.

“It's was really an honor just to be able to play with two different national teams and their best players was special,” Hoffmann said of the experience of playing for Germany. “It was a great opportunity and I learned a lot.”

But for now, Hoffmann is focused on the United States and being part of a strong youth movement that is looking to build towards the future. Eligible for the 2021 U-20 World Cup, continued success could potentially see Hoffmann make a case to play up an age group.

At Karlsruher, Hoffmann plays as a No. 10 playmaker where is given freedom to roam and create. With the U.S. U-18 team, however, he played in a different position as a right back and still was one of the team’s best players. (As Hoffmann noted on his position: “Of course I have a lot to work on but attacking is what I love. I also think versatility is one of my strengths.”) If he were to push up an age group into the current 2019 U-20 team as a right back he would have to move past N.C. State's Manny Perez and Ajax's Sergino Dest.

“Ian had a very good camp,” said U.S. U-18 head coach Omid Namazi. “We used him as a right back and we knew he had played both on the outside or internally in the midfield but I feel he is best suited as a No. 2. He showed great poise and good technical ability on the ball. His timing was also very good with his runs forward. All and all I felt he has progressed a great deal since I saw him in the spring of last year

The Youth Summit was designed as a way to kick off the two-year cycle for each of the age groups and Hoffmann left Florida very optimistic for the future of the U.S. program. Compared with what he sees on a daily basis in Germany, he was impressed by the talent he was surrounded by in Florida.

A common talking point of discussion among the players was the fact the U.S. team missed the World Cup, but Hoffmann echoes the familiar tone that his generation is not discouraged but rather highly motivated, an optimistic, for the opportunity to set a new tone within U.S. Soccer.

“I really think that the U.S. right now has a lot of potential,” Hoffmann said. “Even with the kids I'm playing with now on the national team have really shown me how good they can be and how good they are. It's an honor to even play with them because there every one here has such quality. You never have a doubt why any of them were called in.”

“With most people I talk to and my own personal opinion is that missing the World Cup is motivation to strength the system to give it our all to get our country to be among the best,” he added. “We saw with the U-17s that they could compete very, very well. The U-20's did well too. So we want to keep that going.”