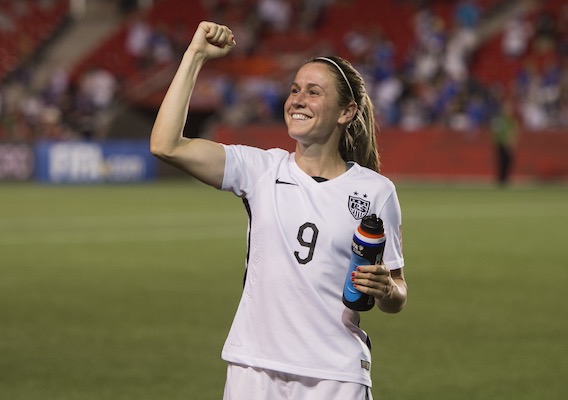 The 31-year-old has 227 caps but her enthusiasm for the U.S. women's national team is as strong as ever. As John D. Halloran learned, O'Reilly is determined to help bring home Olympic gold this summer.
BY John D. Halloran Posted
January 09, 2016
6:00 PM

AS THE UNITED STATES women's national team enters this year’s January camp in preparation for Olympic qualifying, it does so with a shocking loss of veteran experience and missing a group of players that formed the backbone of the U.S. squad over the past decade.

In their stead, the most experienced American at camp is longtime veteran Heather O’Reilly, who enters 2016 with an impressive 227 caps. Speaking to American Soccer Now, O’Reilly admitted the roster shakeup presents a challenge for the U.S. but she also sees it as part of the team’s constant evolution.

"To say that [camp] doesn't feel different would definitely be a lie,” said O’Reilly. “Some of those core players have been in this team for the last decade. So of course there's a bit of a transition, but I do think that the core team from the World Cup is still here.

“I think that there are a lot of torch bearers in terms of carrying a tradition, and carrying an identity, and carrying a culture that we're very proud of. We're also very proud of younger players coming in and that's the future of this team. It definitely feels a little bit different, but this team always evolves and always moves on and finds a way to be successful. And that's what we've been doing for the last 20 years essentially. It feels a bit different, but in a good way. I think that everybody views this as a new chapter for the team and as a natural progression."

O’Reilly debuted for the U.S. in 2002, less than two months after her 17th birthday. Over the next decade-and-a-half she played in three World Cups and three Olympic games. Now, as the team pursues its fourth consecutive Olympic gold medal this summer in Rio—a journey that begin with a friendly against Ireland on January 23 (2pm PT, Fox Sports 1)—O’Reilly knows her leadership is needed, particularly with the recent infusion of young faces.

"I've been on the team a long time. I know there's a responsibility in terms of being a leader,” she said. “I think first and foremost, it's about leading by example. The way that I conduct myself and approach training every day is, hopefully, in a positive manner that some of these younger kids can look at and say, 'OK, I guess that's what it takes.'

“I'm just trying to be myself and, of course, take some of these younger players under my wing. When I was a young player like Mallory Pugh—who's only 17—Mia Hamm and Julie Foudy, they did that for me. I think it's a fine line helping these players out, but then, at the same time, showing them what has made us great through the years and what the standards are here.”

Still, the New Jersey native is proud to have played so many different roles for the U.S. over the years and believes this new experience gives her a broader perspective.

"Everybody wants to start and everybody wants to play a lot, but you can only control what you can,” said O’Reilly. “Whatever role I've been given, I've tried to do it to the best of my ability. I'm proud of the fact that I have worn nearly every hat there is to wear—from being the young player, to being middle age, to being one of the most veteran players here.

“From being a starter or a reserve player or substitute player, I've done it all. There's value in that and value in being able to relate to people. I think that helps me on this team and it helps me in life as well."

Through the years U.S. fans have come to appreciate O’Reilly's unmatched work rate. The winger displayed that quality once again when the American squad opened camp this week in Carson, Calif., as O’Reilly set the national team record in the infamous BEEP test.

The multi-stage fitness test, so dreaded by some players that it is known as the BLEEP test, is a series of 20-meter runs—started by an electronic beep—that slowly increase in speed and frequency. O’Reilly said her motivation for coming into camp in such good shape this time around was her desire to add a fourth Olympic gold medal to her resume.

"I've always focused on things I can control," the University of North Carolina alumnus said. "I'm fortunate to have a good base of speed and endurance. That's something from an early age I knew that I could control and bring to every team I was on and I take a lot of pride in it. This is just a crucial time for all of us to be at the top of our game.

“As soon as the World Cup ended, we obviously had a lot of time to celebrate and we surely did. But then everybody sort of looked inside and said, 'OK, what's the next step for me and what’s the next step for this team?' From my perspective, I wanted to go for winning another gold medal in Rio this summer. It's about being the best version of yourself, not trying to be anybody else. That's how I've approached these last few months. I was proud to come in sharp to this camp."

In the weeks and months ahead, U.S. head coach Jill Ellis faces some difficult roster choices. First, she will have to trim the 26 players she called into camp down to a 20-player roster for qualifying and, then, an 18-player roster for the Olympic Games.

O’Reilly admitted the competition for roster spots is something the players are thinking about.

“In the back of everybody's minds, that's what we're training for and that's what we're competing for every day," she said. "I think you just have to narrow your focus and worry about the next training session and being your best self every single day. If you do that, and keep good habits at training and keep a good focus and mentality, hopefully the right things will fall into place.”

Another difficult question for Ellis will be how to replace Holiday in the U.S. midfield. There are a number of talented options, but O’Reilly tipped newcomer Lindsey Horan as a strong candidate.

"That’s more of a question for Jill Ellis than myself, but I think a player like Lindsey Horan, who has ample experience playing in Europe the last few years—playing with PSG—has really shown well and shown a lot of poise and experience for being a young player,” O'Reilly said. “I think she's a really exciting young player coming through the ranks that I think the American soccer fan base will really enjoy watching."

On the club level, O’Reilly plays for FC Kansas City and provided the game-winning assist in the 2015 NWSL final with a perfectly weighted left-footed service.

The championship was O’Reilly’s second at the club level, having won a title with Sky Blue FC in 2009 in the now-defunct WPS. In that match, O’Reilly provided the game-winning goal.

Kansas City, like the U.S., is a team in transition. It has lost Holiday, Leigh Ann Brown, and Amy LePeilbet to retirement—and Rodriguez due to her pregnancy. All four were vital cogs in Kansas City’s championships in 2014 and 2015.

However, O’Reilly thinks FCKC’s organizational strength and excellent coaching staff will help the team through the adjustment.

“My experience at FCKC for just the one season was very positive,” she said. “They have people there that get it, that get what it takes to build a championship team. Vlatko Andonovski is the head coach at FCKC and, to be honest, he's one of the best coaches I've had. He's extraordinary. We're dealing with a lot of retirements as well, but with a strong philosophy, hopefully we can find some players that fit in and continue the legacy they've built there."

As Kansas City and the NWSL enter their fourth season—a record for top-flight women’s professional soccer in America—there are still challenges. For one, team budgets are tight and competition abroad is only getting stronger.

O’Reilly recognizes the league’s challenges, as well as the NWSL’s progress so far. She also sees Major League Soccer as a potential partner in the growth of women’s soccer.

"We know firsthand that all these other leagues across the world are getting better and that, in turn, is why their national teams are getting better," she said. "We get that. We feel it. Every year you continue to grow. The addition of Orlando jumping in this year, our 10th team, is something to celebrate.

“It's another MLS relationship which, in my opinion, is the way of the future and an exciting next step. I definitely think you can't overlook these baby steps of success. We've never had year four. You have to be proud of that and like where our direction is going.

“We need to get on TV more,” O’Reilly continued. “Hopefully, a lot of these companies have seen that's it's not only the right thing to do to promote women's soccer, but it's a very smart business move too. I think and hope we've showed people that through our success this summer."

For now, O’Reilly continues to enjoy the journey. Despite two NCAA titles, two club championships, three Olympic golds, and being a World Cup winner, her hunger for the game hasn’t diminished.

"I love winning—that never gets old," she said. "I think that every year presents a new challenge, a new group of players. It's always something new. I love being part of this team. I love competing. I love pushing myself. I love achieving new things. I love the feeling of getting better.

“I still personally feel like I'm improving and adding some elements to my game. That excites me. I love this sport so much. I think that I'm going to be one of those people that plays pickup until I can't move anymore.

“I feel like I have a lot of fire in my belly still and I'm looking forward to the year ahead.”